Hyundai driver Norbert Michelisz sealed the World Touring Car Cup title in the final race of the season at Sepang after rival Esteban Guerrieri dropped back with overheating issues.

Michelisz finished the race - won by double World Rallycross champion Johan Kristoffersson from 22nd on the grid - in fifth position, having eased off when Guerrieri dropped back after his Honda Civic Type R ingested grass while he defended the lead.

Guerrieri had been in a position to claim the title at that point, though, as polesitter Michelisz had slipped to fourth.

The title rivals matched each other off the line and ran side-by-side into the first corner, but Guerrieri braked later than his rival to snatch the lead at Turn 1.

Mikel Azcona also drove around the outside of Michelisz between Turns 1 and 2 to claim second, though that order would still have given Michelisz the title by a point.

The Hungarian appeared tentative on the opening lap, though, and ceded third to Kristoffersson when the Sebastien Loeb Racing Volkswagen Golf GTI driver got a better exit off the Turn 11 right-hander.

Guerrieri survived a robust attack from Azcona through Turns 1, 2 and 3 at the start of lap two, but held the position into Turn 4 as the safety car was deployed so Augusto Farfus's Hyundai i30 N could be recovered from the gravel trap.

It took another three laps for the race to be restarted, with Michelisz immediately going on the attack in an attempt to unseat Kristoffersson and reclaim the third place he needed to guarantee the title.

Though that did not come off, the top four bunched up as Guerrieri struggled to contain the pack behind him.

Things came to a head out of Turn 11, when Azcona got a better exit than the leader.

As he went to nose his Cupra inside Guerrieri on the approach to the Turn 12 left-hander, Guerrieri moved across to close the door - with Azcona hitting the Argentinian as a result.

This sent Guerrieri skating along the grass, though he was able to keep his Honda on the road and in the lead, briefly, as the four leaders approached the penultimate corner side-by-side.

But Azcona got ahead out of the corner, with Kristoffersson launching an attack into the final corner - eventually making the position his into Turn 4 on the following lap. 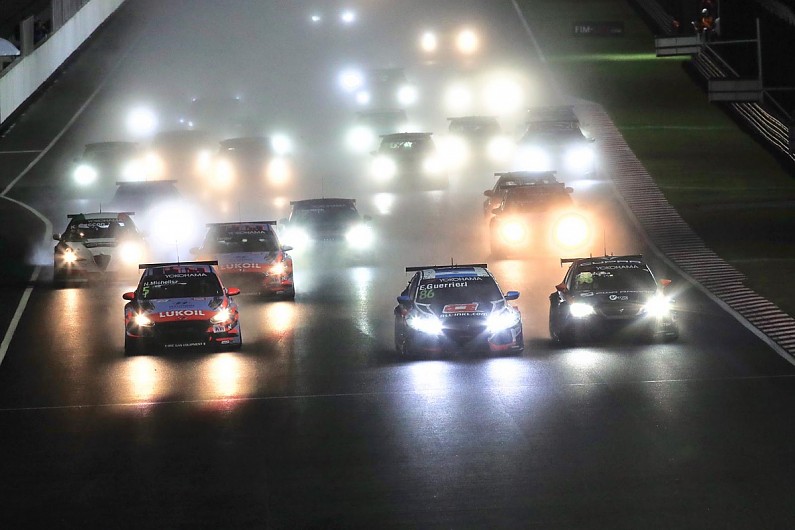 That made Michelisz's task far simpler, though he continued to hound Guerrieri as the Honda began to develop an issue.

Michelisz tapped his rival into Turn 11, and later made a pass stick, to move into third, with Guerrieri then forfeiting a handful of positions on the run to the final corner.

Guerrieri was told to "just keep going, we're hoping for some miracle", but visited the pits three times during a second safety-car period to have grass removed from his splitter.

He eventually finished 22nd, having set the fastest lap at the end of the race.

Safe in the knowledge Guerrieri was out of contention, Michelisz handed positions to Kevin Ceccon (Team Mulsanne Alfa Romeo Giulietta Veloce) and the Comtoyou Audi RS3 LMS of Frederic Vervisch in the middle of the race, and cruised to a comfortable fifth ahead of team-mate Gabriele Tarquini to seal the title by 21 points.

His success means BRC has run the winning driver to the title for the second year in a row, following Tarquini's success last year.

While the title fight fizzled out, the battle for the race win ensured there was still an entertaining end to the race.

Azcona was still in the lead after the second safety car but had put up a strong defence to keep Kristoffersson at bay.

After an entertaining tussle between the top three - now featuring Ceccon - Kristoffersson made his race-winning move around the outside of Azcona at the final corner with four laps remaining.

The lead trio continued to squabble for the remainder of the race, though would ultimately stay in formation as Volkswagen ended its factory-supporting stint in WTCR with a victory.

Azcona crossed the line in second, resisting a lunge from Ceccon at the final corner, but was penalised after the race for his clash with Guerrieri and had 30s added to his time, in lieu of a drivethrough penalty, which dropped him to 14th.

Ceccon, therefore, inherited second ahead of Vervisch, with Michelisz confirmed as champion in fourth.

Tarquini followed his team-mate home over the line but was later handed a 30-second penalty of his own for two safety-car infringements. This dropped him out of the points.