A victory for Norbert Michelisz in Sunday's opener left Guerrieri 27 points behind with 50 available.

The latter reduced his deficit to 10 by winning the reversed-grid second race, after charging from ninth on the grid into the lead in less than half a lap.

Guerrieri then beat polesitter Michelisz off the line to lead the finale, and was on course to snatch the title from his Hyundai rival when he was hit by the PWR Cupra of Mikel Azcona exiting the Turn 11 right-hander.

That ended Guerrieri's challenge as, although he briefly held his lead after a trip through the grass, he was overtaken by Azcona. Johan Kristoffersson and Michelisz followed him through, as his Honda Civic Type R developed an overheating issue. 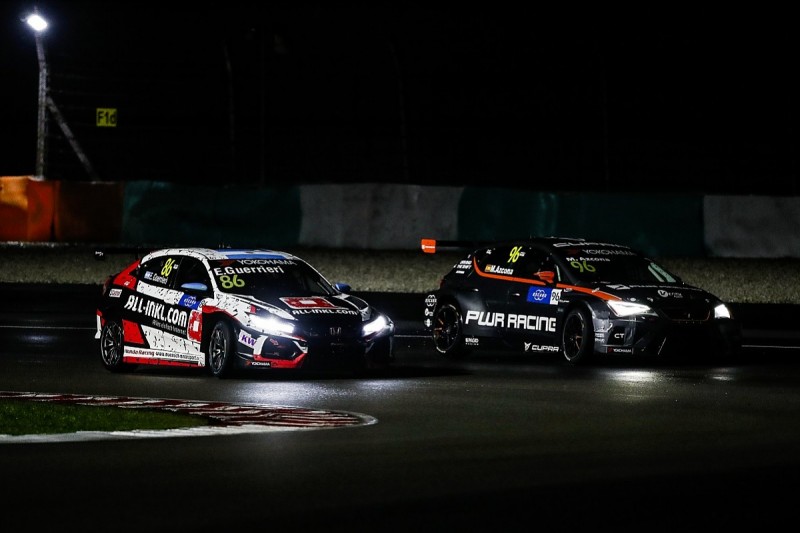 "My first lap in in race two was the best I probably ever drove in a race car," Guerrieri told Autosport.

"I got momentum all around the lap, to overtake cars from the outside of some corners. So yeah, it was great momentum there.

"I just felt flawless, like [I was] really flying.

"I didn't want to stop pushing because I knew the more you push, if also having a little bit of a gap, of margin, but I didn't want to leave too much margin because it was something that I was really enjoying."

Guerrieri and Azcona swapped positions twice on the lap they came together as the Argentinian defended his lead, but Guerrieri said he had worked out the lines he needed to take to pull away when he was hit.

"He overtook me, then I overtook him back, and then he went around the outside of Turns 10/11 and he got good traction as well.

"So then I realised, 'OK, the lines are different now'.

Azcona apologised to Guerrieri for their incident in the post-race press conference, though Guerrieri shook his head while listening.

The Munnich Motorsport driver said he spoke to Azcona, who was penalised 30 seconds for the clash, again after the conference, but that he had not offered "a fair apology".

"But I don't want to talk about that," added Guerrieri.