Evans had led Neuville by 11.5 seconds heading into the powerstage after a stunning time earlier in the morning allowed him to reclaim the lead he lost on Saturday.

But Evans picked up a front-right puncture on the final stage and dropped over a minute, plummeting to third overall. Neuville "pushed like hell" on the powerstage but said he felt his time was "s***," unaware of Evans' heartbreak. 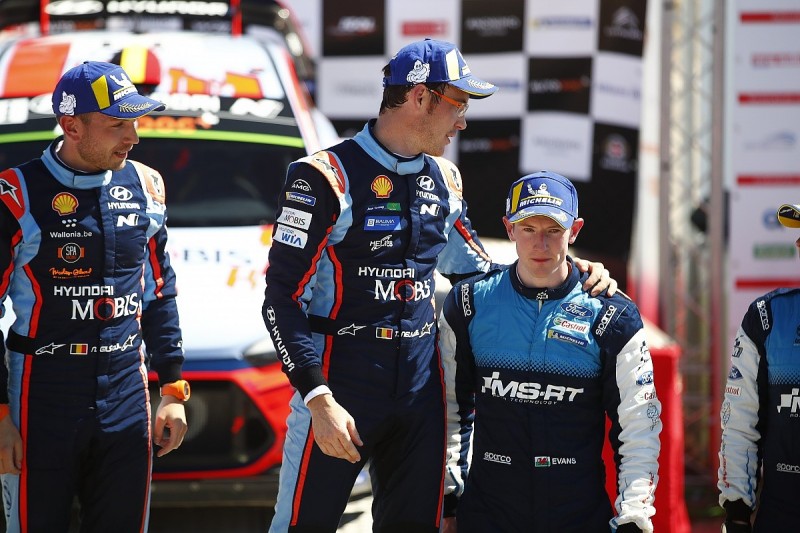 The late drama gifted Neuville his first win of the season and with it the championship lead, two points ahead of Sebastien Ogier.

Defending champion Ogier did not win a single stage all weekend but came home a surprise second overall for Citroen.

Ogier had been tipped by his rivals to be the man to beat in Corsica, but was never particularly happy with the feeling of his C3 despite trying several different suspension set-ups.

However, Ogier stayed out of trouble and snuck his way up the leaderboard to score second.

Evans had hit the front as early as stage one, dicing with Toyota's Ott Tanak throughout Friday to hold a 4.5s lead.

Tanak fought back on Saturday, edging into the lead by lunchtime before his challenge unravelled on SS11 when he picked up a puncture and lost two minutes.

The Toyota driver eventually wound up sixth, falling from first to third in the championship.

Dani Sordo was fourth for Hyundai, scoring important manufacturer points for the team.

The highlight of Sordo's rally came on the first pass of the mammoth 30-mile Castagniccia test, where he took his sole stage win.

He had been running ahead of Ogier for much of the rally only for his brakes to fade on Sunday morning.

Teemu Suninen did exactly what was asked of him by M-Sport and finished the rally without incident. The Finn scored fifth overall, finding the perfect balance between pushing and conserving his Fiesta WRC.

Like team-mate Ogier, Esapekka Lappi was frustrated all weekend as he struggled to get on top of an ill-handling C3 WRC, but the Finn made no mistakes and bagged seventh place for his efforts.

Nine-time world champion Sebastien Loeb's rally was effectively over before it had begun, sliding wide into a kerb on the opening stage. The Hyundai driver lost two minutes as he limped through the test with a broken rear steering arm.

Loeb recovered to eighth, surviving a spin on Saturday morning where he understeered into a ditch.

Kris Meeke's pace promised a much stronger finish than ninth, but he was another to leak time as early as stage one.

The Briton cut a corner and immediately wrecked the front-left tyre on his Toyota, and then made the same mistake against a kerb as Loeb on stage five with similar consequences.

Meeke saved his tyres on Sunday morning to allow for a scorching run on the powe stage, earning him five extra championship points.

Jari-Matti Latvala had a disappointing weekend, with two punctures on Friday and Saturday harming his cause. The Toyota driver ended up 10th, scratching his head at his lack of pace, finishing over a minute and a half behind team-mate Meeke.