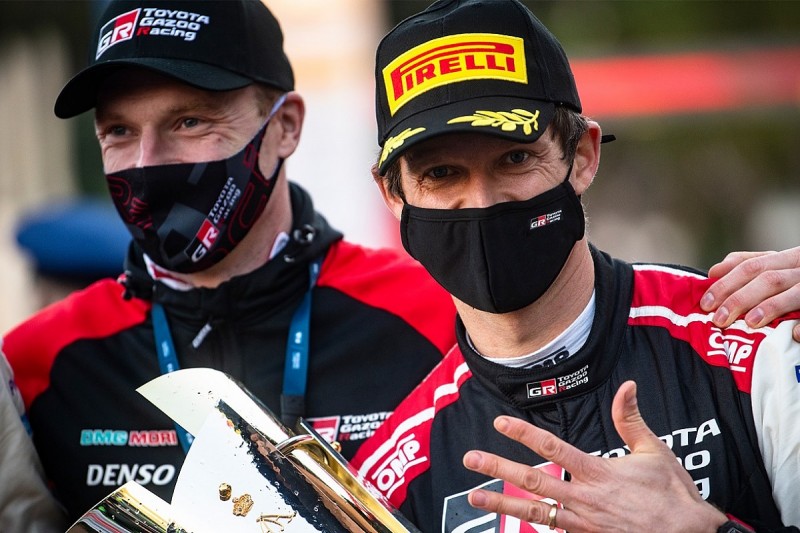 A single loop of two stages run twice apiece greeted the field on their final morning, with crystalline skies and a healthy dose of snow and ice to conjure the classic Monte Carlo backdrop.

Ogier claimed victory on three of the four stages, including the all-important powerstage with its five additional points to be added to both his own score and, for the first time in WRC history, to the manufacturers' championship total as well.

Britain's Elfyn Evans finished second, completing a 1-2 finish for Toyota overall and a 1-2-3 in the powerstage points.

Hyundai's Thierry Neuville fought back from a difficult first couple of days to lead resistance against the Toyota juggernaut, finishing in an eventual third place overall alongside rookie co-driver Martijn Wydaeghe.

The Belgian took a blistering win on the penultimate test of the day but chose to settle for the bottom step of the podium rather than attempting to put pressure on Evans for second.

Kalle Rovanpera's Toyota finished fourth with the Hyundai of Dani Sordo splitting him from the fourth Yaris of Toyota junior driver, Takamoto Katsuta.

At the finish line in Entrevaux, Ogier was brim-full of emotion as he celebrated such a landmark achievement. "It's not a bad end of the weekend," he said.

"The car's been amazing, I really enjoy the weekend, it's been such a pleasure so I think I almost have tears in my eyes now.

"I think it was a good decision to do one more year, the team is great, such a huge thanks I want to give to all of you."

M-Sport's chances of getting on the podium disappeared off the side of a mountain on the opening stage of the rally, alongside the Fiesta WRC of Teemu Suninen.

This left Gus Greensmith to fight on alone to finish in eighth place as the last of the top runners after a performance that he wants to put behind him as soon as possible.

Seventh place overall went to the dominant winner of the WRC2 category, Andreas Mikkelsen, at the wheel of his Tok Sport Skoda Fabia.

Like Ogier, the Norwegian veteran started the event as odds-on favourite and put pressure on himself to dominate the category in his bid to return to a works WRC seat for 2022.

In WRC3, Yoann Rossel survived a late scare after his right rear tyre came off the rim less than half way through the final stage but had enough in hand over his fellow Citroen drivers to claim the win.