Sordo began the afternoon loop 0.7 seconds behind Toyota's Ott Tanak in third, and duly beat his rival by that same 0.7s to draw level with Tanak heading into stage seven.

But the stage seven Castelsardo run was then cancelled as a spectator required medical attention, although the cancellation occurred after the leading three drivers on the road - Tanak, Thierry Neuville and Elfyn Evans - all managed to complete it.

That left rally organisers to decide what notional time should be given the remainder of the field, and it forced Tanak, Neuville and Evans to complete the loop with tyres that were in a worse condition than their rivals.

Sordo went 4.7s faster than Tanak on the next competitive test and 6.5s quicker on the final stage, which means he leads M-Sport's Teemu Suninen by 10.8s overnight.

Suninen made a fine start to his first event with new-co-driver Jarmo Lehtinen, although he will have to fight off a motivated Tanak on Saturday morning who lies just 0.4s in arreas. 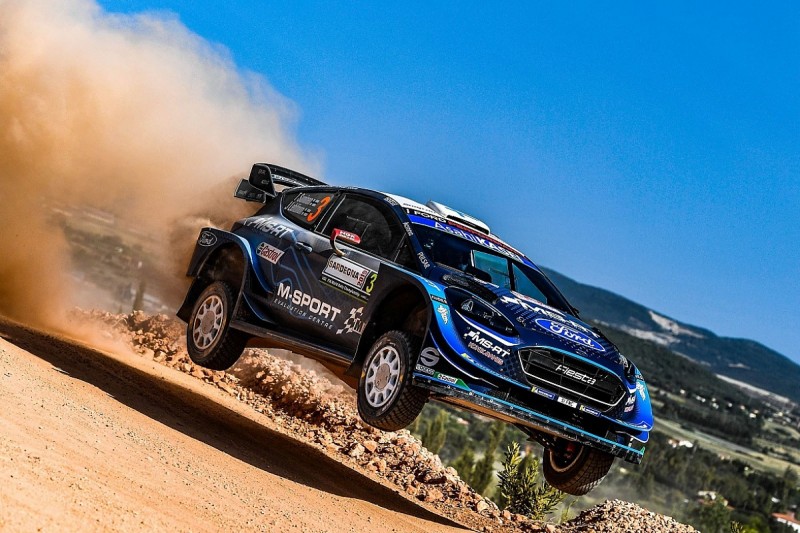 Jari-Matti Latvala had led the rally heading into the afternoon, but his challenge ended on the first test.

He clipped the inside of a tight hairpin on Tula, rolling his Yaris WRC onto its side. Latvala and co-driver Miikka Anttila managed to overturn the Toyota but limped to the end of the stage with a broken windscreen, losing well over eight minutes.

Latvala responded with a fourth fastest time despite no windscreen on the following test, only for his Yaris to veer left and off the road on the Monte Baranta run that concluded the afternoon.

M-Sport driver Evans lost ground when he nudged a bank on stage eight - Tergu-Osilo - and shot into a hedge after struggling to stop his Fiesta.

He managed to reverse out, but dropped 9.5s to Tanak after closing to within 1.2s on the previous stage.

Andreas Mikkelsen lamented his incorrect tyre choice in the morning because "he could have been right up there" as he battled with Kris Meeke.

Mikkelsen blasted to a stage win on Monte Baranta that elevated him past Evans into fourth when the nominal times are declared.

Meeke had a quiet afternoon, keeping his Toyota out of trouble to hold sixth behind Evans.

Neuville and co-driver Nicolas Gilsoul had a "misunderstanding with a pace note" towards the end of Tula; Neuville damaging the radiator on his Hyundai as he lost the rear and nudged a bank as a result.

He suffered a big slide into a right hander early on, narrowly avoiding a hole on the inside bank.

He then overshot a junction later on the stage, eventually completing Tergu-Osilo with no front bumper.

Esapekka Lappi set some encouraging times across the afternoon, but the Citroen driver finds himself over a minute behind the lead in eighth after he knocked a tyre off its rim on Friday morning.

Citroen will consider pulling Ogier out of WRC Rally Italy