Toyota's Kris Meeke kept himself in the lead of his home World Rally Championship round, Rally GB, on a very wet Friday morning

Though Meeke did not win any of the loop's four stages, his consistently quick pace meant he headed for service with a six-second lead over Hyundai driver Thierry Neuville.

Meeke managed to get his advantage up to nine seconds across the opening Elsi and Penmachno stages before a quick spin on Dyfnant meant his cushion was cut to 4.8s.

By that point, his team-mate Ott Tanak had surged up to second as he recovered from the error that had left him down in 13th after Thursday night's Oulton Park curtain-raiser.

Tanak was quickest on Penmachno and Dyfnant but a slower time on Aberhirnant meant Neuville and Jari-Matti Latvala edged him down to fourth - with all three covered by half a second.

Latvala had initially lost a little ground in a brush with a ditch on Elsi before strong times towards the end of the morning brought him up from seventh to third.

The positions behind this podium battle remain unclear as Aberhirnant was stopped due to spectator issues before the full World Rally Car pack had come through. 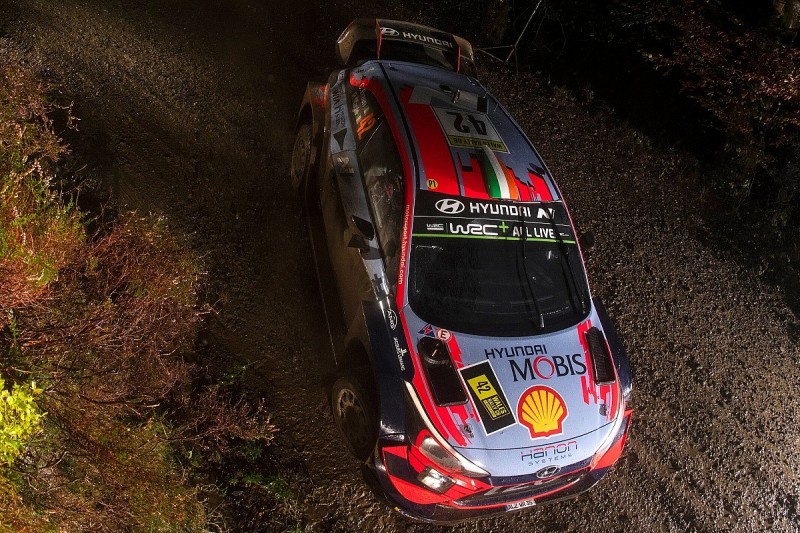 Hyundai returnee Craig Breen is the main contender waiting to see if the stage will eventually be restarted so he can contest it properly or if he will be awarded a nominal time. He had been in fifth place after SS4.

The outcome for Breen will determine whether title contender Sebastien Ogier starts the afternoon in fifth or sixth. The reigning champion is currently 8.8s off the lead.

Elfyn Evans was fastest on two of the four stages - sharing the fastest time on Aberhirnant with Latvala - but is provisionally down in a distant 10th having picked up suspension damage on Penmachno.

The M-Sport Ford driver, in his first WRC appearance since injuring his back on the non-championship Rally Estonia in July, was able to carry out a makeshift repair and has been closing in on the pack since then.

Evans is currently 44s off the lead but back within 16s of M-Sport team-mate Teemu Suninen ahead.

Esapekka Lappi and Andreas Mikkelsen are provisionally seventh and eighth, with M-Sport's third driver Pontus Tidemand still off the pace of the top-class regulars and just outside the top 10 among the leading WRC2 cars.

The R5 cars that had starred at Oulton were swiftly knocked down the order when the full-length stages began, and two of the headline-grabbing additions to the WRC2/WRC2 Pro pack are already out of contention.

Oliver Solberg parked on a bank after what he suspected was a mechanical problem affecting the steering of his Volkswagen, while Hayden Paddon went off the road in M-Sport's latest WRC2-spec Ford.