The BMC Mini rally team of the 1960s revelled in the dark arts of finding every advantage available, but not everybody approved. NICK GARTON reflects on the disputed 1966 Monte Carlo Rally and argues that its vigorous scrutineering was merely fighting fire with fire

The 1966 Monte Carlo Rally is probably the most debated result of any in the history of rallying, knocking even Catalunya 1995 into a cocked hat. After all, what we saw in Spain 26 years ago was an internal squabble between two Subaru team-mates, Colin McRae and Carlos Sainz. But in 1966 there was Anglo-French contretemps to rival Hastings, Agincourt and Trafalgar.

It's fair to say that the French invented motorsport as we know it. The world's governing body sits on the Champs Elysees and France can claim ownership of the concept of Grand Prix racing, hillclimbs, V8 engines, the Monte Carlo Rally and Le Mans 24 Hours: the keys to the kingdom as it were.

Yet this fact hasn't always translated into success for French outfits. Perhaps it's something to do with maintaining the virtue of laws written in France - and it is here that races and rallies are won and lost. More often than not, French teams are beaten by those which have gone through the rulebook in order to discover the 'unfair advantage' - as Mark Donohue put it - that everyone in motorsport craves.

It's generally considered poor form to talk about such things (unless you happen to work in NASCAR, where "cheatin' up a race car" is considered the most marketable commodity in the garage), but the grey areas of the law are where the most successful teams operate. In the rally world of the 1960s, this grey area became the fiefdom of the British Motor Corporation, which wore its shadowy crown with glee.

No small amount of this success must be attributed to Stuart Turner, a man with a planet-size brain and a poacher's mentality. He arrived as the new head of BMC's Competition Department at a time when it had established a reputation for being awfully decent chaps who lost everything that they entered as a result. This would not do for Turner (pictured below, left with Erik Carlsson). 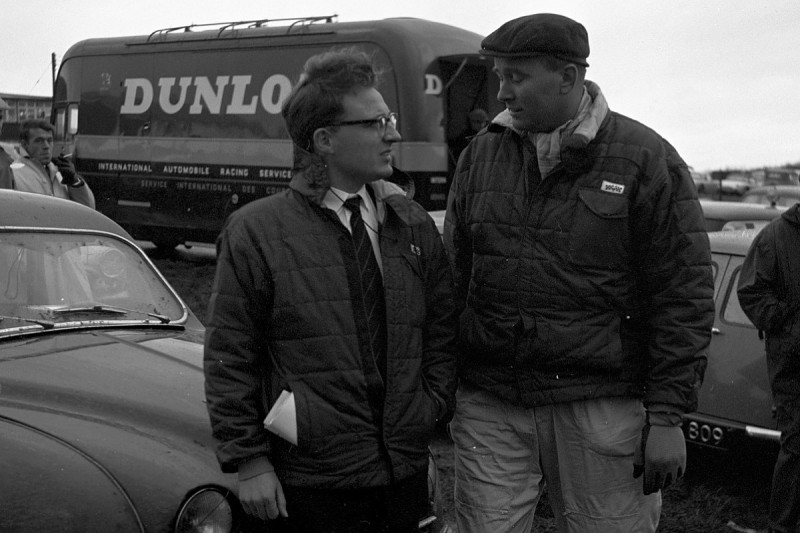 Meanwhile, BMC had launched the Mini in 1959 and it proved an unmitigated disaster. Minis cost more to make than could be recouped through selling them, were designed to meet a fuel crisis which had already abated and which offered limited appeal to a marketplace dominated by rear-wheel-drive and long, masculine bonnets.

What's more, unlike the German 'people's car', it was horribly unreliable: featuring dodgy electrics and a floor which was often bolted together the wrong way round, thereby scooping every drop of standing water inside. Fortunately for posterity's sake, the Mini was also wonderful to drive.

It was Paul Frere, that doyen of motoring journalism, who first realised that the Mini could cope with higher cornering forces than a contemporary F1 car. Another who saw its potential was John Cooper, who fitted a 997cc long-stroke version of its humble 850cc A-Series engine, twin carburettors, a close ratio gearbox and disk brakes.

"It wasn't so much cheating as creativity really, and involved such things as making sure photographs of camshafts were taken from the right angle" Stuart Turner

The resulting Mini-Cooper shot to prominence as a rally car in the hands of Pat Moss, who won the 1962 Tulip Rally outright. Soon its engine swelled to 1071cc by using some highly exotic metallurgy for the times. A short-stroke 998cc engine was also devised. In 1964, the A-Series suite was completed by both a high-revving 970cc primarily for circuit racing and a more muscular all-purpose 1275cc unit.

The prospect of one car running six different engines, from 850cc to 1275cc, handed scrutineers a screaming headache. After all, the best way to get other 'innovations' through pre-event inspection is to present something big and obvious for the officials to fuss over.

As Turner himself put it: "It wasn't so much cheating as creativity really, and involved such things as making sure photographs of camshafts were taken from the right angle so that key features were highlighted (or hidden). And an awful lot of special bits were listed for African markets, but whether any manufacturer ever sold any cars there to fit them on is another matter." 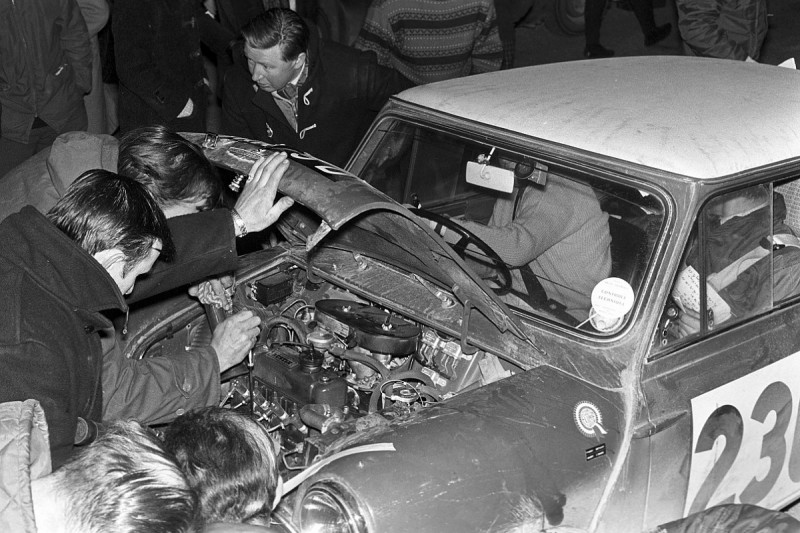 Meanwhile, each event on Turner's watch would be meticulously planned months in advance, with gravel crews running ahead and remote service locations precisely plotted. Even when things went awry, the BMC team had sufficient resources to cover most problems. On a snow-bound RAC Rally, Turner dispatched crew members to find pet shops along the route in order to fashion snow chains from dog leads!

The Mini starred in Paddy Hopkirk's hands on the Tour de France in 1963 against big American Ford V8s and then the same car and driver won the Monte in 1964, before being flown back to London for a greeting from The Beatles at the Royal Variety Performance.

It won the RAC, the 1000 Lakes, the Swedish, the Circuit of Ireland, the Acropolis and others, meanwhile roadgoing Coopers began selling twice as fast as they could be built and even the humble 850cc Austin and Morris variants became socially acceptable.

In January 1965, Timo Makinen delivered what Turner insists was the greatest rally performance of the 20th Century to win the Monte. Mutterings in French began immediately: there could be no hat-trick for these insouciant little cars in 1966. To this end, the regulations were changed to make only Group 1 'showroom' cars competitive.

The first draft of the regulations made no mention of expectations of the headlights. This was, however, superseded by a bulletin, written in French, insisting that headlights should be the same as those on the production model.

The British teams - BMC, Ford and Hillman - all used iodine-vapour single-filament bulbs, rather than the double-filament dipping bulbs found in the showroom models, but they passed scrutineering before the start and again before the second loop through the Alpes Maritimes. 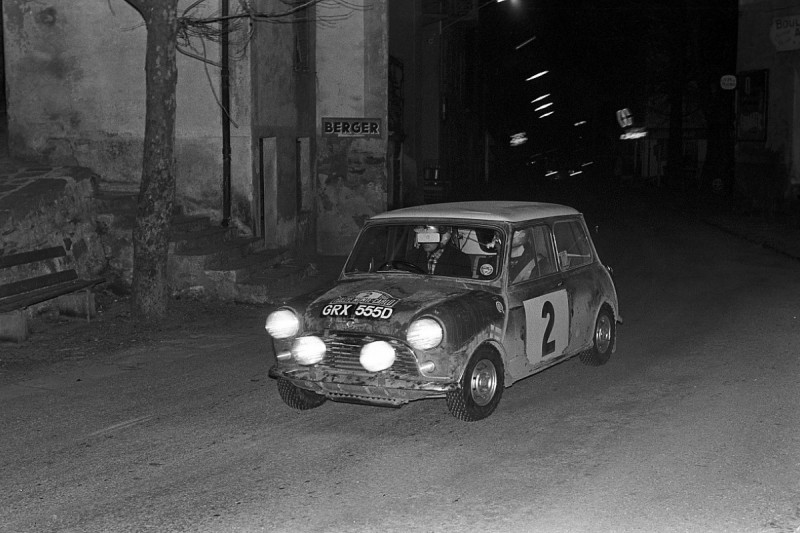 Thus the Group 1 Minis reached Monte Carlo in 1-2-3 formation, with Makinen (above) at their head, while a British youngster called Roger Clark finished fourth in his Ford Cortina and Hillman scooped the Coupe des Dames with its driver, Rosemary Smith. At this point, the Automobile Club de Monaco stepped in.

"They counted all the teeth on the gears in the gearbox," Hopkirk later recalled. "They took the tyres off the wheels and weighed the wheels then weighed the tyres separately. It was ridiculous - they couldn't find anything wrong."

Ah, but they could and did: the headlights. In one fell swoop, the British teams were all wiped off the leaderboard, leaving Citroen's star man Pauli Toivonen (below), who finished fifth, looking rather bewildered as he clutched the winner's trophy, while Frenchwoman Lucette Pointet scooped the Coupe des Dames in another DS.

The court of popular opinion found in BMC's favour, with impartial onlookers around the world declaring that the Minis had been robbed

French cars triumphed, and not just any French car, but the one used to carry President de Gaulle, Prince Ranier and every statesman of the Republic and the Principality. But after the passage of 55 years, can the ACM be blamed for snatching back its crown jewel?

By its own admission, BMC was going to extraordinary lengths to circumvent the spirit of the law in every other way, even as it maintained every letter of it. Ford also inhabited the grey areas of the rulebook to try and get on terms.

French pride was taking a beating and the glittering streets of Monte Carlo were never intended for a utilitarian little oil-leaker like the Mini (which, when it was not rallying, was also the vehicle of choice for Inspector Clouseau, the cinematic French buffoon created by Peter Sellers).

In the end, the court of popular opinion found in BMC's favour, with impartial onlookers around the world declaring that the Minis had been robbed. And then the team returned in 1967 to snaffle one last Monte victory. 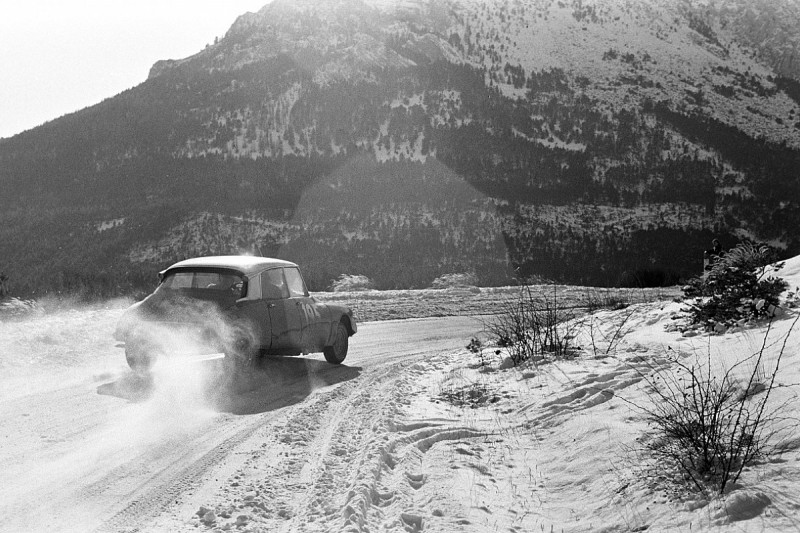