The #8 Toyota TS050 HYBRID was ahead, but due a pitstop, when a second red flag of the race brought an event held entirely in wet conditions to a premature conclusion as low cloud descended on the circuit.

The clock had just ticked past 70 percent duration when the stoppage came, which meant that full points could have been awarded at that point.

It was intended to restart the race for the final 10 minutes of the six hours, but the call came from race control with 14 minutes left on the clock that a result would be called.

WEC rules state that all entered drivers score points even if, like Anthony Davidson in the #8 Toyota, they didn't get behind the wheel.

The victory for the Toyota keeps the title race open going into the penultimate round of the series at Shanghai next month.

Points leaders Timo Bernhard, Brendon Hartley and Earl Bamber only needed to finish ahead of Buemi and Nakajima in their Porsche 919 Hybrid to seal the drivers' crown, but they ultimately trailed home a lap down in fourth.

Buemi and Nakajima had an edge on the opposition for much of a race that was interrupted by five full safety-car periods and one virtual safety car, in addition to the 32-minute stoppage in the second hour.

The winning Toyota moved to the front when the race resumed after the first stoppage.

Nakajima was then able to pull away from team-mate Jose Maria Lopez in the sister car in the early stages of the third hour as the Argentina struggled with a windscreen wiper problem.

The Japanese driver lost the lead when he pitted on three hours, but after the field was closed up by a safety car he was able to pass Nick Tandy for second in the #2 Porsche as the race went green.

Nakajima then moved into the lead when Lopez, who shared the #7 Toyota with Kamui Kobayashi and Mike Conway, made the car's third pitstop.

Nakajima was 16s up on Conway when the safety car was sent out five laps before the red flag.

Conway was fighting off the advances of Neel Jani in the #1 Porsche, in which Andre Lotterer had started, when the race was neutralised and then stopped.

Bamber had not pitted in the #2 Porsche when the first red flag was shown, which meant he had to stop for fuel and tyres as the safety car pulled in after the restart.

The time lost by stopping under green-flag conditions relegated Bernhard to fourth, just over a minute down on the #8 Toyota at the front of the field.

Bernhard then struggled in the wet conditions and was lapped by Nakajima early in the third hour, meaning the #2 Porsche's championship lead is down to 39 points with two rounds remaining.

Prost was running approximately 15 seconds ahead of the Signatech Alpine ORECA driven by Nicolas Lapierre and Andre Negrao when the final safety car came out.

The Rebellion ORECA led for the majority of the race, Senna pulling away from the P2 pack in the opening stages. 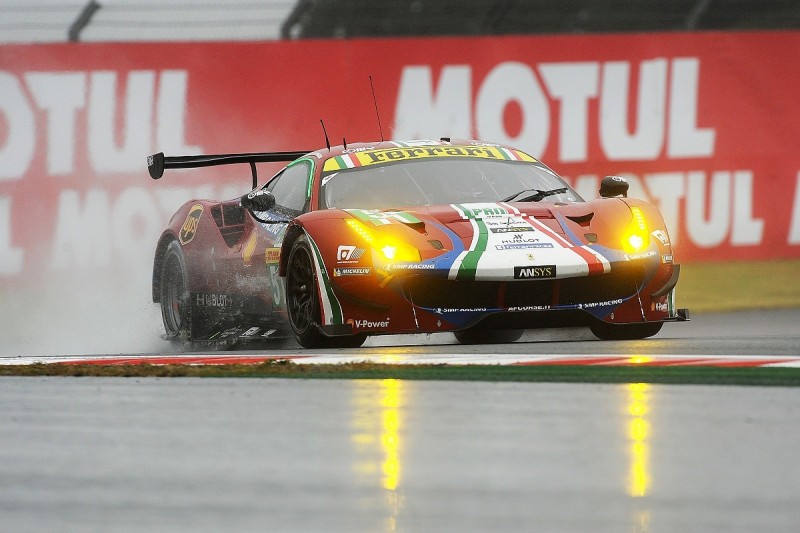 Ferrari took GTE Pro honours after James Calado was able to take the lead in the run-up to the final yellow.

The Briton, paired as usual with Alessandro Pier Guidi in the #51 AF Corse Ferrari 488 GTE, was then able to edge away from Frederic Makowiecki in the best of the factory Porsche 911 RSRs.

Pre-race GTE Pro points leaders Ganassi Ford GT of Andy Priaulx and Harry Tincknell had a torrid time and fell to fifth in the championship after finishing eighth and last in class.

Priaulx was given a one-minute stop-go penalty for running a red light in the pits and then sustained a puncture that sent him into the barriers shortly after an incident with Estre.

They move ahead of the long-time class leader, the Clearwater Ferrari driven by Weng Sun Mok and Matt Griffin when the two cars pitted for what turned out to be the final time.