The new Le Mans Hypercar with which Peugeot will enter the World Endurance Championship in 2022 will be powered by a 2.6-litre V6 twin-turbocharged engine

The announcement of the petrol powerplant was made along with other key technical details of the LMH prototype that will take the French manufacturer back to the Le Mans 24 Hours for the first time since 2011.

Peugeot WEC powertrain director Francois Coudrain said: "The architecture of the Peugeot Hybrid4 500kW powertrain is the result of a highly-detailed brief shaped by the new FIA WEC regulations.

"We initially considered a single turbo, but that would have prevented us from achieving our engine's centre of gravity target.

"A twin-turbo V6 block offers the best trade-off between technology, weight, packaging of the engine's ancillaries, reliability and performance."

The engine will produce more than 680bhp (500kW) and will power the four-wheel-drive LMH together with a with a 272bhp (200kW) front-axle motor-generator unit developed at Peugeot motorsport headquarters on the outskirts of Paris.

The 165kg internal combustion engine powers the rear wheels through a seven-speed sequential gearbox and the electric motor the fronts.

The total power of the delivered by the hybrid powertrain must not exceed 680bhp at any one time except when the motor-generator unit is retrieving energy at the end of the straights, when an increase of three percent to 700bhp is allowed. 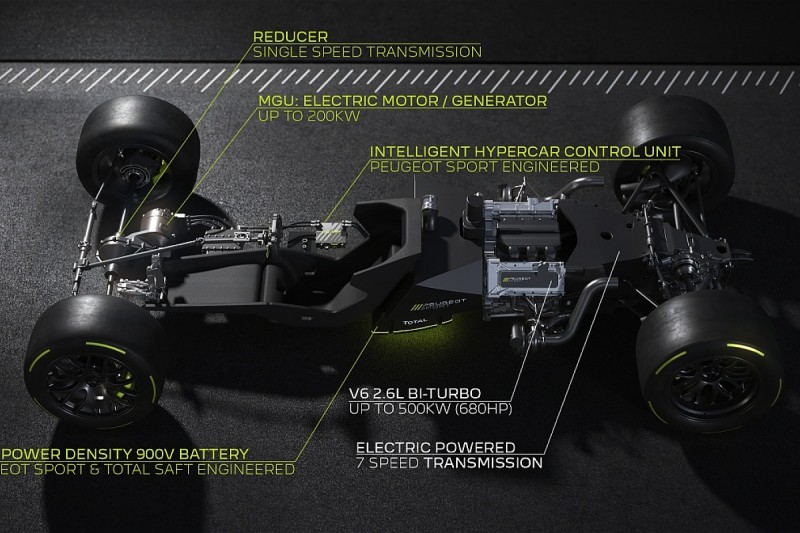 "The motor generator unit will be equipped with a lightweight, high-efficiency single-speed transmission and a latest-generation inverter to transfer battery power to the motor," said Coudrain.

"It will have the capacity to use all the energy available in the battery instantly thanks to the powertrain's energy management system strategies."

Coudrain explained that the Peugeot parent company the PSA Group's experience in the World Rally Championship and in Formula E with the DS brand would be employed in development of the car's software strategies.

The Peugeot's 900V high-density battery is being developed in conjunction with Saft, a subsidiary of Peugeot's lubricant partner Total.

Saft chief technical officer Kamen Nechev said: "The main parameter will be to optimise how the energy stored in the battery is used.

"To achieve this, you need an extremely short charge-time combined with high-capacity storage cells to form a package that enables maximum power to be delivered as rapidly as possible."

The battery will be located in a carbon casing inside the new Peugeot's monocoque as per the LMH regulations.

Peugeot had already announced that its aerodynamic partner for the LMH project is Ligier Automotive.

The powertrain will begin bench testing in the first half of 2021 ahead of the Peugeot LMH car beginning testing at the end of the year.

Peugeot has yet to commit to when it joins the WEC over the course of the 2022 season.

Peugeot: No rush to decide drivers for 2022 WEC return