The reigning world champions followed up on their Nurburgring victory in July in a rain-interrupted race in which all six factory LMP1 cars suffered delays.

The #1 Porsche 919 Hybrid took the lead early in the second hour and remained ahead until early in the fourth hour when the car was given a drive-through penalty for crossing the pit entry line after aborting a pitstop.

That handed the advantage back to the pole-winning #8 Audi R18 e-tron quattro of Lucas di Grassi, Loic Duval and Oliver Jarvis that had led much of the opening hour.

The Audi was in the lead when the rain arrived, but Jarvis went off almost immediately after taking over the car when the front left wheel-bearing failed.

Bernhard survived a late scare when he nudged the wall in the stadium section when the rain returned in the closing stages, but the German hung on to take the flag with just over a minute in hand over the Audi of Andre Lotterer and Marcel Fassler.

Hartley said: "I always said that it would be tight and whoever executed the race best would be on the top step - and that's what happened." 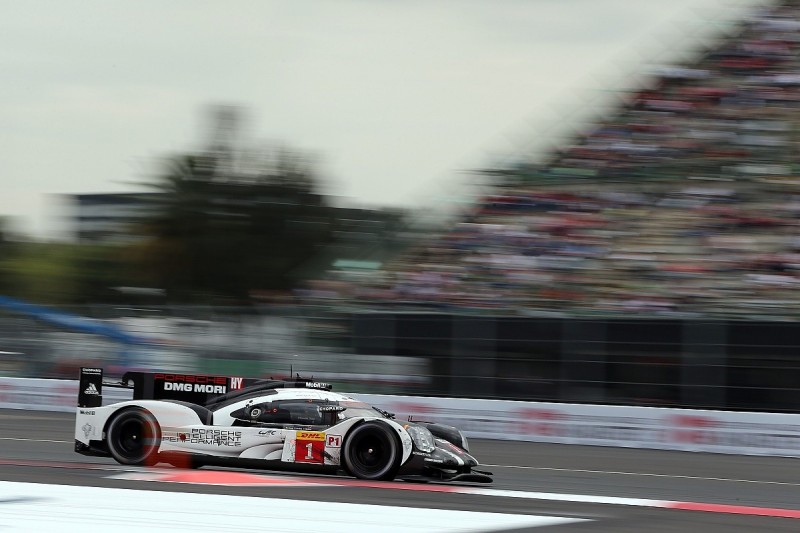 Lotterer led early on before falling behind team-mate di Grassi and then making an early first pitstop when he lost grip.

The #7 Audi then came back into contention when the rain arrived and Lotterer was given Michelin's ungrooved intermediate tyres while the Porsches went onto full wets.

Lotterer was closing on the leading Porsche when a brake problem caused him to lock up and tag the wall late in the penultimate hour, the resulting pitstop for new tyres restricting Audi to second place.

Toyota claimed third with the TS050 HYBRID shared by Kamui Kobayashi, Mike Conway and Stephane Sarrazin despite a drive-through for avoidable contact.

Championship leaders Neel Jani, Marc Lieb and Romain Dumas finsihed fourth in the second Porsche on a day when they were rarely a match for their team-mates in the winning car.

The #5 Toyota driven by Sebastien Buemi and Kazuki Nakajima went out in the second hour with a hybrid problem.

The G-Drive Racing squad looked on course for its first LMP2 victory of the season until misfortune struck again in the closing stages.

Rene Rast, who shared the team's ORECA-Nissan 05 car with Alex Brundle and Roman Rusinov, had a lead of just over 40s with 35 minutes of the race to go when front-right brake failure sent him off the track and then straight into the pits.

Eight minutes were lost to repairs, which dropped the Jota-run car to eighth in class at the chequered flag.

G-Drive's problems turned the race into a straight fight between the RGR Sport Ligier-Nissan JSP2 and the championship-leading Signatech Alpine ORECA.

The Signatech car with Nicolas Lapierre at the wheel dropped behind Filipe Albuquerque in the RGR Ligier in the final hour, but a quick turnaround for the ORECA at the final pitstops halved a deficit of a dozen seconds.

Albuquerque was able hang on to claim a first victory together with Bruno Senna and Ricardo Gonzalez since the season opener at Silverstone in April.

The pair of Aston Vantage GTEs that had qualified one-two dominated until the rain came and then Turner was able to complete a nine-second victory in front of the AF Corse Ferrari 488 GTE of Gianmaria Bruni and James Calado.