Toyota Gazoo Racing has completed a hat-trick of wins at the 2020 Le Mans 24 Hours as Kazuki Nakajima, Sebastien Buemi and Brendon Hartley piloted the #8 to victory

It was a third win in a row for Nakajima and Buemi, who triumphed in 2018 and 2019 alongside Fernando Alonso, and a second win for Alonso's replacement Hartley following his Porsche win in 2017.

For Toyota the spectator-less 2020 edition, in which the predicted rain threat never materialised, was another bittersweet rollercoaster journey. The Cologne-based outfit easily had the measure of the privateer Rebellion competition, but for the third year in a row its #7 crew of Kamui Kobayashi, Mike Conway and Jose Maria Lopez were denied a chance of a maiden Le Mans win due to mechanical issues.

During the longer night phase with the race held in September, the #7 crew disappeared into the garage for 30 minutes to perform a turbo change, an issue which was eventually attributed to a problem on the exhaust manifold.

At that point the #7 car had been leading by a lap after a front-right brake change for its #8 sibling, but then the #7 car lost seven laps and dropped to fourth behind the Rebellions. Further floor damage prevented Kobayashi, Conway and Lopez from recovering lost ground.

The two-car Rebellion team had some issues of its own, including a dislodged nose on the #1 Rebellion R-13 and a slow stop for car #3, but the Swiss outfit came through and looked on its way to score a double podium on its Le Mans farewell.

The #1 Rebellion R-13 of Gustavo Menezes, Bruno Senna and Norman Nato finished second five laps behind the winning Toyota, but the #3 sister car of Romain Dumas, Nathanael Berthon and Louis Deletraz lost a certain podium spot with one hour to go after Deletraz went off at Indianapolis and tagged the tyre wall with his right rear, prompting a six-minute stop to fix a clutch issue.

The fifth and final car in a depleted LMP1 class, the #4 ByKolles ENSO CLM P1/01, retired on Saturday night after a crash for Bruno Spengler in the Esses when his rear wing failed, which curtailed another problematic run for the privateer outfit that was also hit with an alternator problem.

The 24-car LMP2 battle was a much more tightly contested affair for most of the race, in which the two-car United Autosports team proved the class of the field.

The #22 ORECA of Paul di Resta, Filipe Albuquerque and Phil Hanson, which had started the race from pole, took control when the #32 sister car of Alex Brundle, Job van Uitert and Will Owen hit trouble with an oil leak on Sunday morning.

That released the #38 Jota ORECA of Antonio Felix da Costa, Anthony Davidson and Roberto Gonzalez into second place. The #38 crew, which had to make an extra pitstop at night for driver discomfort, hovered around 1m30s behind the leading #22 car for much of the morning. 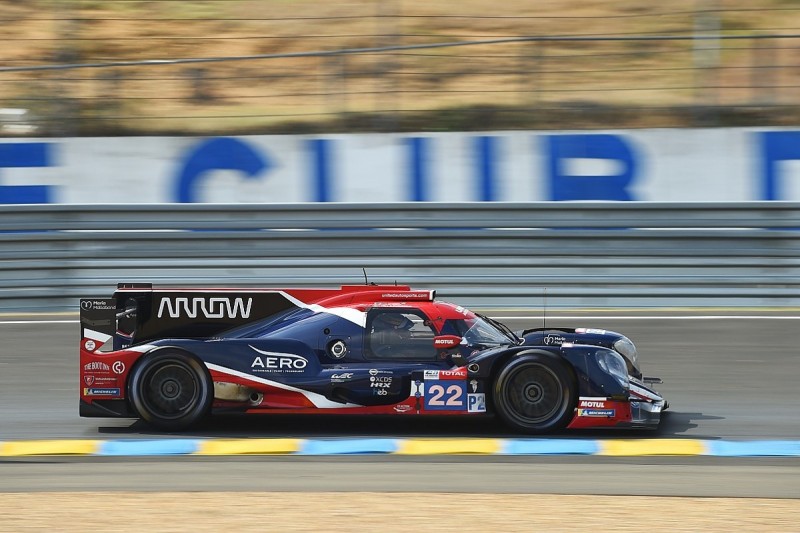 The battle for the class win came to life again in the final laps, when it became apparent that Hanson would need to make an additional stop for fuel. Hanson came out just six seconds ahead of Davidson, but was relieved when Davidson also dove into the pits for a splash with two laps to go.

Hanson brought home the #22 car of the Anglo-American team to the finish some 40 seconds ahead of Jota's Davidson.

The #26 G-Drive Aurus-badged ORECA of Roman Rusinov, Jean-Eric Vergne and Mikkel Jensen, which was hit by electrical problems overnight, was on its way to third until Vergne had to box with suspension damage in the final hour, dropping down to fifth.

G-Drive's delay promoted the #31 Panis Racing ORECA of Matthieu Vaxiviere, Julien Canal and Nicolas Jamin to third. There was more late drama in LMP2 when James Allen suffered a hard crash at Porsche Curves in the #39 Graff, which elevated the #36 Signatech Alpine to fourth despite its early water leak.

There was a highly commendable sixth place in class for the #28 IDEC Sport ORECA, a crew which faced an uphill battle to rebuild the car after a practice crash, lacked track time and was forced to start from the pitlane. Its #17 sister car faced a similar fate and also finished the race. 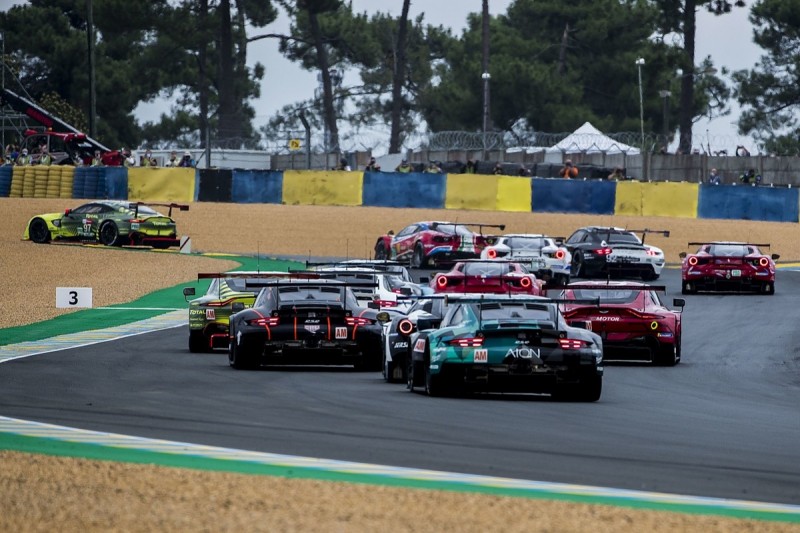 The #97 Aston had a leg up on the Ferrari throughout the morning, a triumphant Lynn crossing the line some 1m40s ahead of his Ferrari rival Calado to gift Aston Martin its first Le Mans GTE Pro win since 2017.

The sister cars of Aston Martin and Ferrari were initially in the hunt as well, but in the #71 AF Corse Ferrari Sam Bird suffered a puncture on Sunday morning, which wreaked havoc on the right-rear corner of the 488 GTE and cost it three laps. The second #95 Aston also gradually lost time, which started on Saturday night when it was delayed under safety car conditions.

The car driven by Marco Sorensen, Nicki Thiim and Richard Westbrook bagged third. The Bird, Molina and Rigon machine was on its way to fourth until it dramatically suffered a broken gearbox on the final lap. The #82 Risi Ferrari finished a distant fourth, as the #71 Ferrari was not classified.

Both factory Porsche entries endured a disastrous 24 hours. Gianmaria Bruni started on pole in the #91 Porsche 911 RSR-19, which made its Le Mans debut, but immediately dropped down the order with an undiagnosed acceleration problem, which also plagued the sister #92 car throughout the race.

The latter also spent a lot of time in the garage with a power steering issue. The #91 car finished fifth ahead of the #92 entry. The #63 Weathertech Racing car retired after Toni Vilander clashed with Nyck de Vries in the #29 Racing Team Nederland ORECA LMP2.

In GTE Am the #90 TF Sport Aston Martin of Jonathan Adam, Charlie Eastwood and Salih Yoluc romped home to a comfortable win to make it a clean sweep in GTE for Aston Martin, after suspension issues for the frontrunning #98 Aston Martin. 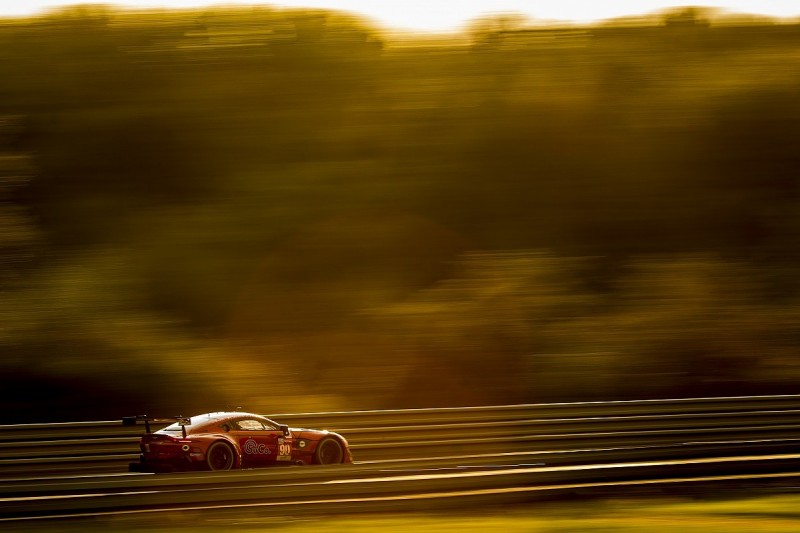 A late safety car bunched up the three cars squabbling over the remaining GTE Am podium positions. In the #56 Team Project 1 Porsche Matteo Cairoli tried to hold off the #77 Dempsey Proton Porsche of Matt Campbell and the #83 AF Corse Ferrari of Nicklas Nielsen, but lost out in the second Mulsanne chicane and Mulsanne corner.

Cairoli tried to retaliate in the Ford chicane, but made contact with Nielsen and remained in fourth.

Autosport 70: The inside story of the greatest Le Mans finish