Toyota remains in control of the 88th running of the Le Mans 24 Hours with four hours remaining, with the #8 crew boasting a five-lap advantage at the head of the field

Kazuki Nakajima, who did much of the 'graveyard shift' at the wheel of the leading Toyota TS050 Hybrid, handed over to Sebastien Buemi with a three-lap lead during hour 17.

That advantage was extended when the leading Rebellion R-13, the #1 car of Bruno Senna, was forced to pit in hour 19 due to a problem with the front nose.

The Swiss car was pulled into the garage to allow the mechanics to attend this issue, which was made harder to fix by one of the mounting points becoming twisted.

Gustavo Menezes took over at the wheel of the #1 machine but dropped behind the sister #3 car, which ran second in the hands of Romain Dumas at the 20-hour mark. The two Rebellions ran 15s apart, but five laps in arrears of the leading Toyota.

The #7 Toyota, which lost half an hour in the night as the team replaced the right-hand side turbo, circulates in fourth, seven laps down on the sister car.

United Autosports' #22 ORECA continues to lead the LMP2 class, with Filipe Albuquerque having been two minutes clear of the #38 JOTA Sport car of Antonio Felix da Costa until taking a pitstop just a few minutes shy of the 20-hour mark.

JOTA's silver-rated driver Roberto Gonzalez struggled to maintain the pace of his opposite number in the United car, Paul di Resta, with the gap between the lead two cars growing by around a minute during the Mexican's stint.

The G-Drive ORECA of Jean-Eric Vergne continues to circulate in third and a lap down, following its earlier ECU troubles, followed by countrymen Nico Jamin for Panis Racing and Thomas Laurent in the Signatech Alpine car, which has broken back into the top five. 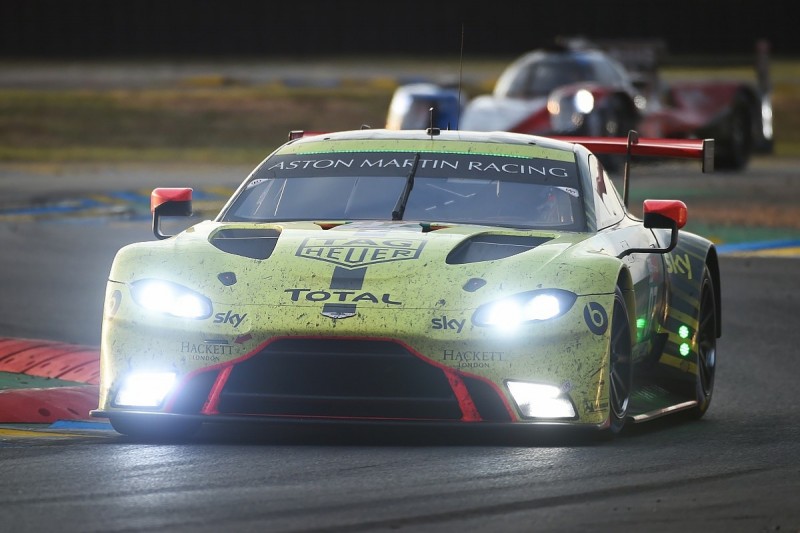 In GTE Pro, Aston Martin's lead #97 car holds a 40-second advantage over the #51 Ferrari, helped by a brake change for the latter.

The two cars were locked in battle at the start of the 17th hour, with Harry Tincknell passing Daniel Serra for the class lead just after the latter's pitstop. Tincknell pulled a gap of 16s over the Ferrari, but that advantage was whittled down to just a few seconds when James Calado took over the #51 car.

But, not long after Calado took over, the Ferrari was set back by around a minute due to its brake change, and now circulates 40s behind the #97 car.

The #95 Aston remains a lapped third, with the #71 Ferrari a further two laps back in fourth place and the Risi Ferrari in fifth following Sebastien Bourdais' earlier spin, which was caused by a broken front-right damper.

In GTE Am, the TF Sport Aston Martin continue its serene run at the head of the field, with Jonathan Adam back at the wheel and a lap clear of Francois Perrodo in the #83 AF Corse Ferrari. Riccardo Pera was only a further six seconds back in the #77 Dempsey-Proton Porsche, and 22s clear of Matteo Cairoli in the #56 Project 1 Porsche.