All the Toyotas hit trouble during last weekend's race, with the #7 TS050 HYBRID - which had led comfortably - grinding to a halt with a clutch problem and the #8 car spending two hours in the pits with a front motor issue.

The #8 car did complete the race but finished ninth overall and nine laps down, while the winning #2 Porsche also lost more than an hour in the pits with a similar front-axle drive issue.

Hybrid systems have been used by manufacturers at Le Mans since 2012 when Audi gave the R18 e-quattro its debut, with every winning car since using hybrid power.

But Toyoda questioned the suitability of the technology for the full 24-hour distance after the troubles of the 2017 event.

"Both Porsche and we, Toyota, were not able to complete without incident 24 hours of driving in the hybrid cars that we put to the challenge on the roads of Le Mans," he said.

"Even the winning car #2 and our #8, which completed the race, were forced to undergo time-consuming, trouble-caused repairs, before struggling to cross the finish line.

"While the hybrid technology that has advanced through competition in the World Endurance Championship puts its abilities on display in six-hour races, it might be that it is not yet ready for the long distance of the 24 Hours of Le Mans." 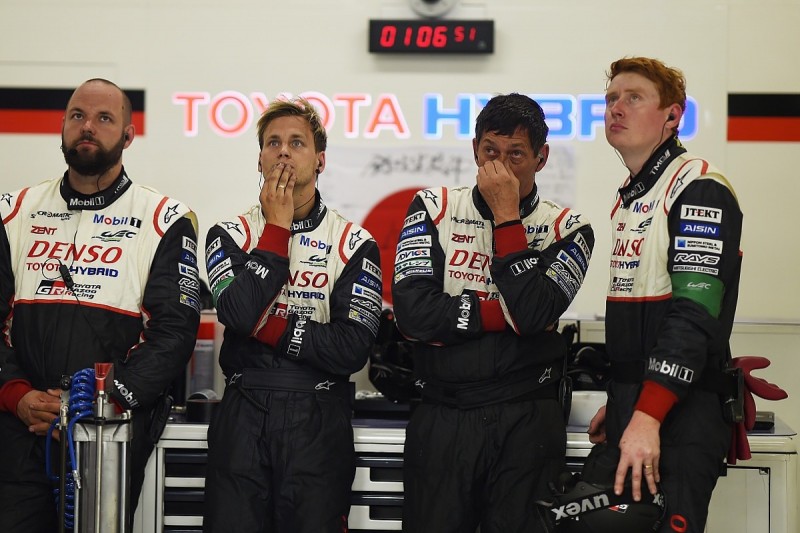 But Toyoda added Toyota would persist with its hybrid programme in the "precious laboratory" of Le Mans and the World Endurance Championship, as development of it is relevant to its road car projects.

"The power of electricity is absolutely necessary for cars to take on a more emotional presence," he said.

"Le Mans is a precious laboratory in which we can continue to take up the challenges related to the technologies involved, putting such technologies to the test in an extreme environment.

"We will hone our technologies even further and ripen them to provide our customers.

"And we will go on making effort after effort so that we can continue making ever-better cars."