McLaughlin appeared to have a first title in his grasp when he won Saturday's opener and Whincup was left 13 laps down in 21st following first-lap contact with Michael Caruso that broke a steering arm.

That left Whincup, who had led by 30 points ahead of the weekend, 78 points down with one race to go, and also wrapped up the teams' championship for McLaughlin's DJR Penske Ford squad in only Penske's third year in Australian racing.

But in a breathtaking final race, McLaughlin was dumped outside the top 20 twice thanks to penalties before being slapped with a post-race drive-through for a clash with Whincup's Triple Eight Holden team-mate Craig Lowndes on the penultimate lap.

While McLaughlin crossed the line in the 11th required to win the title, the post-race drive-through penalty bumped him back to 18th.

That meant race winner Whincup was crowned Supercars champion for a seventh time.

"I didn't have a clue. I crossed the line and I assumed I'd come second, and the crew goes 'you've got number one'," said Whincup.

"What a rollercoaster. We fought hard, didn't have the quickest car all year but it's all about teamwork. Sport's all mental. I'm rapt, couldn't be happier." 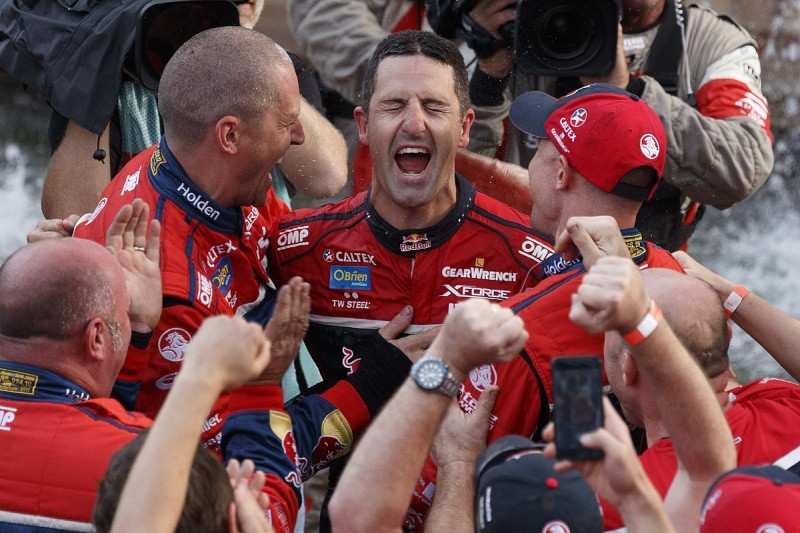 McLaughlin had led the opening stint from pole, keeping Shane van Gisbergen at bay until the pair both pitted on lap 14 of 95.

That was when McLaughlin received his first drive-through for speeding in the pitlane and dropped outside the top 20.

He charged back and was battling with Simona de Silvestro for the 11th place he needed when they made contact that earned him a 15-second penalty at his final pitstop, which put him back outside the top 20 again.

While Whincup was allowed into the lead by team-mate van Gisbergen early in the final stint, McLaughlin commenced another charge up the order.

By the time the safety car came out for debris with 25 laps to go, McLaughlin was up to 13th, but in a traffic jam at the restart he hit the back of Garth Tander, lost a place to Scott Pye and sustained bodywork damage from contact with Jason Bright.

McLaughlin escaped terminal damage and was cleared of any wrongdoing, then made the passes required to reach 11th.

But there was another twist to come as he was caught by the third Triple Eight car of Lowndes, who had pitted for fresh tyres under the final safety car.

Lowndes got a run on McLaughlin on the penultimate lap and the pair clashed as McLaughlin moved left to cover his line.

Lowndes hit the wall and went flying into the tyres on the outside of Turn 2, earning McLaughlin the penalty that ultimately decided the title.