The Penske Ford driver was in a class of his own all weekend, adding his fifth and sixth consecutive poles at the Phillip Island circuit and taking all 300 points on offer.

He's now 60 points clear at the top of the Supercars standings, and a whopping 142 points ahead of former leader Jamie Whincup thanks to a disaster of a weekend for the reigning champion.

It was the Red Bull Holden that actually led the majority of the race, Whincup having made the better of the starts from the front-row to get by McLaughlin.

He then spent two stints with mirrors full of McLaughlin, before the Penske Ford finally slipped past at Southern Loop on lap 41 to take a lead he would hold until the finish.

It was later proven that Whincup momentarily switched off his pitlane limiter while leaving the bay after his second stop, which meant a post-race 38-second penalty.

As a result he was dumped down to 14th for the race, while Rick Kelly, who was third on the road, was elevated to second in what was his 500th Supercars start.

Sunday was a similar story for McLaughlin, with an on-track pass needed for the victory after the early leader was dropped back to fourth thanks to pitlane traffic during the first round of stops.

That fourth became second behind David Reynolds as the next round of stops shook out, before McLaughlin pulled a carbon copy of his Saturday move on Whincup on lap 30 to set up the win. 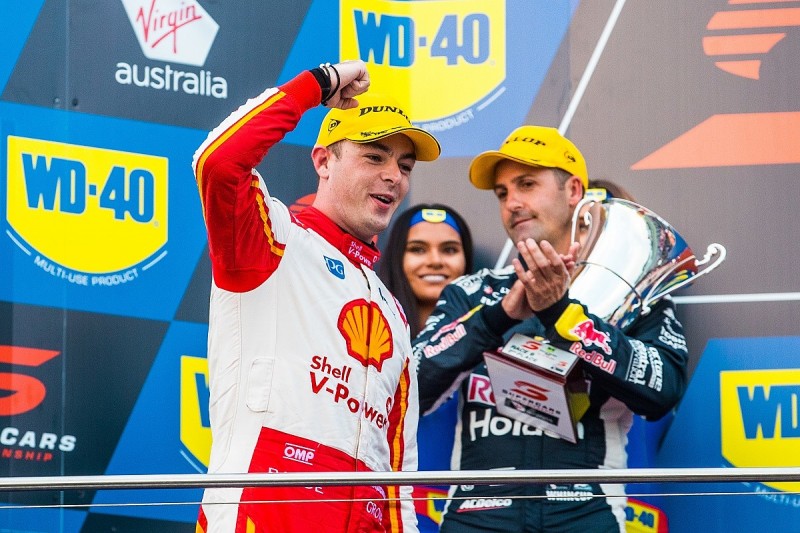 "I've had an awesome rocketship all weekend," he said.

"We had to fight a bit there. [Engineer] Ludo [Lacroix] said to back off just that lap and I said 'give me one more lap and we'll try and get past him' and we did.

"Everyone knows I need to be consistent all year to be able to get it [the championship] done, which we didn't do last year, and today was a good start."

Reynolds came home second, with Kelly, who led the second stint after short-filling on his first stop, capping off a decent weekend with third.

Whincup was well off the pace on Sunday, finishing way down in ninth behind the likes of Fabian Coulthard, Michael Caruso, Shane van Gisbergen, Craig Lowndes, and Chaz Mostert.

McLaughlin now leads Reynolds in the points, with van Gisbergen third, Lowndes fourth, and Whincup slipping down to fifth.