David Reynolds and Luke Youlden will start Supercars' Sandown 500 from pole position, after Reynolds held off a hard-charging Jamie Whincup in the second qualifying race

Reynolds and Whincup staged a thrilling battle in the closing stages of the second 20-lap heat that determines the grid for Sunday's main race, the reigning Bathurst 1000 winner doing just enough to secure pole for the first enduro of the season.

Andre Heimgartner started the second qualifying race from pole thanks to co-driver Aaren Russell's success in the opening heat earlier on Saturday, but the Nissan driver blew his chance even before the lights went out.

Heimgartner crept out of his grid box a handful of seconds early, which was followed up by a sluggish getaway.

That was great news for Reynolds, who got a clear getaway from the outside of the front row and streaked into the lead.

By the end of the first lap the Erebus driver was 2.1 seconds clear of Scott McLaughlin, that advantage going out to 2.6s two laps later when the first safety car was called.

The culprit for the caution was James Courtney, the Walkinshaw Andretti United driver firing into the wall on the run down to Dandenong Road, plucking the right front wheel off his Commodore, and coming to rest in the gravel.

The restart went green on lap eight of 20, Reynolds picking up where he left off. He had little trouble pulling a gap to the two Penske Fords behind him.

The biggest threat to his lead was further back. From sitting sixth at the restart, Whincup went on a charge. He quickly cleared Nick Percat, before pulling off a pair of daring moves at Turn 6 to dispose of Mark Winterbottom and Fabian Coulthard.

On lap 13 he eased past McLaughlin into Turn 1 to take second, leaving him with a 1.3s gap to Reynolds.

With two laps to go the gap was nothing, Whincup glued to the back of the Erebus Holden. But that was as close as it got, Reynolds holding off the reigning series champion by 0.2s.

"It was a bizarre, crazy day, but it was all set up by Luke who did an amazing job for us in the fully wet conditions," said Reynolds.

"We got very lucky with the strategy call. If we were the lead car at that point we probably would have pitted like Anton did.

"Things just organically happened today and we kind of benefited from it.

"That last couple of laps, my rear tyres had gone off, I was struggling a bit and Jamie was a lot faster than me, so I'm ever-so-grateful to get pole." 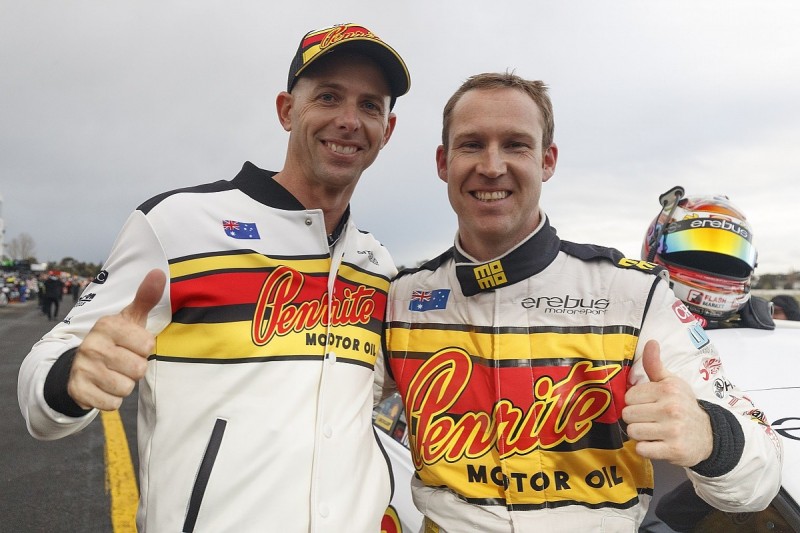 Scott McLaughlin finished the race third, the title contender cruising around just ahead of Coulthard after the pair were passed by Whincup.

Winterbottom was fifth, while Heimgartner came home sixth after his troublesome start.

Lowndes ended up getting the better of that intra-team battle with van Gisbergen, the pair swapping spots a couple of times in the latter stages of the race.

Van Gisbergen had got by Lowndes, a logical outcome given the finely-balanced title fight, but Lowndes hit back on the final lap and squeezed his way back past into 10th.

That means he and Steve Richards will start from the outside of the fifth row on Sunday, while van Gisbergen and Earl Bamber will be on the inside of the sixth row.