It was a battle of car speed over strategy in the first 70-lapper of the weekend, van Gisbergen need to use all of his superior pace to run down McLaughlin in the final stint.

To add to the excitement van Gisbergen was slapped with a five-second penalty for a pass for the lead with 10 laps to go, resulting in a thrilling run to the flag as he tried to stretch the advantage.

He did just enough, too, crossing the line 5.5s clear to secure victory.

That means McLaughlin's series lead has been slashed to just two points, although van Gisbergen will be subject to a post-race investigation for spinning wheels during his second stop.

The race started in dry conditions, McLaughlin holding off a brief charge from van Gisbergen over the opening two laps before easing into a one-second lead.

The first stint was cut short on lap eight, the safety car called after Fabian Coulthard was fired into the wall at the last corner thanks to a scrap with Lee Holdsworth and Richie Stanaway over 13th place.

That meant almost the entire field dived into the pits, McLaughlin maintaining his track position over van Gisbergen while they both dropped behind James Courtney - who had stopped at the end of the opening lap and didn't need to pit with the rest of the field.

Being bottled up behind the Walkinshaw Holden worked well for van Gisbergen, who piled the pressure on McLaughlin for six laps following the restart.

On lap 22 of the 70 he finally got the job done, passing McLaughlin for the effective lead with a bold move at the hairpin.

Van Gisbergen looked quick enough to pull away from McLaughlin, but couldn't find his way past Courtney out front.

He did get side-by-side just before half-distance, but Courtney - not a factor in the title fight - was willing to call van Gisbergen's bluff.

On the same lap Penske opted to get McLaughlin out of the battle and into clean air, bringing him in for a second stop.

It took another four laps for van Gisbergen to finally clear Courtney, which meant he could set off to try and limit the effect of McLaughlin's undercut. 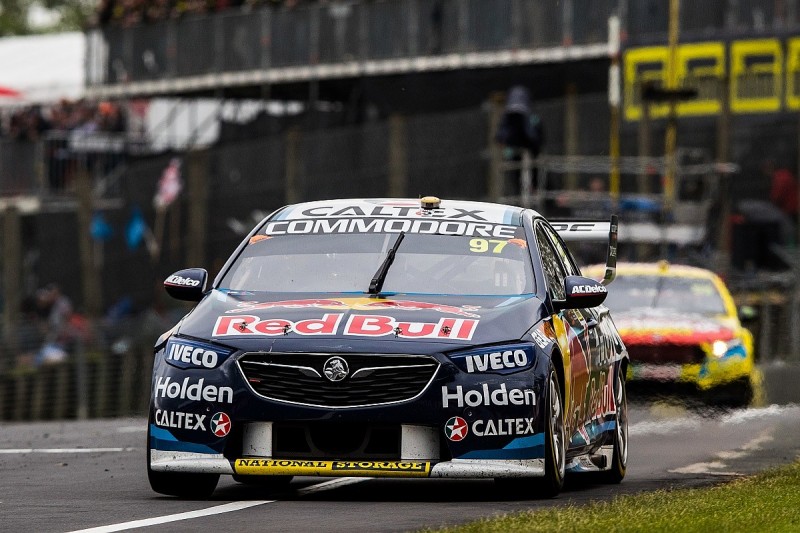 With McLaughlin now with the strategic edge, van Gisbergen opted to run a long second stint in a bid to create a tyre advantage late in the race. But trying to lap David Reynolds proved costly, van Gisbergen bottled up for a second time in the race.

That led to Triple Eight calling van Gisbergen in with 25 laps to go, the Kiwi opting to stay out for another lap before finally yielding to a "pit no option" call from engineer Grant McPherson.

It was a timely call, too, van Gisbergen only just managing to get out ahead of Chaz Mostert.

With the final stops complete, van Gisbergen could set about chasing down McLaughlin's four-second lead on tyres that were 15 laps younger. He made quick progress, but found himself under investigation over spinning wheels during his stop.

Having avoided an on-the-spot drivethrough penalty, van Gisbergen got to within half a second of McLaughlin with 12 laps to go.

Two laps later he was in the lead, van Gisbergen giving McLaughlin a decent nudge at the hairpin before they staged a stunning side-by-side battle coming onto the main straight.

The stewards deemed the initial nudge a little too hard, slapping van Gisbergen with a five-second penalty.

At that stage he was a little over three seconds clear, with four laps to go.

Two laps later it was 4.5s, and by the final lap it was 5.5s and therefore enough to win by half a second - despite van Gisbergen almost running wide as he crossed the line.

"That was one of the coolest races I've ever had," said van Gisbergen.

"We were having a great battle with James Courtney, and the pass with Scotty, he jammed it up quite nice and I just touched the back of him.

"But great respect through the last couple of corners side-by-side and cleared him up over the hill."

Behind the top two, Mostert came home third for Tickford. Reynolds was fourth, while Jamie Whincup had to fight back from 16th after the first stops due to team-mate stacking to finish fifth.

Scott Pye and Cam Waters were next, followed by Nick Percat, Courtney, and Nissan's Michael Caruso in 10th.