Triple Eight's Shane van Gisbergen has escaped any penalty for his controversial wheel-spinning pitstop during his thrilling Supercars race win at Pukekohe, but rival team Penske is protesting

Van Gisbergen won a thrilling battle with McLaughlin at the New Zealand circuit on Saturday evening, having to sprint to the flag after receiving a five-second penalty for contact with McLaughlin.

He managed to pull a 5.5-second advantage to win the race, but did so under the cloud of a post-race investigation for spinning wheels during his second stop.

While many anticipated that van Gisbergen would be given a 35s penalty in lieu of a drivethrough, the stewards decided against any punishment.

That means he keeps his win, and McLaughlin's series lead is still two points rather than the 95 it would have been if he had been penalised.

"Following a review of the broadcast footage from a number of angles and Supercars data from car #97, it was observed that the rear wheels of car #97 did not complete in excess of a full revolution," read a stewards' statement.

"Consistent with previous determinations of the DRD, when investigating if a breach of rule D11.8.8 has occurred, the rear wheels must complete in excess of one full revolution for the imposition of a penalty to be recommended to the stewards." 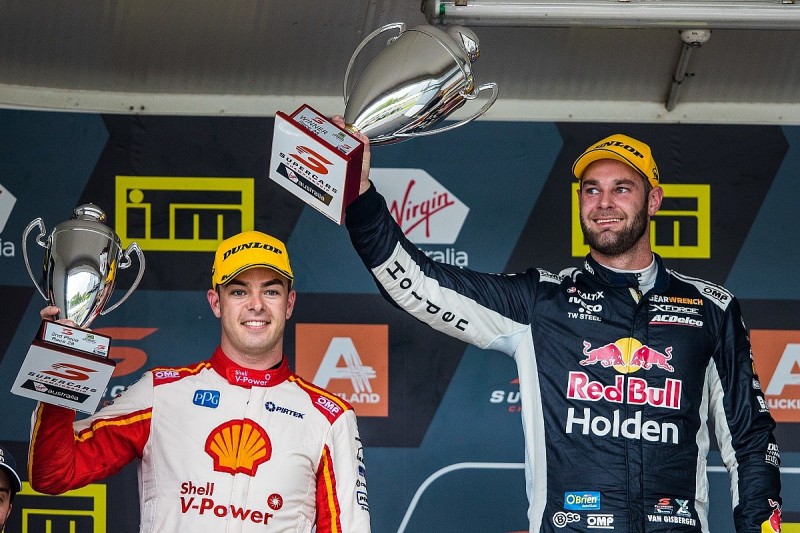 Explaining the controversial stop, van Gisbergen suggested it was a handbrake issue and that he still had the clutch depressed.

"I didn't feel the wheels spin, the clutch was on the floor," said van Gisbergen.

"But I just let my handbrake go a bit earlier than before, and it must have started spinning. I didn't even know about it until after the race."

According to the Supercars regulations, rule D11.8.8 reads: "During any pitstop, from the time the car leaves the ground until it returns to the ground, it is not permitted to have the clutch engaged so as to cause the rear wheels to rotate unless prior approval is given by the S&TD.