Whincup and Triple Eight Holden team-mate Craig Lowndes had been tied on 105 wins since Whincup drew level with a victory in Townsville last month.

His Sydney triumph also moved Whincup to within 12 points of championship-leading DJR Penske Ford driver Scott McLaughlin heading into the endurance element of the season.

Whincup had run second to Chaz Mostert early in Sunday's race but claimed the lead with a well-timed first pitstop just before a caution period.

He lost out to charging team-mate Shane van Gisbergen, who had stopped earlier, with a small lock-up on cold tyres on his out-lap during the second pitstops.

But Whincup overtook van Gisbergen with 10 laps to go and pulled away to win by 9.8 seconds over McLaughlin's team-mate Fabian Coulthard, with van Gisbergen resisting McLaughlin for third.

"I'm not getting too excited about the numbers, but it's certainly a good feeling to get the win today," said Whincup.

McLaughlin has led the championship since winning in Townsville last month, when a first-lap tangle ended Coulthard's long stint at the head of the points. 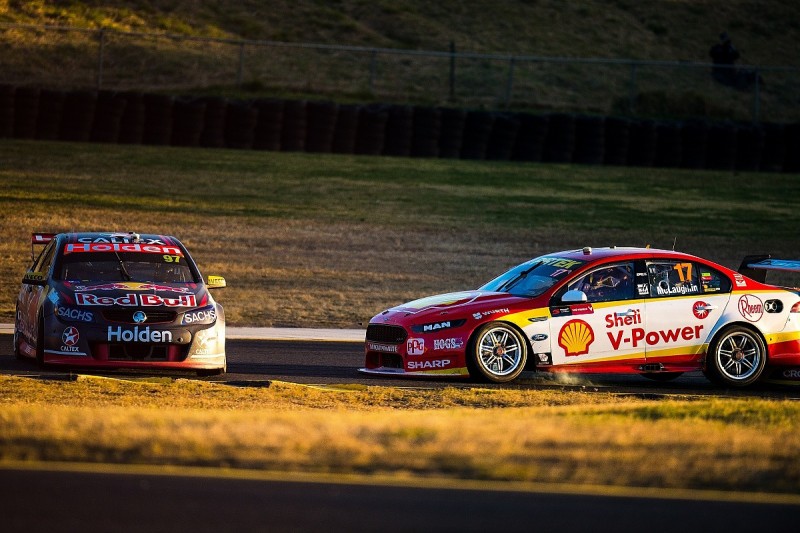 Penalties for a collision with van Gisbergen on Saturday (pictured above) dented McLaughlin's championship lead at the track formerly known as Eastern Creek this weekend.

McLaughlin then equalled Whincup's record of 13 poles in a single season in Sunday qualifying only to tumble down the order with a poor start before recovering to fourth.