Holden has placed the development of the twin-turbo V6 engine that it planned to introduce into its Supercars programme later this year on hold indefinitely.

The V6 engine has been undergoing a development programme split between factory Holden squad Triple Eight Race Engineering, its engine supplier KRE, and General Motors in the US.

The original plan was for it to debut with the brand new ZB bodyshape at the start of 2018, before Holden opted launch the car with V8 power and test the V6 engine with selected wildcard entries later in the season before looking for a wider introduction in '19.

But the V6 has now been shelved altogether, with Holden and Triple Eight confirming that the popular V8 engine will continue into the foreseeable future.

The V6 engine was a long way down its development path, after running a number of times in Triple Eight's 'Sandman' ride car, including a public demonstration at the Bathurst 1000 last year.

According to Holden's marketing executive director Mark Harland, the decision not to continue with the V6 plan has no bearing on the company's commitment to its Supercars programme.

"After working closely with all Holden teams we have decided to put a hold on the development of the V6 Supercars engine," he said.

"We are 100 per cent committed to motorsport and our sponsorship of the Red Bull Holden Racing Team and supporting all Holden teams in both the Supercars and SuperUte paddock." 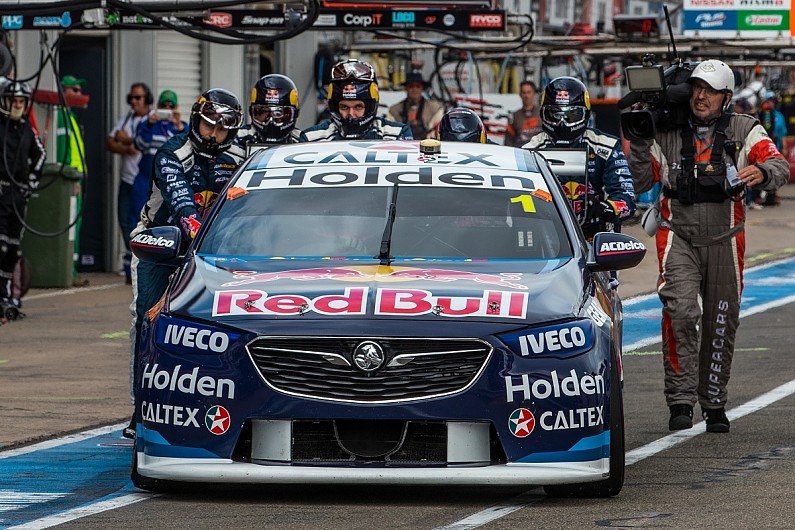 Supercars CEO Sean Seamer added that the decision wasn't the end of the road for turbo engines in Supercars.

"Our current rules allow manufacturers and teams to implement various configurations of power plants," he said.

"So, while the ZB won't have a turbo engine configuration at the moment, it's important that we, as a category, continue to build our learnings and expertise on forced induction."

"The V6 isn't dead, it's just been put on hold for the moment," Jones told Autosport.

"I think it's the right decision, to be honest. The ZB seems to be going along pretty well with the V8 engine, and the fans love the noise that the cars make.

"I think the V8 has the right sound, the competition is very, very close at the moment, so it's a sound business decision [to put the V6 on hold]. I think it's good for the sport."

Walkinshaw Andretti United made its anti-V6 position clear over the Australian Grand Prix weekend, when part-owner and McLaren Formula 1 boss Zak Brown labelled the decision to introduce the engine "a mistake".

WAU is very now much in favour of the backflip regarding the twin-turbo unit, and another of its co-owners, Ryan Walkinshaw, praised Holden for responding to feedback.

"The V8 engine is synonymous with this category, there is so much history and passion surrounding it, so it's fantastic to see Holden and the sport listening to the fans," he said.

"With a strong engine programme, it's great to be able to remove the uncertainty surrounding the future of the V8 and be able to continue to focus on the revival of our team as Walkinshaw Andretti United."