OPINION: We've not got long to wait now until lockdown restrictions are eased and national motorsport can resume, but there are still issues that clubs have to overcome. STEPHEN LICKORISH says matters won't be as simple as hitting 'go' again

“The fact that you can do something – this is true across so many other areas of life – doesn’t mean you should.” It may not be one of the more memorable quotes from a medical officer from one of the English government’s coronavirus briefings, but these words from Professor Chris Whitty carry a very important message. And they have become especially pertinent to the issue of the resumption of club motorsport.

The recent release of the government’s roadmap for emerging from lockdown in England contained the welcome news that grassroots outdoor sport can restart from 29 March. Governing body Motorsport UK swiftly followed with confirmation that it would begin issuing permits for non-elite events from that same date. But, as with so many things, the situation is not quite as clear as it first seems.

The uncertainty over when clubs should actually begin their season stems from the announcement that overnight stays will not be permitted, except for certain reasons, until at least 12 April. That means there will be a minimum of two weekends where English motorsport can take place when it’s doubtful that overnight stays are allowed.

Currently, you can spend a night away from home for work purposes and the provision of voluntary services – this would cover club racing team personnel that run cars on a professional basis, as well as paid and unpaid organisers and officials. But, to me – and others have interpreted the rules differently – competitors themselves are not clearly covered by those exemptions.

While some have taken a cavalier attitude, others are adamant that overnight stays relating to club motorsport should not take place. Historic Racing Drivers Club boss Julius Thurgood says: “It’s a really serious issue and we’ve got to exercise a little more patience. The guidelines are simple: you can’t travel and you can’t stay overnight. What is the urgency? We’re in March and we can say, if everybody behaves themselves, we will be out of it by the end of June. 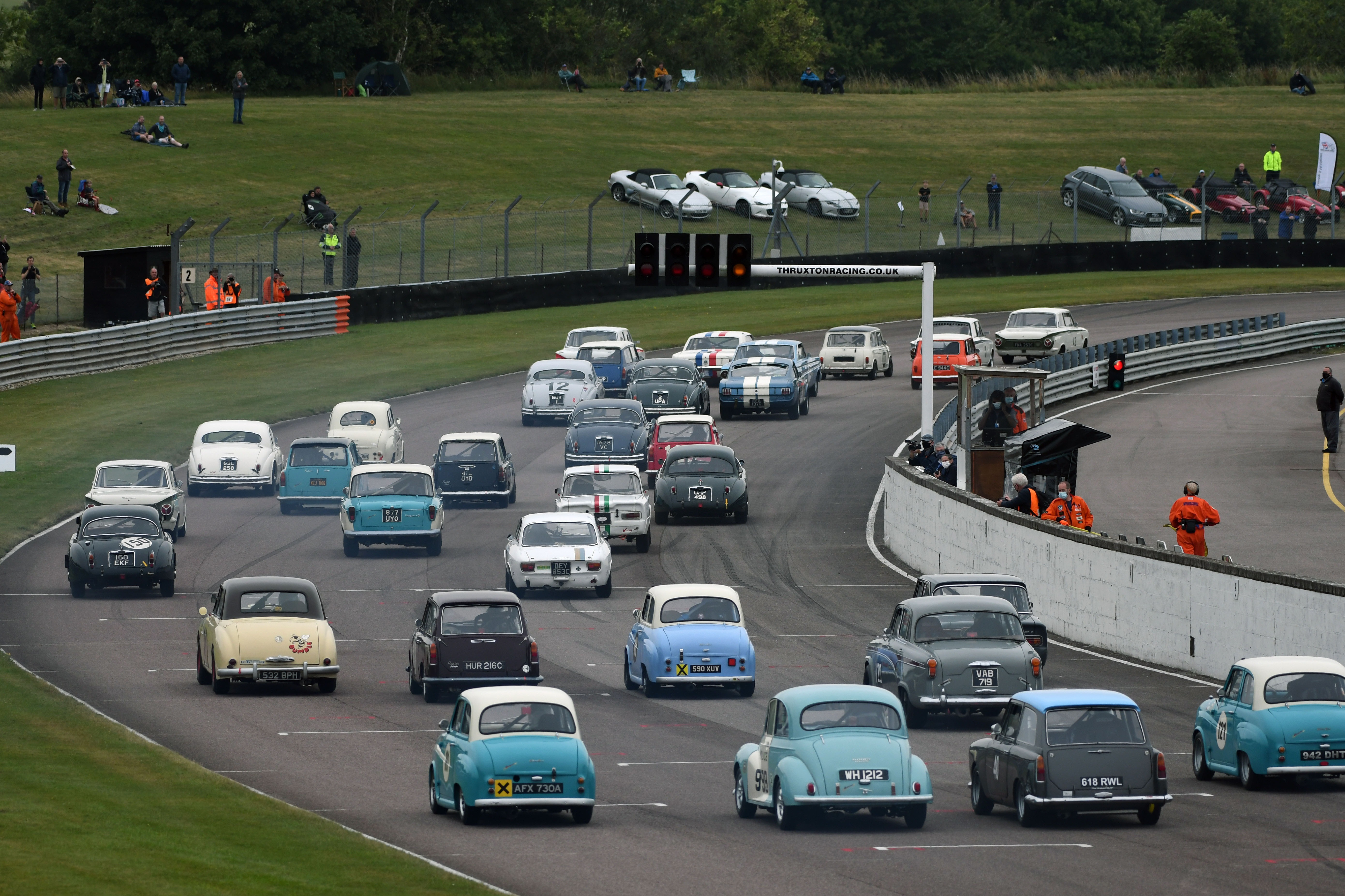 “We know people want to get back to motor racing, but we’ve got to understand – especially in historics – we have a cross-section of people. We have competitors who are over 70 and we have younger competitors in their twenties all from different walks of life – we’ve got people from Devon and West Yorkshire, from the Midlands and Norfolk.”

Thurgood feels it is irresponsible to bring such people together at this time, and the HRDC has elected not to have races at Castle Combe on 5 April. These will instead be held in August. And it isn’t alone in rescheduling events planned for early April.

"Running a race meeting as two single-day events would’ve met with the regulatory requirements, however the location of the two race meetings meant that the majority of competitors would be travelling reasonable distances to get there" Peter Daly, BRSCC

The British Automobile Racing Club has cancelled its event at Croft on 10 April, while the British Racing and Sports Car Club has postponed fixtures at Cadwell Park and Snetterton also due to run that weekend. BRSCC chairman Peter Daly says the club “weren’t comfortable” with organising race meetings under such conditions.

“We had consultations with the championships and we found their competitor feedback was not overwhelmingly positive and we had to make a decision that they weren’t viable race meetings,” says Daly.

“Running a race meeting as two single-day events would’ve met with the regulatory requirements, however the location of the two race meetings meant that the majority of competitors would be travelling reasonable distances to get there.

“One of our championships said to us ‘what would happen if a driver was going in a motorhome, driving from North London to Cadwell Park, what would go through the mind of a policeman who stopped them?’”

On that basis, the BRSCC “couldn’t justify” running the events, but Daly is keen to stress that they will instead be rearranged for later in the year.

“We’ve not taken money out of the motorsport industry by cancelling them, we’re rescheduling them,” he adds. “We, as the BRSCC, like the circuits and like the teams, cannot survive without race meetings.” 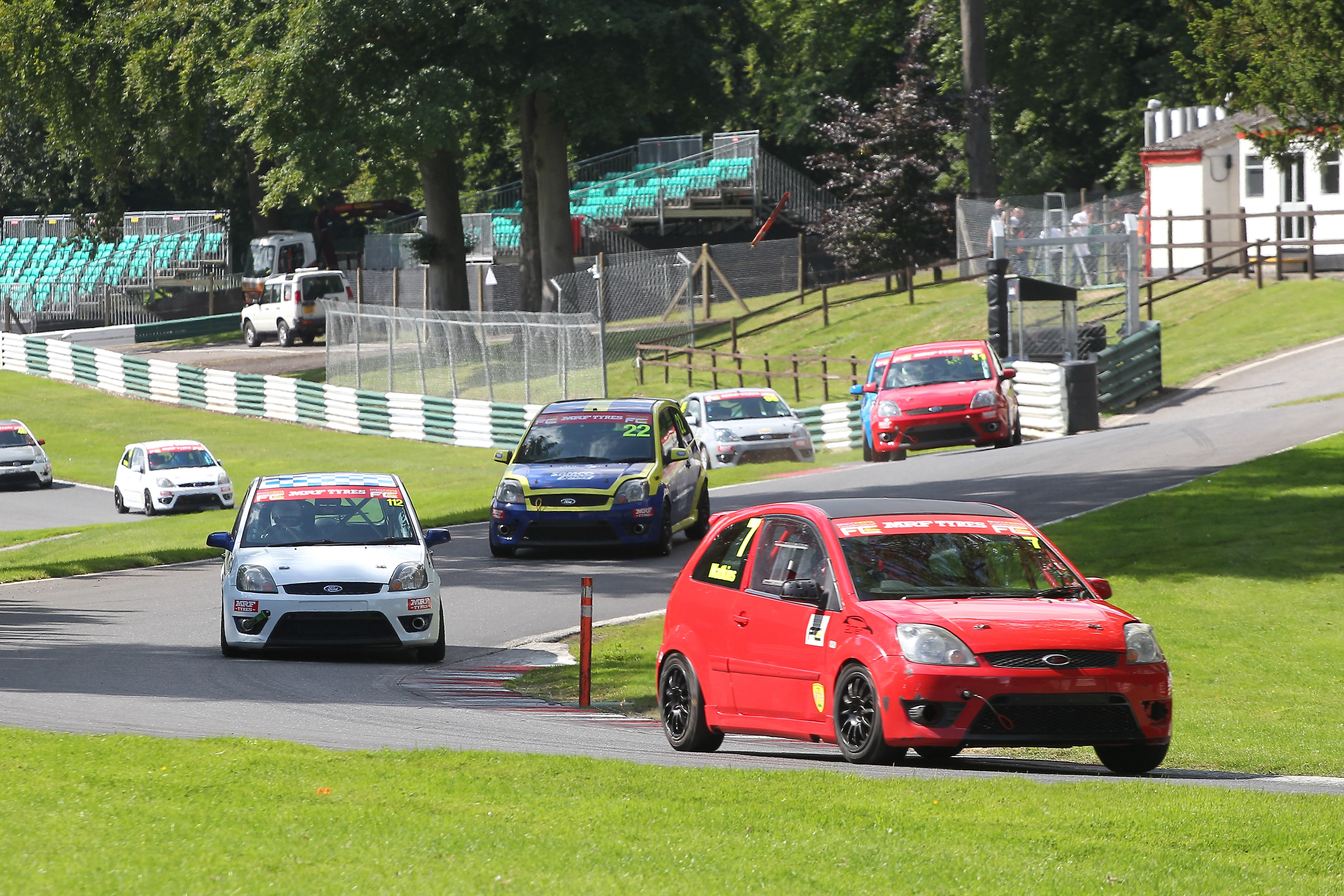 Given all of the uncertainty over the past week, you could argue that Motorsport UK should not grant permits until 12 April to avoid this issue of overnight stays. But that ignores the swathe of grassroots events organised by local car clubs.

Scores of autotests, trials, sprints and more can take place with a smaller number of competitors all local to the event where there is no need to stay away from home – and the same applies to the Castle Combe Racing Club. It is pressing on with plans for its Easter Monday meeting with a reduced timetable that allows a later start, and its competitors are generally in easy travelling distance to the circuit.

“We’ve got our own races and will have double-headers for them all and have an eight-race programme,” says CCRC chairman Ken Davies. “That will enable us to start at 0930 and, all being well, finish about 1630/1700. Most of our competitors are indigenous to the area, but those people with further to travel have got a shorter day to make it easier.”

Autosport understands that no two-day event permits will be issued over those first couple of April weekends in a bid to reduce the number of overnight stays. The new MG Car Club season opener at Brands Hatch (its schedule was originally due to begin at Silverstone in March) falls later in April but the club is already looking to organise the timetable so series only appear on one day, reducing the chance of transmission of the virus at the event.

“That’s the easiest way to limit the number of people in the paddock,” says club competitions secretary Mark Baulch. “We did that quite successfully at our first meeting at Donington Park last year and had a lot more space.”

Baulch also points out that the traditional early morning rituals of signing on and scrutineering, which could begin at 0730, are now completed online ahead of the event, meaning competitors do not need to arrive so early. This in turn, makes travelling to and from an event in the space of one day easier.

OPINION: The club racing initiative that should be dropped post-COVID

Let’s be clear, we’re not talking about a huge number of events over the course of those first two weekends of April. Prior to the roadmap announcement, just 10 circuit racing meetings were planned and that number has now shrunk further after the latest postponements. 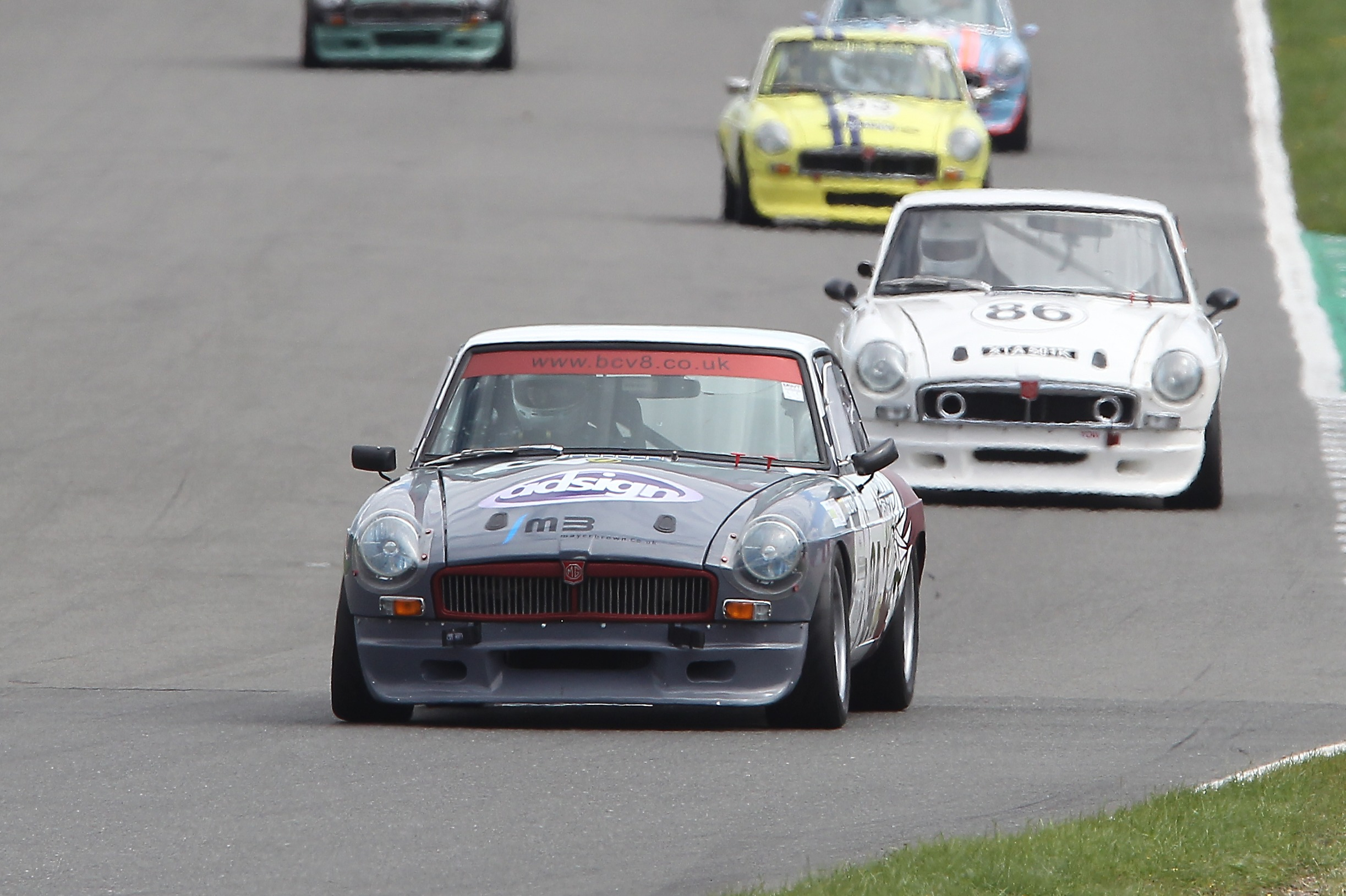 Some of the remaining ones are at central locations such as Donington Park and Silverstone, where it’s again easier for the majority of competitors to travel to without needing an overnight halt – but the same cannot be said for all of the events still due to go ahead.

If an outbreak of COVID-19 occurs that is directly related to competitors staying overnight at a circuit, then it could put motorsport in a very difficult position indeed

It’s clearly a very difficult decision for clubs to make over these early-April meetings. If they have been given the go-ahead to run events, and with many experiencing significant amounts of pent-up demand to go racing, it’s preferable to get the season under way.

But if one of these events goes ahead, competitors stay overnight at the track, and an outbreak of COVID-19 occurs that is directly related to this, then it could put motorsport in a very difficult position indeed. Perhaps, it’s therefore best to heed Prof Whitty’s advice and hold back – as the HRDC, BRSCC and BARC have indeed done.

We’ve all had to become very patient during this pandemic, and waiting a while longer for the season to start is a small sacrifice to make. 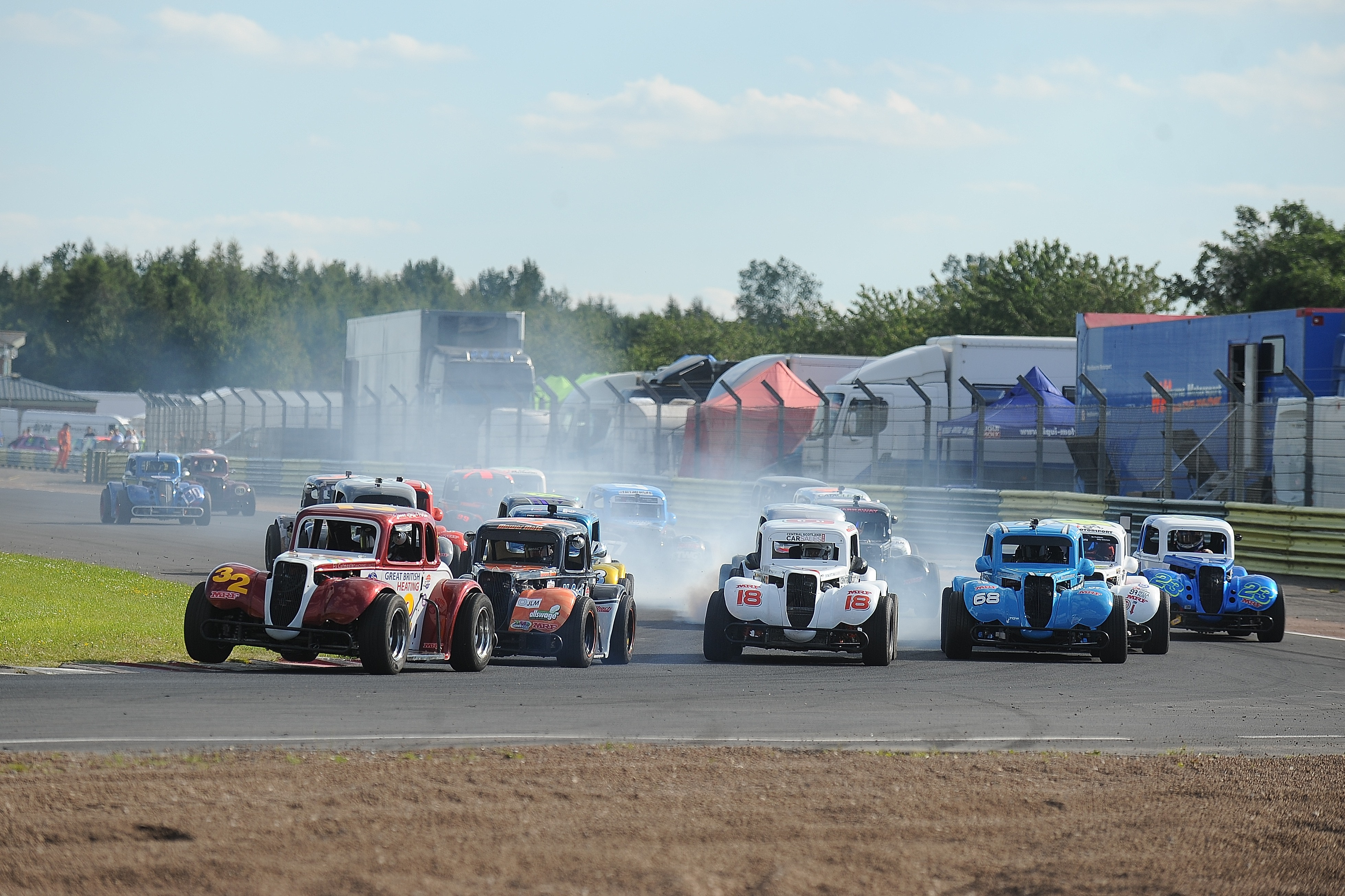