The 49-year-old 2005 Cup Series runner-up was making what has so far been billed as a one-off return to top-level racing with Kyle Busch's Truck team.

Biffle won the Truck title in 2000 and prior to Friday had last raced in the series in '04.

The Texas race was part of this year's Triple Truck Challenge, meaning Biffle could walk away with $500,000 if he stayed on for the next two races at Iowa and Gateway and won both.

But that would require Kyle Busch Motorsports to run a fifth truck for next weekend's race.

"A lot of things would have to fall into place," said Busch on the topic of running Biffle at Iowa and Gateway too.

"If we had an off-week before Iowa it would be a hell of a lot easier.

Asked if he thought he would be racing at Iowa, Biffle replied: "We will just have to wait and see what happens". 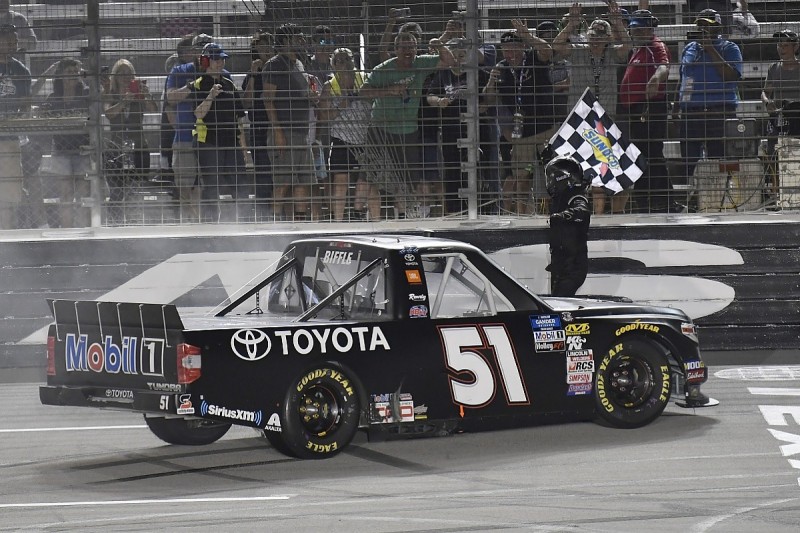 As well as his Truck title and 19 race wins in the Cup Series, Biffle also won the championship in the second tier Busch Series - now Xfinity branded - in 2002.

His Cup career ended when he parted with Roush Fenway Racing at the end of the 2016 season, and since then his main racing appearances have come in Stadium Super Trucks.

He briefly sampled the KBM Toyota truck at Las Vegas ahead of the series' previous Texas round at the end of March.

Busch has won on all five Truck Series appearances this year in the #51 machine that Biffle used for his victory, and Biffle said he was impressed with the team Busch had put together.

"These guys are a great group of guys that Kyle has assembled," said Biffle, who was a frontrunner throughout the race but sealed the victory by extending his fuel mileage in an event that featured a record 13 caution periods.

"The pitstops were phenomenal. Rudy [Fugle, crew chief] did a great job calling the race from the top of the box.

"It's not easy to win these, but I can see how Kyle has done very well."

Asked ahead of his return whether Texas would be a precursor to more race appearances, Biffle had replied: "I'll see how June goes. I could be talked into some more - maybe."