NASCAR has to "look outside the box" when drafting new calendar

NASCAR will have to "look outside the box" when it comes to rescheduling its 2020 calendar, believes Kevin Harvick

The 2020 NASCAR Cup season is on hold until at least May due to the ongoing coronavirus pandemic, with its recent races at Homstead and Atlanta ultimately scrapped after they were due to run behind closed doors.

The hiatus means seven Cup Series races, not to mention the Xfinity and Truck series that were also scheduled during that time.

NASCAR has said it plans to run all 36 scheduled races plus its all-star race, but there is no guarantee it will be able to resume with the 9 May race at Martinsville Speedway and any additional postponements would further clog the remaining calendar.

Many ideas have been floated to get all the events in, including mid-week races and more doubleheaders (Pocono is already planning a doubleheader 27-28 June).

What actually takes place at the race track could also change, in order to save time and expense, with a Saturday-only schedule mooted for the ultimately postponed Atlanta event.

"I think as soon as everyone got to Atlanta and saw the schedule change, it raised an eyebrow," said driver Clint Bowyer.

"You know we need to do whatever we can do to put on a show for all these fans across the country. 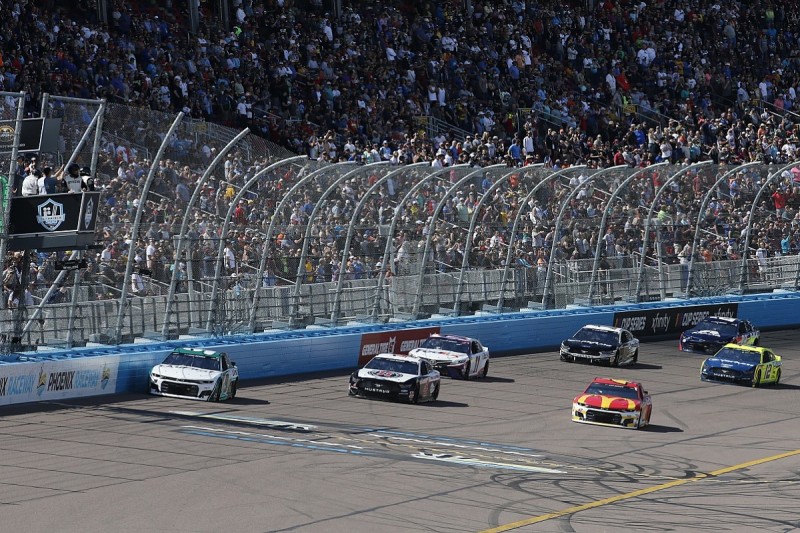 "If all we have time for is a one-day show, then so be it. I think we can provide enough bang for their buck."

Harvick, a longtime proponent to changing up the Cup series schedule, said repurposing the remainder of the schedule will require NASCAR "looking outside the box."

"Out of necessity, how we configure race weekends and when we race will have to be figured out for when we get back to racing this year," he said.

"It's actually not a bad thing.

"Change is different, but it can be good, and we'll have to think differently and be open-minded to what the rest of this year's schedule ends up looking like."

When asked what effect the reduction in practice could have on NASCAR weekends, Aric Almirola said: "Teams have a lot of data simulation to predict how their car is going drive and handle at a particular track, but it's not always perfect.

"Oftentimes, we show up to the race track, make changes, and make the car better from the time we unload until we get ready for the race.

"Practice is always helpful, even if it's just a little bit.

"It would present a challenge to not practice, but it would at least be the same for everybody."

﻿Get your NASCAR fix with Motorsport Games and the NASCAR Heat Esports series.

NASCAR's 2020 season resumption at Martinsville in May now in doubt