In a change from the traditional multi-segment format to qualifying for the curtain-raiser, each car on the 44-strong entry list was permitted to run a single timed lap on the oval to decide the order, with the session also being run at night for the first time.

Ricky Stenhouse Jr had set the early benchmark time of 44.477s for JTG Daugherty, before Bubba Wallace - driving for the new Michael Jordan-Denny Hamlin-owned 23XI Racing - shaved 0.003 seconds off Stenhouse's time to slot his Toyota Camry at the head of the timing sheets at the halfway mark.

Byron, who took pole in the last Hendrick front-row lockout in 2019, bettered Wallace's effort by just over a tenth-and-a-half to take top spot as the more established Cup runners began to filter out to set their times.

Bowman, now driving the #48 Chevrolet Camaro after Jimmie Johnson departed for IndyCar, was the 36th car to post a flying lap, with his effort being recorded as 47.056s at 191.261mph, some 0.256s quicker than Byron.

It is the fourth year in succession that Bowman will start on the front-row, and a record extending 14th and 30th pole in the event for Hendrick and Chevrolet respectively.

The two cars on the first row are the only ones assured of their starting position for the race, as the remaining 38 slots will be decided in the Duels, due to take place on Thursday evening Eastern Time.

Drivers who finished qualifying in odd-numbered positions will race in the first Duel - 60 laps (150 miles) on the oval, with their finishing positions in that event corresponding to how they will form up behind poleman Bowman on the odd side.

The likes of triple Daytona 500 winner Denny Hamlin, the returning Kyle Larson and 2018 Cup champion Joey Logano will compete in the first Duel. 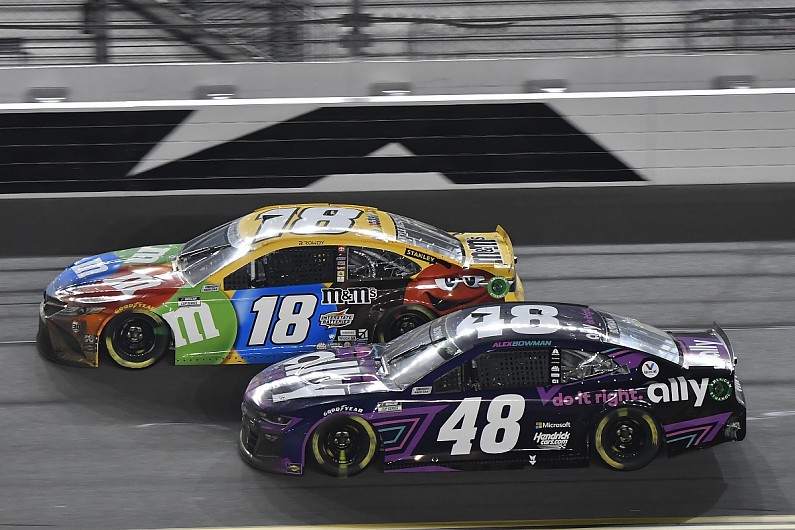 In the second Duel, identical in format, Wallace, who ended the day's earlier practice session fastest, will be joined by drivers including Kevin Harvick, reigning champion Chase Elliott, both Kurt and Kyle Busch and 2021 Cup rookies Chase Briscoe and Anthony Alfredo.

Daniel Suarez, the driver for the new Pitbull-backed Trackhouse Racing squad posted a respectable time, around half-a-second shy of Bowman in qualifying to finish 10th and booking himself a spot in the second of the Duels.

With 36 of the 40 allotted spaces on the starting grid allocated to charter teams, and 44 entries, eight drivers have to push for a way into the race, either through qualifying speed or by winning their respective Duel.

The fastest two 'open' cars, however, are guaranteed a spot in the 500, with David Ragan of Front Row Motorsports and JTG's Ryan Preece the drivers who claimed the available starting positions.

Preece was the last of the 'open' drivers to post a time, with Ragan already secure and Team Penske rookie Austin Cindric on the bubble.

Cindric's effort of 47.9s was bettered by nearly four-tenths by Preece, meaning the reigning Xfinity champion is not yet assured of making his Cup race debut.

Derrike Cope, the 1990 winner of the 500 was set to post his lap early in the session, but a battery problem with his chartered Rick Ware Racing machine left him unable to take to the track.

Because Cope is a chartered entry however, his participation in the race is not in doubt, with the 62-year-old set to race in Duel 2.

Noah Gragson's Beard Motorsports Chevrolet failed tech three times, before passing on the fourth, but was also unable to set a lap-time, meaning his best shot at making a 500 debut is to win his way in.