The race on the 1.5-mile oval near the city of Fort Worth was suspended on Sunday evening after 52 laps of 334 after rain and mist hit the circuit, ultimately causing a delay of over 72 hours, with conditions thwarting restart attempts on both Monday and Tuesday.

Once the race did resume, Clint Bowyer led the field to green, with Kevin Harvick taking an immediate opportunity to pit his Stewart-Haas Racing Ford Mustang for repairs following his wall strike in Sunday's 'race'.

Immediately after the race went green, Matt Kenseth drifted high in the #42 Chip Ganassi machine - tagging Denny Hamlin - before collecting the Richard Petty entry of Bubba Wallace, causing significant damage to both cars and ending the races of both Kenseth and Wallace within 15 minutes of the restart.

This incident on lap 60, and a further six-lap caution for debris on lap 76, allowed cars to pit for the final time in the segment, with Bowyer holding his lead throughout the restart.

The retiring SHR driver maintained his position to see out stage one in the lead, despite battling with Martin Truex Jr as the Joe Gibbs driver sought a way past in the dying embers of the 105-lap stage.

It was at this point that Busch started to be a factor in the race, the driver of the #18 JGR Toyota Camry starting stage two in sixth place, climbing to run in second behind team-mate Truex by lap 184.

On lap 199, Truex spluttered on the pit-straight, switching to the reverse tank in his Camry, but not before Busch had slipped into the lead, just as the green-flag stops started to be taken with a handful of laps to run in the stage.

By the time the cycle had shaken out, Busch maintained his lead over Truex, going on to scoop the stage win with Alex Bowman, Brad Keselowski and Ryan Blaney rounding out the top five. 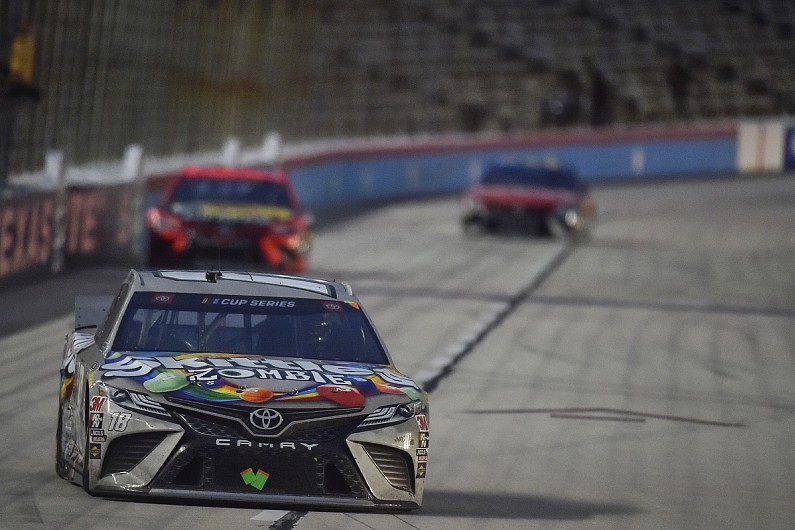 At the resulting stage break stops, Busch crucially did not opt to stop, as Truex led the charge to pit-road to top off the fuel tanks for the 124-lap final stage, with Bowyer following Busch's example in staying out.

Truex decided to wait until lap 275 to make his final stop, giving him a fuel offset of seven laps to the sister car, thus alleviating the fuel concerns that Busch and his crew chief Adam Stevens were facing.

The recovering Bowyer then eased past Busch for the lead, as Stevens told his driver to let the #14 go, as he would be around 20 laps short of fuel, and to use the draft of the Mustang to his advantage - all while trying to keep a sensible gap to the ever-closing Truex, who was also dragging along the 2021 JGR-bound driver Christopher Bell.

Busch regained the lead on lap 311 after Bowyer peeled away to the pits, with Truex and Bell now within 1.5 seconds of the #18, who was struggling to find a draft from backmarkers - who were getting out of the way too quickly for Busch's liking.

Help then came to Busch in the form of Harvick, who was being lapped by the leader, who gave Busch the precious draft that he was desperately seeking as Stevens continued to coach his driver corner-by-corner.

Truex closed to within 0.468s of his team-mate, but Busch had just enough in reverse to hold on to clinch his first win of a frustrating 2020 season, the 57th of his career and first since clinching the championship in the Homestead finale last November.

It ensures the two-time champion keeps his proud record of having won a Cup race every year he has competed full-time, something he extended to a 16th consecutive season.

However, because he was eliminated from the Playoffs after the Charlotte 'roval' race, Busch will not go forward to compete for the championship at Phoenix in two weeks' time.

Truex, who had been sent to the back of the field on Sunday following the discovery of an illegal rear-wing pre-race, secured second and went a long way to recovering some of the 20 points he was docked as a result, with Bell holding on to his maiden podium. 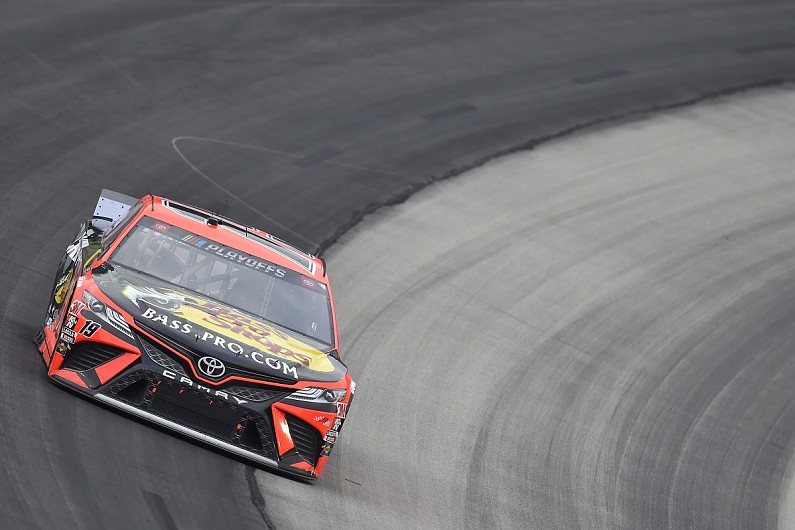 Ryan Blaney was the lead Ford Mustang finisher for Team Penske with fourth, as the Playoff standings tightened ahead of the final race of the semi-finals in Martinsville on Sunday.

Quiet afternoons for Harvick (a lapped 16th after that wall strike left the car of the winner of the previous three Texas Playoff races a handful to drive) and Hamlin (ninth) had the duo's number of points above the cutoff line slashed, with five drivers now within 17 points ahead of the must-win race on the Virginian short-track.

Fifth for Bowman meant the Hendrick driver closed to 25 points below the bubble as he seeks a maiden shot at a Cup title, with the man currently occupying the fourth and final transition spot, Keselowski, claiming sixth for Penske.

Chase Elliott's hopes of advancing were dashed when the Hendrick driver was required to pit the lap after a stop, reporting a vibration to his #9 crew. He rejoined a lap down and sat in the free pass position, waiting a caution that never came before taking a disappointing 20th.

Hamlin's ninth place gave him a 27-point cushion in the Playoff standings.

Joey Logano rounded out the top 10 positions, although Roger Penske's most recent Cup champion is already through to the Phoenix showdown to fight to add to his 2018 crown, courtesy of his win at Kansas last week.