The NASCAR Cup Series race at Texas has been postponed for a third time, after attempts to dry the circuit for a hoped restart were again scuppered.

The race, which is the second leg of the semi-final segment of the Playoffs, was originally suspended on Sunday afternoon after light rain and a heavy mist enveloped the 1.5-mile circuit, with the race being halted on Lap 52 of a scheduled 334 tours.

NASCAR originally hoped to resume the race on Monday at 10am local time, before abandoning those plans late on Monday afternoon in favour of a 4pm restart on Tuesday.

Hopes were raised that the race, the 34th of 36 on the calendar would be resumed at 8.30pm on Tuesday.

However, just as NASCAR and track officials were making good progress in drying the track, a light mist returned and it was deemed that NASCAR had 'lost the track' around 45 minutes prior to the planned resumption.

It is now hoped that a favourable weather forecast in the Fort Worth area for Wednesday afternoon will allow the race to be restarted at 3pm.

Provided the race does restart at that time, it would have been 71 hours since the red-flags were first shown.

It is understood, provided NASCAR can run the 501-mile encounter on Wednesday, there will be no adverse knock-on effect on Sunday's race at Martinsville Speedway - some 1,150 miles away from Texas Motor Speedway in the state of Virginia. 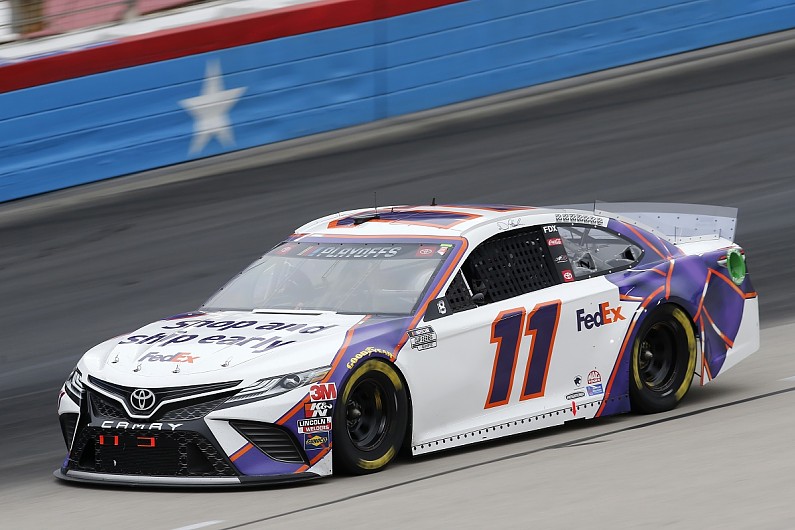 When the race does resume, the retiring Clint Bowyer will lead the field to green - the Stewart Haas Ford Mustang driver taking only fuel aboard during a round of pitstops behind the safety car just before the suspension of the race.

Jimmie Johnson, also in his final full-time year of Cup racing before a switch to IndyCar with Chip Ganassi for street and road courses in 2021, will restart second for Hendrick Motorsports, in turn ahead of Erik Jones (Joe Gibbs Racing).

Team Penske's Joey Logano - who is already locked into the championship race at Phoenix on 8 November and Jones's JGR team-mate Martin Truex Jr, who climbed from the rear of the field following the discovery of an illegal rear wing on his Toyota Camry just after pre-race tech by an official, round out the top five.

Regular season champion Kevin Harvick will resume in a lapped 36th place following contact with the wall in the slippy conditions on Lap 30, which left the SHR driver needing an extra stop for repairs.

Denny Hamlin will line-up in 15th place after sliding high through Turn 1 on the restart following the scheduled competition caution.

Of the other Playoff hopefuls still in contention to make it to Phoenix, Chase Elliott will restart in sixth place, Brad Keselowski is ninth, Kurt Busch is 14th, while taking four fresh Goodyear tyres at the stops under the safety car dropped race leader Alex Bowman to 18th in his Chevrolet Camaro.