Byron, who started the first 1.5-mile oval race of the 2021 season 31st in a field of 38 runners, quickly moved up through the pack to run consistently within the top 10 for the opening half of the 267-lapper.

The driver of the #24, whose only other Cup career win came at Daytona last season, took fourth in the first 80-lap segment, before a caution on the 153rd tour, seven laps prior to the end of the stage two handed him a chance to win the stage.

With the race going green at the end of Lap 159, it meant a single-lap shootout to decide the winner of the stage, with Joe Gibbs Racing pair of long-term leader Martin Truex Jr and Denny Hamlin battling for position.

Rounding Turn 4, Hamlin drifted high across the track, and halted Truex's progress, allowing Byron to nip through on the inside to take the stage win - his first of the campaign.

At the stage break, Truex was the only lead driver to pit for fresh tyres, the majority opting against as they had just taken fresh rubber under the caution, with Byron settling into a lead until Lap 200.

Contact between Ryan Blaney and Aric Almirola brought out the final caution of the race for debris, with Byron losing five spots on pitroad during the stops - something that was a feature throughout his race.

Upon the Lap 208 restart, Byron quickly passed those ahead and took back a lead he would ultimately not lose on the next tour, with team-mate Kyle Larson and Truex slotting in behind.

Over the remaining 60 laps, Byron controlled the gap to Larson at around the three-to-four second mark, although a combination of him easing off in the closing stages and a charging Tyler Reddick made the winning margin of 2.777s seem closer than in reality.

The win is Byron's first on an intermediate track and ensures that the #24 is locked into the end of season playoffs well before the cut-off. 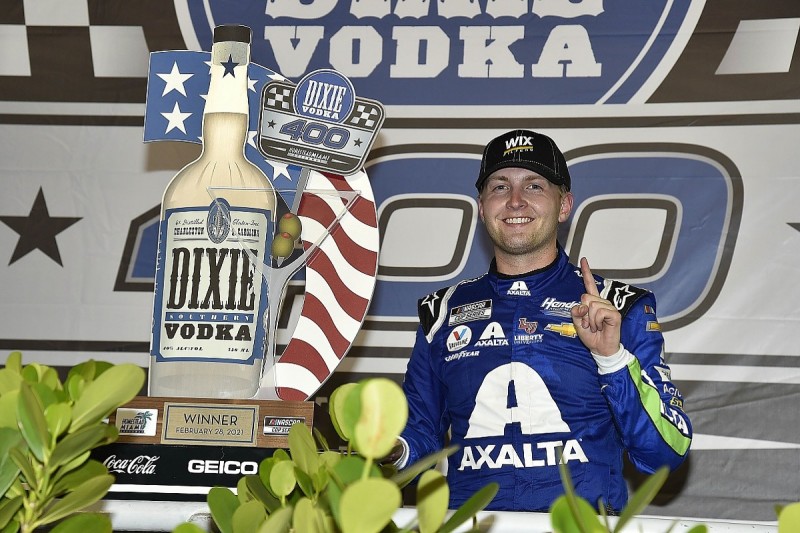 Reddick, driving for Richard Childress Racing, had a quiet first half of the race, languishing just outside the fringes of the top 10.

However, as the race transitioned into running at night, the #8 began to carve chunks of time out of the leader - including taking 18 seconds out of Byron in just eight laps.

Sticking to the high-line, Reddick, who won twice at Homestead in his Xfinity days, quickly closed up on the duelling Larson and Truex, the former doing a fine defensive job on the latter through traffic.

On Lap 263, Reddick lost momentum after checking up to avoid contact with Larson having already despatched Truex, although he quickly recovered to pass both drivers once again and take second place - the same result as he took in Saturday night's Xfinity race before he was disqualified from that event.

Truex pipped Larson for third - fourth being the latter's best result in Cup since finishing in the same position for Chip Ganassi Racing in his final race for the team at Phoenix last March before he was sacked.

Kevin Harvick came home in fifth as the highest Ford finisher on an otherwise subdued day for the Stewart-Haas driver.

Running as high as fourth with 20 laps to go, Harvick was caught and passed by Reddick but still banked good points to sit second in the drivers' standings behind Denny Hamlin.

Daytona 500 winner Michael McDowell secured a third straight top 10 result with sixth for Front Row Motorsports - the first time either driver or team have achieved such a run - as Ryan Newman secured his first top 10 since the fall Talladega race last season for Roush Fenway Racing. 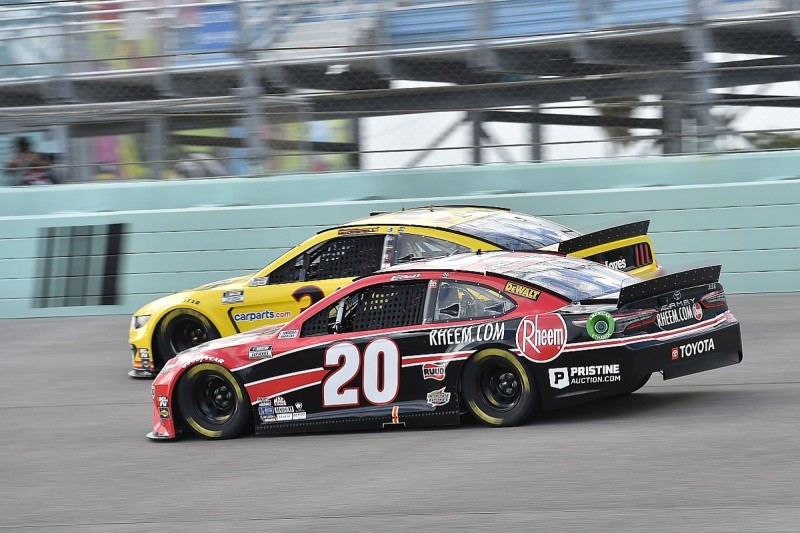 Kurt Busch continued his good start to the season for Ganassi but had to pit from fifth place midway through the final stage for a loose wheel which was causing vibrations. The #1 fell outside the top 20, but using fresh Goodyear rubber, Busch was able to carve his way back through the pack to salvage eighth place, just ahead of Byron's team-mate Alex Bowman.

Busch's brother Kyle had a mixed race on his way to squeaking into 10th by the flag.

Reigning series champion Chase Elliott looked strong on short runs in the #9 Hendrick, taking the lead on Lap 89 for a four-lap stint out front. However, he lacked long run pace, and fell away to 14th, one place ahead of Daniel Suarez who took a season-best 15th for the Pitbull-backed Trackhouse squad.

The trio of Penske drivers all endured miserable afternoons, despite looking pacey from the outset. Brad Keselowski and Joey Logano traded the lead in the early stages, but both gradually fell away over the remainder of the race.

They attempted a pitstop to split the final stage in half to try and rescue a decent result but Keselowski could only manage 16th with Logano 25th, and Blaney 29th after the contact with Almirola.

Chris Buescher was the surprise in the opening stage of the race, the #17 RFR driver expertly battling Keselowski for the lead of the race and leading 57 laps - second only to Byron's 102.

The Ford driver subsequently took the stage win and looked set to continue in stage two, before Truex undercut him for the lead, and he began to fall back as night set in, eventually claiming 19th.