Hendrick Motorsports' Chase Elliott overtook an ailing Kevin Harvick late on to claim his first victory of the season in the rescheduled NASCAR Cup Series second race at Charlotte.

After Tropical Storm Bertha had battered Charlotte on Wednesday which led to the initial postponement, Team Penske's Joey Logano emerged as the early front-runner when the 208-lap encounter got underway, albeit after a lap one caution and lap 20 competition caution.

After a frantic opening 30 laps, the race was suspended for over an hour due to thunderstorms in the vicinity of the 1.5-mile circuit. Logano's Ford Mustang machine was relatively untroubled thereafter as he eased to the stage one win.

The 60-lap stage two segment sparked into life with Joe Gibbs Racing's Kyle Busch picking up a puncture as he raced four-wide with Aric Almirola, Erik Jones and a charging Ricky Stenhouse Jr, as Stewart-Haas Racing's Kevin Harvick took the lead on lap 66, having re-started in third, up from 15th on the top 20-reversed grid.

However, a caution for a Quin Houff wall-strike on lap 73 led to a divergence in strategy, as Harvick dived for the pits for four fresh Goodyear tyres, while the majority of the front-runners, including Hendrick's Alex Bowman opted to stay out.

Bowman inherited the lead and began to drive away from the pack, forming a breakaway with Penske duo Logano and Ryan Blaney.

Bowman converted his lead to the comfortable second stage win, the fourth time in six races he has won a segment, and re-started the final 93-lap block in the lead thanks to quick work from his pit-crew. 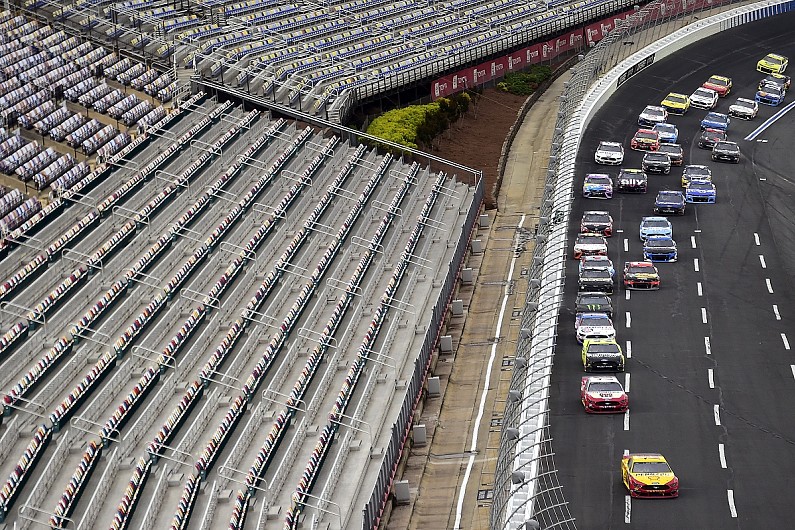 However, soon after the restart, Harvick eased passed the #88 Chevrolet Camaro on lap 126, with Bowman slotting in behind the Mustang until he lost the rear end 10 laps later, and slapped the wall, causing bodywork damage to the rear of his car.

Harvick went about his business in the lead uninterrupted until the seventh caution of the day for a Timmy Hill spin on lap 144 closed the pack back together.

After these final pitstops, Harvick again eased away from the pack, until he began to slow around lap 170, reporting a loss of grip on his car, with the chasing Elliott eating into his lead.

Through backmarker traffic on lap 181, Elliott, who won the Truck Series race earlier in the week, made the move that would ultimately seal him his first win of the season, seventh of his Cup career, and make up for the disappointment of losing victory in the closing laps of the last two races at Darlington and on Sunday in the 600-mile Charlotte race.

Despite having been nowhere in the opening two stages, Joe Gibbs Racing's Denny Hamlin stormed back to take second, his Toyota Camry passing the Mustang of Blaney on the final lap to snare a third top five finish since the championship returned following its COVID-19-endured hiatus.

Stenhouse, from 23rd on the 40-car grid drove brilliantly throughout the race to snare a fourth-place finish, his best result since third at Las Vegas.

His JTG Daugherty Camaro was up to sixth soon after the restart, and although he fell to as low as 12th mid-way through stage two, quickly began to carve through the field in the final segment. 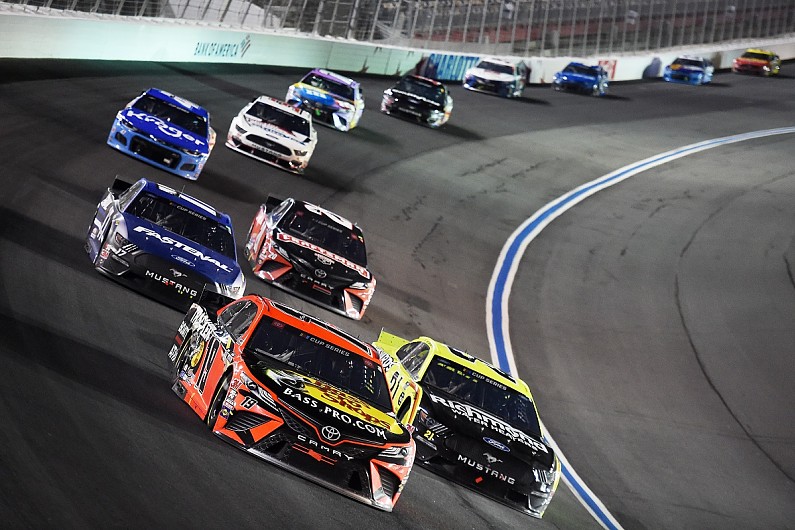 The #47 ran as high as third, before Hamlin charged past to demote Stenhouse, but he still comfortably held off another classy drive from Kurt Busch for Chip Ganassi Racing.

Logano was sixth ahead of Penske team-mate, Brad Keselowski, who won the 600-mile race on Sunday, with Austin Dillon a deserved eighth, having run inside the top 10 for the majority of the day for Richard Childress Racing.

Martin Truex Jr was an anonymous ninth for JGR, describing his car as "junk" as he struggled on the 1.5-mile circuit, one at which he is renowned for delivering big results.

Harvick fell to 10th, just pipping Jimmie Johnson by a tenth, with pole-sitter William Byron 12th, whose race never recovered after contact in the pit-lane early on with Cory LaJoie.

Matt Kenseth spun his way to a lapped 23rd for Ganassi in his fourth race back in the Cup Series, whilst Kyle Busch's puncture left him unable to do any better than 29th, with Bowman only able to salvage a 31st place finish.