Keselowski led 446 laps out of 500 and won all three stages on his way to his second victory of the year.

The Penske Ford driver took the lead from team-mate Joey Logano on the sixth lap of the race after bumping past the reigning champion.

The only real challenger to Keselowski over the following 494 laps was Chase Elliott.

The Hendrick Motorsports driver was the only one to pass Keselowski on track and led a total 49 laps, but a caution on lap 371 handed the lead back to Keselowski in the pits.

Keselowski never relented once in front. Elliott closed in, but could not find a way past as the race entered its closing stages.

Despite his recent dominance in NASCAR, Kyle Busch was largely anonymous for the first part of the race.

But Busch rallied back to be a part of the lead battle towards the end and was on Elliott's tail for in and around the final 80 laps, but could not find a way past.

At the finish, Keselowski, Elliott and Busch were covered by less than a second. Behind the top three was Ryan Blaney who took his third consecutive top five finish.

The Penske driver started from 17th but quickly worked his way forward. He did not lead any laps, unlike his Penske team-mates, but for much of the race had what appeared to be one of the strongest cars in the field. 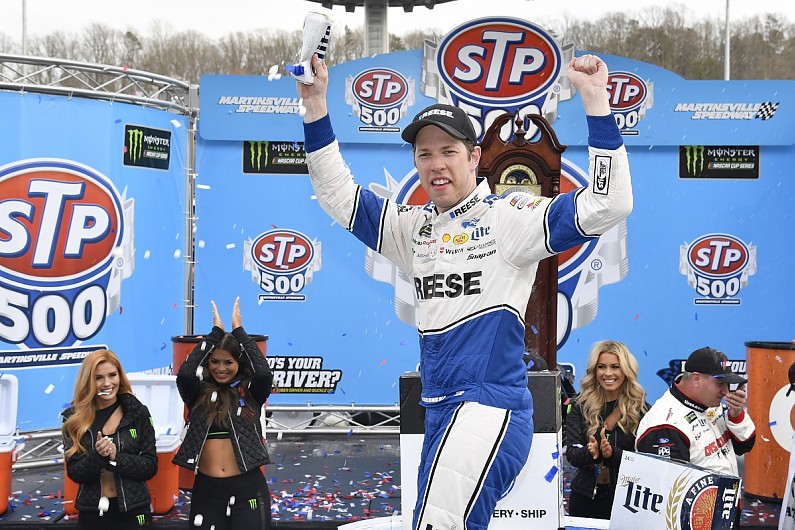 Blaney beat Denny Hamlin, who had to fight back from an uncontrolled tyre violation penalty that he earned after a pitstop he completed at the beginning of the final stage.

Kevin Harvick and Clint Bowyer were sixth and seventh, the latter having to recover from two pit lane speeding penalties.

Although a strong 12th behind Austin Dillon, Kurt Busch had his worst finish since the season-opening Daytona 500.

There were no retirements from the race, although there were five caution periods outside of the stage-ending yellows.

The stand out stoppage was the second which came on lap 146 after Ross Chastain lost an axle.

After pitting for repairs he was able to rejoin the race and was classified 34th out of 36, having only completed 365 laps.