The Toyota driver was one of three Joe Gibbs Racing entrants competing for the championship alongside Martin Truex Jr and Denny Hamlin, as well as Stewart-Haas' Kevin Harvick.

He held off a charging Truex, who dominated the early part of the race - winning the first stage and leading a total of 103 of the 267 laps, but who ultimately had to settle for second place in both the race and the championship for the second-straight year.

Truex's hopes of a second title in three years were blighted on lap 121 when, following a green flag pitstop, he was called back to the pits because his front tyres were put on the wrong sides of the car.

After dropping a lap down, a caution for a spinning John Hunter Nemecheck on lap 136 allowed Truex to get back on the lead lap.

He returned to the top five before the end of the second stage and remained firmly in the top-three for the final part of the race.

Finishing third in the race behind Busch and Truex was Erik Jones, the only Joe Gibbs Racing driver not in title contention. He beat Harvick who, despite leading 41 laps, dropped out of contention when he made his final green flag pit stop much later than his rivals in the hope of capitalising on a caution that never came.

Outgoing champion Joey Logano rounded out the top five, ahead of Clint Bowyer, Ryan Newman, Austin Dillon, and Alex Bowman, while Hamlin missed out on a maiden championship by finishing 10th. 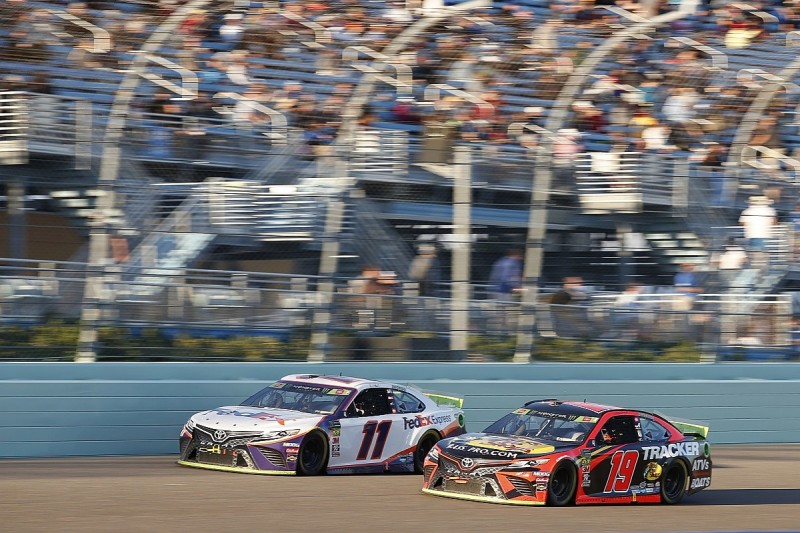 As the sun set in Miami Hamlin came to the fore, Hamlin was challenging Busch up front but a mishap during his final pitstop, where too much tape was put on his car's grille, caused overheating issues.

Following a pitstop to rectify the problem, Hamlin dropped off the lead lap but was able to rally back - passing nine cars in the closing stages of the race.

Kyle Larson was the only non-championship four driver to contend for the win, but engine issues brought an early end to his day on lap 208. The similarly-powered Chevrolet of William Byron also retired on lap 218 after losing oil pressure.

Busch's win for Toyota means that NASCAR's three national touring titles this year have been won by each of the category's three manufacturers for the second straight year, with a winless Matt Crafton claiming his third Truck series title for Ford on Friday, and Tyler Reddick clinching his second-straight Xfinity crown for Chevrolet on Saturday.

Busch's triumph is also the first time since Truex's 2017 title that the regular season champion has gone on to clinch full season honours.