A furious Elliott drove into fellow playoff contender Hamlin on the slowing-down lap and then remonstrated with him in the pitlane after Joe Gibbs Toyota driver Hamlin had spun Elliott's Hendrick Chevrolet out of the race lead with two of the scheduled 500 laps to go on Sunday night.

"He said I wrecked him and obviously [blind singer] Ray Charles saw that," Hamlin said.

"It wasn't intentional, I just wanted to move him out of the way.

"I tried to get to his back bumper and slide him up the track and I just went too deep.

"We can play favourites if we want but unfortunately there is a ticket to Homestead [for the championship showdown] at stake."

The pair are now at the foot of the playoff standings with two races to go before the current eight-strong pack is reduced to four for the Homestead decider.

The race went into overtime as a result of their clash, and the extra laps began with winner Kyle Busch elbowing team-mate Hamlin aside and ended with Hamlin in the centre of a multi-car pile-up at the finish line.

Fifth-place finisher Kevin Harvick, who was caught up in that incident, dismissed the Martinsville crashes, saying: "It's championship time. It's time to get physical".

But Harvick sought out fellow championship contender Ryan Blaney post-race to discuss a battle they had.

"He didn't like getting hit and I didn't like the cheap shots, the brake checks and the hitting down the straightaway," Harvick said of their conversation.

"I said, 'If you want to race hard and you want to run into me after I pass you, that's fine, but slamming me down the straightaway and brake-checking me is another thing.'"

Blaney was not impressed with the "chaos" at the end of the race.
"The last handful of restarts were just pandemonium," he said after being classified eighth. 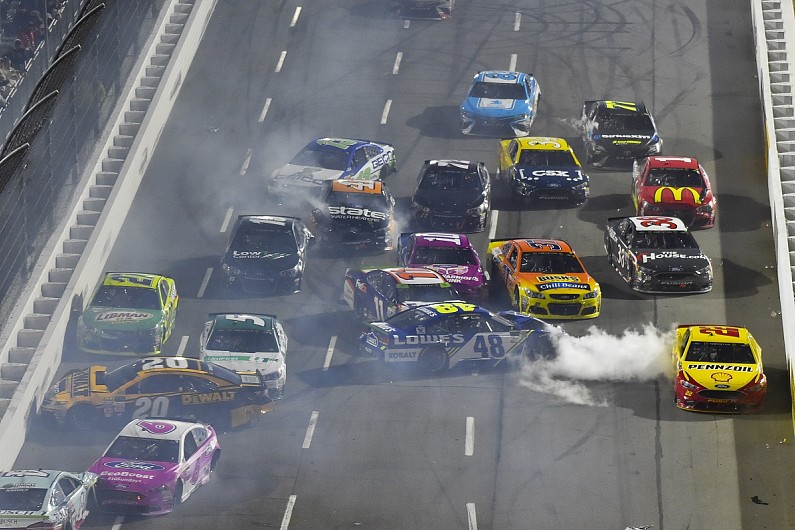 "It was pretty ridiculous with everyone wrecking each other and running into each other."
Championship leader Martin Truex Jr came second, and said he backed out of a possibility to hit Busch on the final lap.

"I try to race a certain way, and that's how I raced tonight," Truex said.

"There was a hole there, I got in it and thought I had a shot at beating him fair and square. Just couldn't get the power down off [Turn] 4.

"It never crossed my mind to knock him out of the way. Seemed like a lot of guys made enemies tonight and we didn't.

"With three races to go, I don't really think I want any enemies."