On an entertaining first lap that featured myriad position changes, polesitter Joey Mawson looked assured as he moved over to defend and consolidate first into Turn 2.

Points leader Hubert initially lost a spot to ART Grand Prix team-mate Mazepin - who had beaten him to second in the feature race the previous day - but retook the spot on the first lap.

While attacking Simo Laaksonen on lap two for fourth, Hubert touched the rear of the Campos driver's car and spun him around. That left Hubert vulnerable to Mazepin, who then passed with DRS at Turn 2 on lap three of 15.

But the title battle - with only one round remaining at Abu Dhabi - came to a head with three laps to go as Hubert applied intense pressure to Mazepin in the closing stages.

Hubert got a run with DRS into Turn 13 and looked set to attempt a move before Mazepin locked up and ran wide.

The drama was not over though, as Mazepin failed to slow his car down appropriately and crashed into the wall at the exit of Turn 13, bringing out a virtual safety car.

Although Beckmann had closed to within half a second of Mawson earlier on, he could not find a way through and it looked like Mawson had sealed his first GP3 victory before the Mazepin-induced VSC.

Mawson - despite racing for Arden, which has struggled for most of the year - has made a reputation for his stoic defence, and looked set for a deserved victory.

But the VSC did not work in his favour and Beckmann was all over his rear in the last-lap shootout, making a move for the win on the brakes at Turn 13. 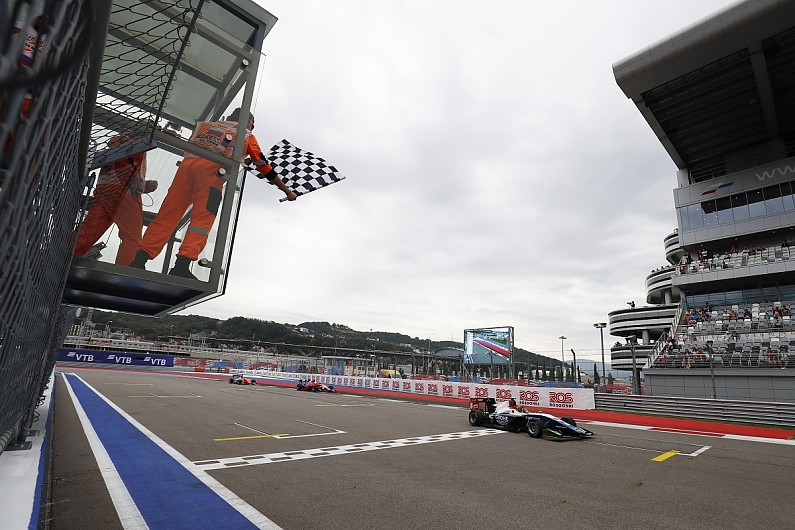 Richard Verschoor, the 17-year-old making his sixth GP3 start, has shown rapid pace since graduating from the Formula Renault Eurocup to the MP Motorsport team and took a first podium, ahead of Hubert and Jenzer's Juan Manuel Correa.

Arden had two cars in the top six thanks to a strong showing from Gabriel Aubry, ahead of Tatiana Calderon (Jenzer).

Saturday's feature race winner Leonardo Pulcini fell back at the start and had to work hard to regain his starting spot of eighth, while Ryan Tveter - from 18th on the grid - took ninth ahead of Jannes Fittje, who recorded his best ever GP3 result.

Callum Ilott, who started the weekend second behind Hubert in the points, had another nightmare race having dropped through the order to 13th the previous day. He visited the pits for an issue before finishing 18th, a lap down, and is mathematically out of the title fight.