What landmark will Magny-Cours commemorate this year? Why do Renault's chances look better in France? Which milestone was set in Magny-Cours 13 years ago, and what happened 23 years ago this week? Marcel Schot brings the answers and more anecdotes on the ninth round of the season

The main force to reckon with this weekend will be the home force: Renault. For the home Grand Prix they always find a bit of extra power. While their four wins and nine podiums look a bit bleak against Ferrari's 14 and 41, the percentages tell a different story. Renault has only 21 participations in France over the years! That's four wins in eleven races for 36% and nine podiums in 21 attempts for 43%. Ferrari's 41 podiums in 135 attempts give them 30% and the 14 wins in 53 races 26%.

The 1992 French Grand Prix was the race in which Martin Brundle scored the first of his nine podium finishes. Having spent six years with teams usually found on the lower half of the grid, as well as a year on the sidelines, 1992 proved to be the Briton's year. He signed for Benetton, where he partnered young talent Michael Schumacher. The start of the season was difficult for Brundle, with four consecutive retirements and a teammate that was structurally faster than him. Luck seemed to change in Canada, where the Benetton driver was second halfway through the race, but once again his car broke down. With five points and a seventh place in the Championship, Brundle came back to Europe for the French Grand Prix.

On Friday it was business as usual. Nigel Mansell fastest, his Williams teammate Riccardo Patrese quite a distance behind and the rest of the field a huge distance behind. Only McLaren drivers Ayrton Senna and Gerhard Berger, as well as Michael Schumacher kept the gap below two seconds. Behind them Ligier pilot Erik Comas was 0.001 seconds faster than Brundle, who had to settle for a rather familiar sixth place. Behind him both Ferraris, good friend Johnny Herbert (Lotus) and the second Ligier of Thierry Boutsen were all less than half a second back and thus within striking distance.

For the final qualifying session the track was much faster with laptimes between 1.5 and 2 seconds quicker. Unfortunately for Benetton the day was a bit worse than Friday, with Schumacher ending up fifth behind two Williams and two McLarens and Brundle seventh with Ferrari driver Jean Alesi between them.

Dark clouds gathered over the track on race day. However, even with imminent rain, it wasn't possible to official name it a wet race and thus the field got underway on slicks. Patrese immediately grabbed the lead ahead of Mansell, with Senna and Schumacher fighting behind them. When the pair entered the Adelaide hairpin, Schumacher dove inside, but found Senna unwilling to make way. The end result was a pitstop for Schumacher and a retirement for Senna. This, of course, left Martin Brundle as the main hope for a good result at Benetton. The Briton had started better than Alesi and with both Schumacher and Senna disappearing ahead of him, found himself in fourth place.

The situation remained unchanged until Gerhard Berger retired on the eleventh lap. This left Brundle third, ten seconds behind the Williams, who were having their own private battle at the front. With Jean Alesi three seconds behind, followed by Lotus driver Mika Hakkinen, there was no immediate threat for Brundle. However, the tranquil situation didn't last long. After 17 laps the forecasted rain finally started to fall, but nobody pitted for wets as everyone was convinced the race will be stopped any second. Three laps later the race was indeed red-flagged and only restarted when the track was dry again.

During the intermission Riccardo Patrese, still leading, got the order to let Mansell ahead, which he promptly did with such a clear move on the start finish straight that it was obvious to everyone. For Brundle it didn't matter who won ahead of him. His lead over Jean Alesi was growing steadily, leaving the Benetton driver to wonder what bad luck would befall him this time. After 44 laps things changed again as rain started to fall once more. Most drivers pitted between lap 49 and 51, with Brundle among the first to go in, leaving third place for Alesi, who decided to keep going on slicks. While the Frenchman's attempt was brave, it soon proved to have been the wrong choice. On lap 56 he finally went in, handing third place back to Brundle.

This time nothing went wrong and when the chequered flag was waved twenty minutes later, Martin Brundle was happy to climb the podium for the first time in his Formula One career.

This week in 1982 saw the the Dutch Grand Prix taking place. While John Watson (McLaren) was leading the championship with a comfortable lead of ten points, the four-way battle behind him was in full swing. Ferrari's Didier Pironi was leading the group, but had Brabham driver Riccardo Patrese, Renault's Alain Prost and Keke Rosberg in the Williams within three points. The field was so equal that only Prost and Watson had managed to win two rounds. For Prost they were the first two rounds of the season, after which the Frenchman hadn't finished a race. 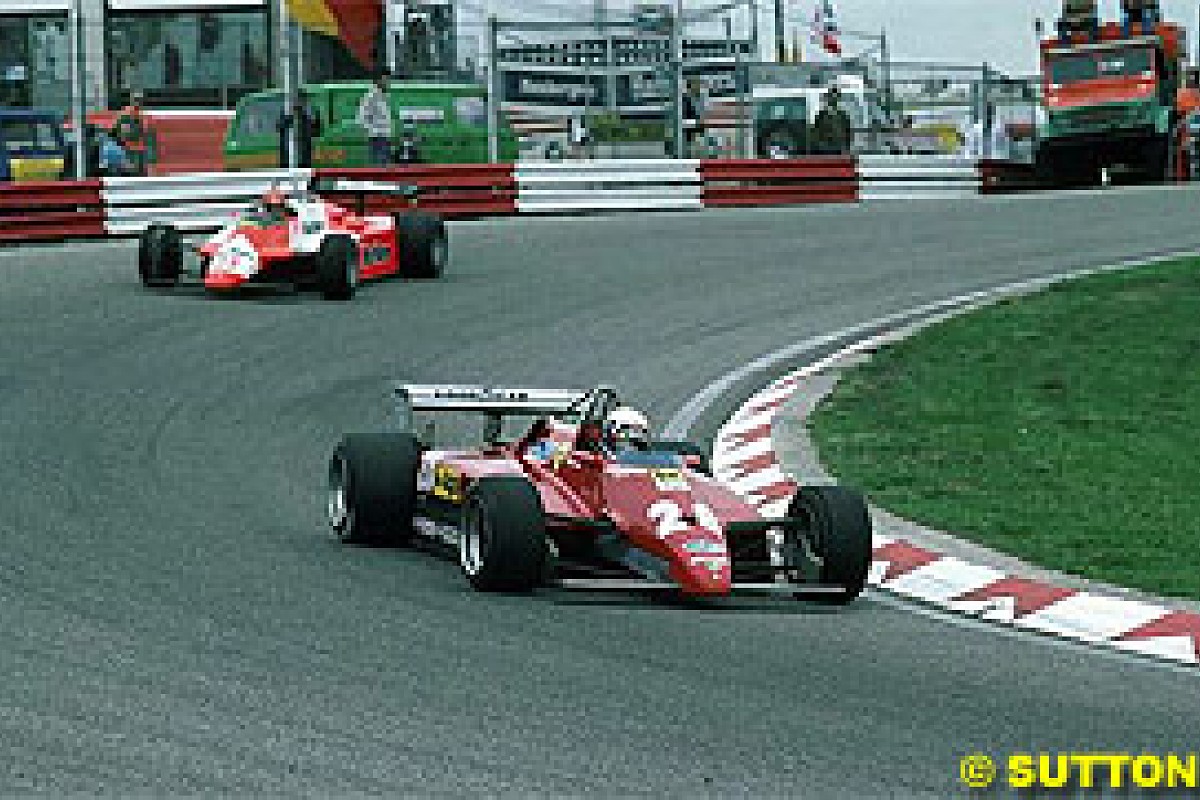 The first thing that attracted attention at Zandvoort was that after two months Ferrari had contracted a replacement for Gilles Villeneuve, who had been killed at Zolder. After four seasons with Surtees, Theodore, McLaren and Ligier, Frenchman Patrick Tambay made the move to Ferrari.

In the first qualifying session on Thursday Arnoux was clearly the fastest. The Renault driver clocked a 1:14.2, four tenths quicker than number two and teammate Alain Prost. Behind them only Nelson Piquet in the Brabham was close, within a tenth of Prost. Pironi was the quickest of the rest of the field, but the Ferrari was no less than 1.5 seconds behind provisional pole. Tambay performed admirably with the sixth fastest time.

On Friday the times were significantly slower and thus nothing changed. Two Renaults on the front row, Piquet and then the Ferraris split by McLaren driver Niki Lauda, who was by and large the fastest non-turbo driver.

At the start of the race, Prost grabbed the lead from Arnoux, while Piquet behind them made a mess of his start. The Brabham driver dropped from third to sixth. As happened before, the qualifying domination of Renault didn't last long into the race. After two laps Pironi ran between the yellow duo and after five the Ferrari driver passed the start/finish line in the lead. Behind them Piquet immediately fought back to reclaim third.

The first excitement in the race came when Derek Warwick's rear wing broke off after 15 laps, two laps after the Toleman driver set what in the end became the fastest lap of the race. Five laps later it was Rene Arnoux who went off. The Frenchman suffered a suspension failure at the end of the start finish straight, the fastest point of the track and ploughed into the barriers at the very back of the gravel in the Tarzan corner. As the car ended up with its nose high in the air, its driver immobile, the crowd held their breath. It took a poke from Doctor Sid Watkins to make Arnoux realise everyone was looking upon him in fear. He had merely been enjoy the view of the clear blue sky!

Meanwhile Pironi had struck a gap of 13 seconds to Prost and Piquet and with Arnoux out, Keke Rosberg in the Williams was the closest follower, some 16 seconds behind the duo. Behind the Finn there was an intense battle going between veteran Niki Lauda and Ferrari's new driver Patrick Tambay.

Shortly before the halfway point the end of the race was there for Prost, who suffered his seventh consecutive retirement. With that, only the fight between Lauda and Tambay remained. After having tried for 37 laps, Lauda finally succeeded in overcoming Tambay's turbo advantage. Unfortunately for Lauda, Tambay has held him up too long. The gap to number three Rosberg was already 14 seconds, and the gap to the leader almost a minute. 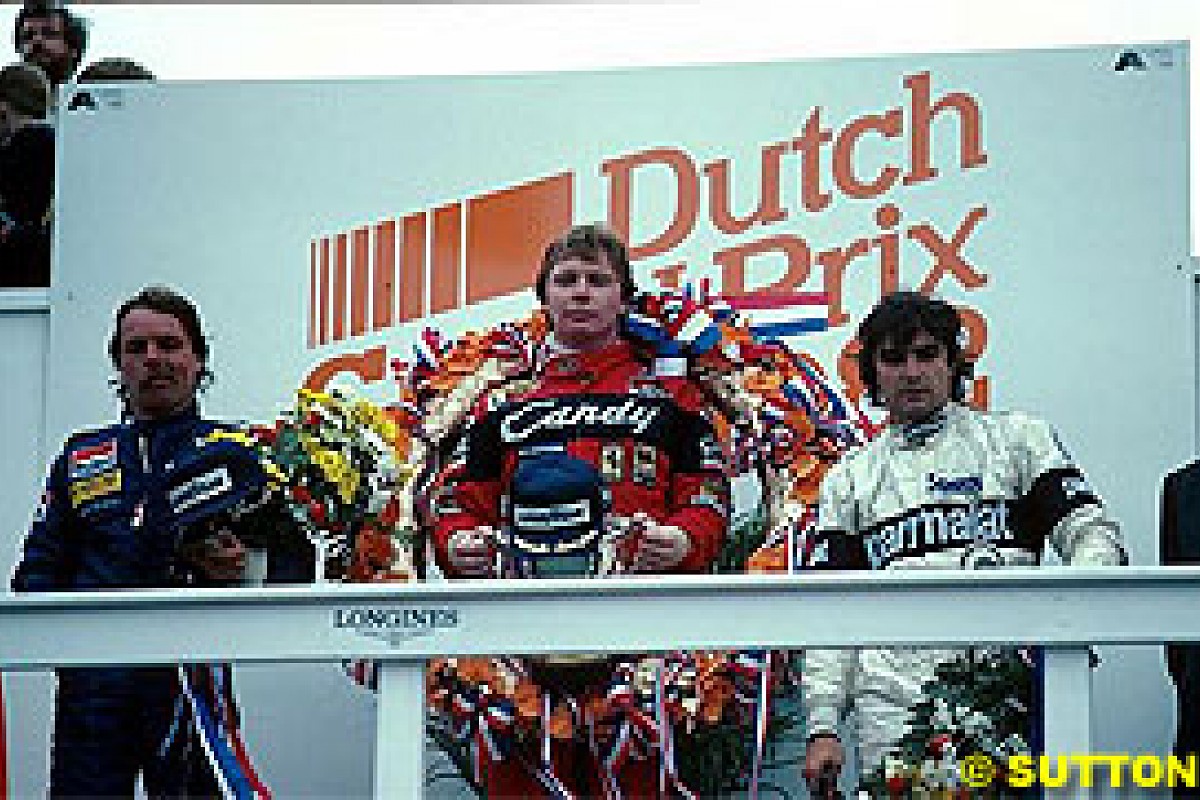 For Tambay his first race of the year ended without points. Soon after Lauda's move, the Ferrari engine started misfiring and in rapid succession Williams driver Derek Daly and Tyrrell's Michele Alboreto also made their way past the Frenchman. With the gaps relatively big, the second half of the race was a serene parade of circling cars. Piquet briefly tried to close the gap to Pironi, but soon realised that five seconds in ten laps wasn't going to bring him victory.

Behind Piquet, Rosberg tried hard to catch up, but in the end the race proved slightly too short as the Finn finished seven tenths behind the Brabham driver. In the end Pironi scored his final victory, ahead of Piquet and Rosberg.