He was then relegated to second by Marquez, who had high-sided at the fast Becketts left-hander early in the session before returning to the track after a bike change.

Crutchlow improved to a 2m00.897s with four minutes remaining and that was good enough to be fastest by 0.241s from Yamaha's Valentino Rossi, who posted his time in the final minute to relegate Vinales to third.

Aleix Espargaro also improved to fourth late on ahead of Marquez, who dropped his Honda at the entry to the Village right-hander in the closing stages. 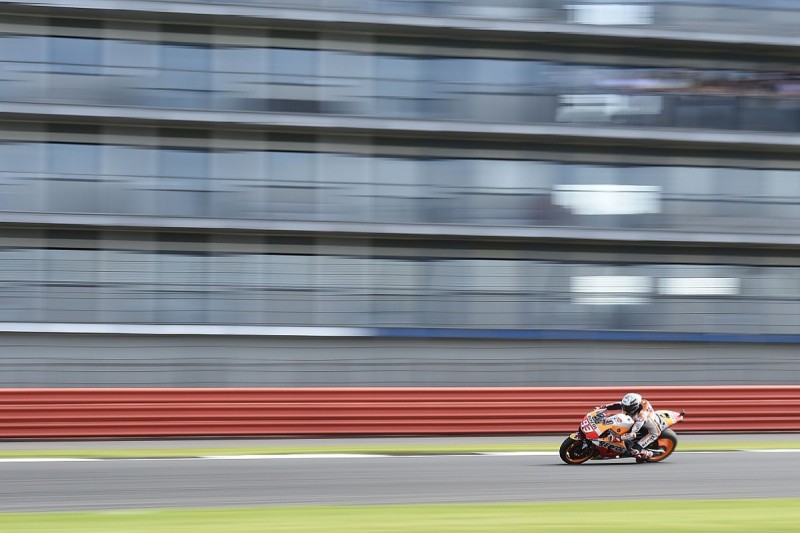 Marquez was able to restart and recover to the pits, but had to settle for fifth fastest ahead of Jorge Lorenzo.

Ducati rider Lorenzo stopped at Luffield after the end of the session and was pushed back to the pits by Bradley Smith's KTM.

Pol Espargaro and Johann Zarco both had brief stints in third place before a late flurry of improvements and ended up seventh and eighth.

Andrea Dovizioso ended up ninth for Ducati ahead of Pramac's Scott Redding.

Suzuki pairing Andrea Iannone and Alex Rins rarely troubled the upper echelons of the timing screens and ended up 11th and 12th respectively.

At the end of the session, riders participated in a test of a proposed new bike change procedure for use in flag-to-flag races.

This required them to stop their first bike in a specific place relative to the second, preventing them from jumping directly from one to the other.

Silverstone MotoGP: Marquez angry at himself for first FP2 crash