The Austrian manufacturer made its full-time debut in the premier class at the start of 2017, scoring its first points at the second round of the campaign in Argentina.

It has scored points in four more races since then, helped by the introduction of a 'big-bang' style engine in time for the Jerez round, with Espargaro delivering a best finish of 11th at Assen.

KTM lies at the foot of the teams' standings on 22 points, 12 behind rival factory Aprilia, while Espargaro and team-mate Bradley Smith are 20th and 21st respectively in the riders' championship.

"We've had more bad moments than good moments, but this is normal with a project like this one, starting from zero," said Espargaro.

"We have finished in this position after just half a season.

"We know how to improve the bike, and we've just started.

"It's the beginning of this project and we have to be really proud of what we are doing.

"We need to keep pushing, and we need to improve the bike a little more."

Espargaro said the rate of improvement KTM had achieved since he first rode the in post-season Valencia testing last November meant top 10 finishes were feasible before the end of the season.

"Just looking and working, the bike is super-different," he said.

"It's much different to ride than in Valencia, and for the mechanics also to repair, for the electronics to set up the bike.

"If we keep up this progression by the Valencia race it will be a completely different bike.

"I hope that this progression is going like this, we can be in the top 10 fighting in some races." 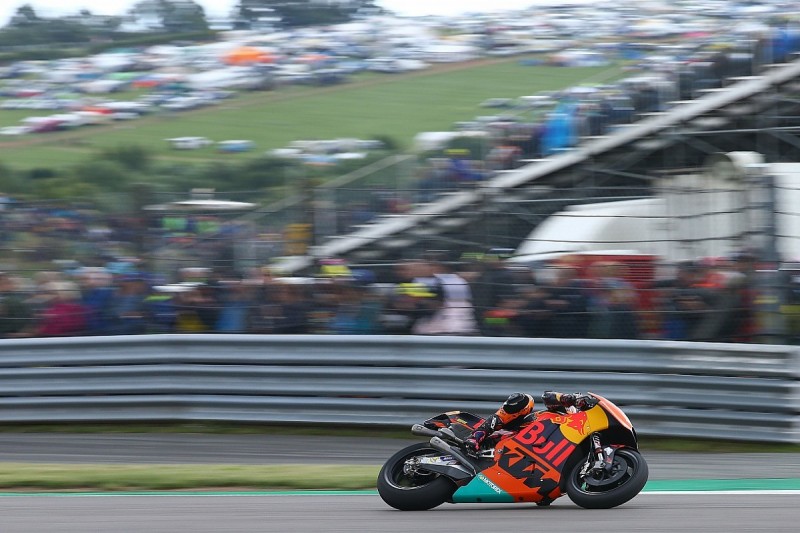 Espargaro and Smith will take part in a two-day test at Aragon on Thursday and Friday alongside test rider Mika Kallio, who made a wildcard appearance in last weekend's Sachsenring race.

Smith said improving the RC16's turning ability was at the top of its agenda.

"I think all three riders are working on [turning], and we'll continue to try to figure out what we need from the motorcycle to be able to do it," said the British rider.

"For all three riders it's on top of our priority list to get a grip on, and that will be the main target of the Aragon test, to get something a little bit stronger for part two [of the season]."

Folger: More to come after breakthrough MotoGP podium in Germany