Espargaro showed well in the short FP4 session before qualifying and set the ninth fastest time after following Tech3 Yamaha rider Johann Zarco, who was second.

Spaniard Espargaro then crashed in Q1 and was only 18th, one position ahead of his team-mate Bradley Smith, and said he had been "a little nervous" about the prospect of making Q2.

"In FP4 where I had Zarco in front and I was managing, letting him go and catching him back, it was a surprise, the performance of our bike.

"I was on the laptime of the top guys and it's a shame [I crashed] because it was the first time we were fighting for the Q2 under normal conditions.

"Maybe I got a little bit nervous and overpushed the limit a bit too much and crashed.

"[But] even with the crash I feel really happy because I showed to the team and they showed we can do it and the bike is on the level so this is nice.

"We need to get used to these conditions and the feeling of fighting for the top 10, and we need to work harder and be in this situation more often to not make these mistakes."

Espargaro was part of a group of five riders, including race winner Marc Marquez, to pit on the second lap of the race at Brno and found himself in 12th when the rest of the field went in to change to dry set-up bikes. 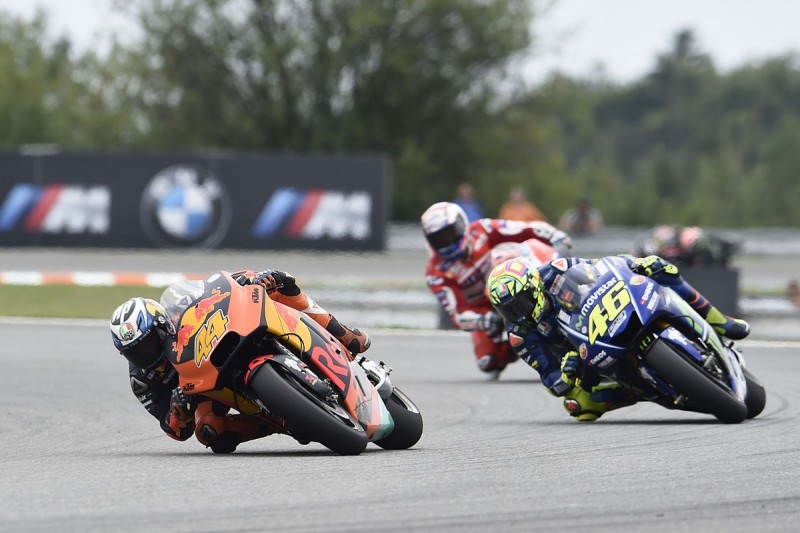 He then passed Jack Miller, Scott Redding, Alex Rins and Karel Abraham and only ceded a position to Valentino Rossi to climb to ninth at the finish - KTM's best result since joining the premier class ranks.

But Espargaro had an off-track excursion midway through the race and ran wide on the gravel, which he felt cost him a shot at finishing further up.

"[It was] my mistake and I apologised to the team because I lost a lot of time there and we could finish in seventh," said Espargaro.

"I went wide on the gravel and I lost more or less five-six seconds in that lap.

"Considering this - that I needed to overtake many riders during my race, I finished in ninth position and we could have been even further up - it's amazing.

"I'm super proud of the team because this is a teamwork, after Aragon we improved a lot the bike and we are showing that we can do it."

Why Rossi can defy time in the 2017 title race