Francesco Bagnaia set a new lap record on his way to the top of the timesheets in FP2 for the MotoGP German Grand Prix, leading a Ducati 1-2-3.

Having topped the morning 45-minute practice, Ducati’s stranglehold in Germany continued into the afternoon when Bagnaia went fastest of all with a 1m20.018s to beat the absent Marc Marquez’s existing lap record.

It only took five minutes for Friday morning’s best time of 1m21.479s to be beaten in the sweltering afternoon conditions at the Sachsenring.

Pramac’s Jorge Martin, fresh from arm surgery two weeks ago, set the early pace on his Ducati with a 1m21.296s.

This only kept him top of the pile for around a minute, when KTM’s Miguel Oliveira went fastest with a 1m21.166s.

Martin found a 1m21.136s shortly after that to return to the top of the order, before Aprilia’s Aleix Espargaro dipped into the 1m20s for the first time with a 1m20.789s.

The Spaniard, who comes to Germany second in the standings and 22 points adrift of Yamaha’s Fabio Quartararo, ran Aprilia’s new aerodynamic fairing in FP2, with team-mate Maverick Vinales starting the day on it. 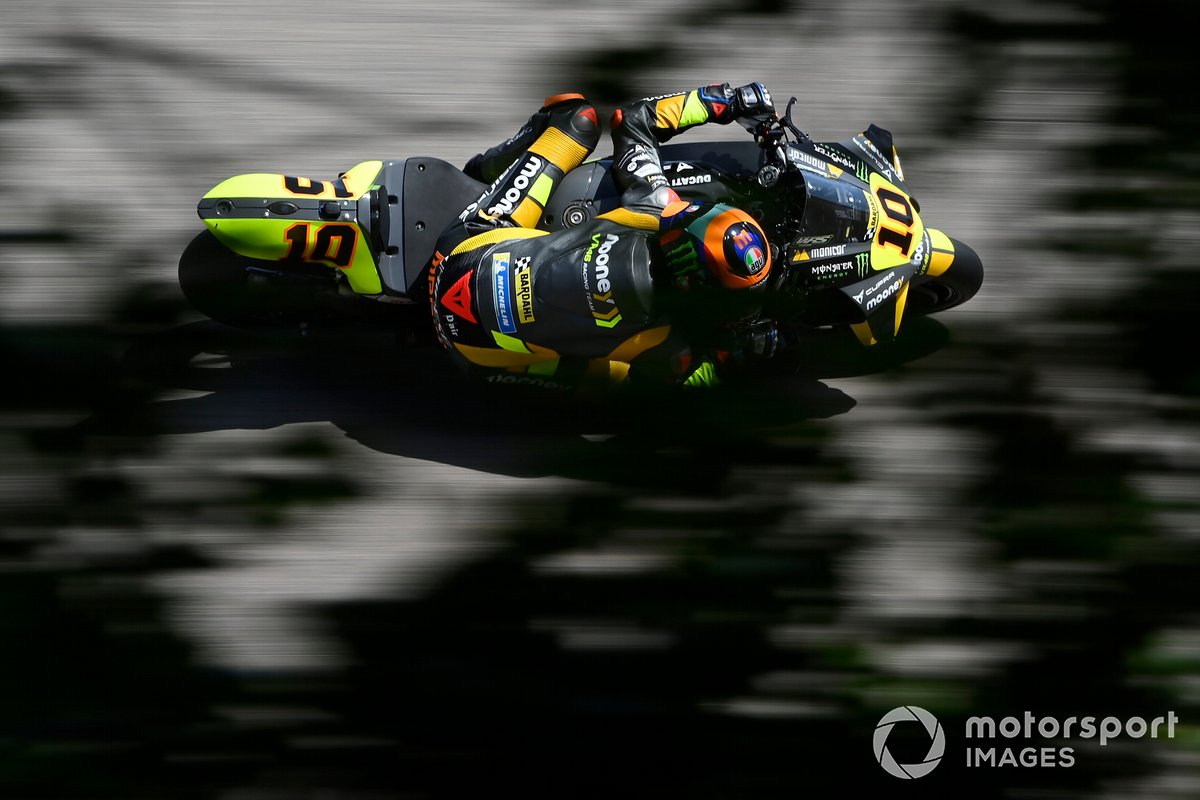 His 1m20.789s kept him at the top of the timesheets until the final six minutes, when FP1 pacesetter Jack Miller lit up the timing screens to blitz his way to a 1m20.211s.

This got Miller close to the lap record, but it would be beaten by team-mate Bagnaia when the Italian fired in a 1m20.132s with just over two minutes remaining.

Bagnaia found more time on his final flying lap on fresh soft rubber to produce a 1m20.018s to end Friday fastest of all.

His lap came under threat late on from VR46 Ducati rider Luca Marini, though he would miss out by 0.115 seconds in second.

Miller completed the top three a further 0.078s adrift, with Aleix Espargaro fourth on his Aprilia.

Gresini rookie Fabio Di Giannantonio jumped up to ninth late on to head Joan Mir on the first of the Suzukis, as the 2020 world champion tested a new aero package.

Team-mate Alex Rins gritted his teeth through his left hand fracture problems to narrowly miss a provisional Q2 spot in 11th, 0.017s behind Mir, while Takaaki Nakagami was 12th on his LCR Honda ahead of Gresini’s Enea Bastianini.

Pol Espargaro was the leading factory team Honda in 14th, while Oliveira faded to 17th on his KTM.