Gresini’s Enea Bastianini snatched a maiden MotoGP pole for the Austrian Grand Prix ahead of Francesco Bagnaia, as main title rivals Fabio Quartararo and Aleix Espargaro were fifth and ninth.

Already a three-time winner in MotoGP this year, Bastianini finally added a pole position in the premier class to his credit after beating Bagnaia by 0.024 seconds at the death of a tight qualifying.

Having come through Q1 after an FP3 fall, Aprilia’s Aleix Espargaro set the early pace with a 1m29.255s, before Jack Miller on the factory team Ducati edged ahead with a 1m29.164s.

The pair traded top spot on their second laps, Espargaro improving to a 1m29.032s before Miller fired in a 1m28.898s.

Espargaro would find himself shuffled back to fifth after the first run, and could do no better than ninth after his 1m29.032s was cancelled for exceeding track limits.

With just over three minutes of the 15-minute Q2 session left, Bagnaia mounted a challenge on Miller’s lap with a 1m28.999s before toppling his team-mate’s time with a 1m28.796s.

This looked like it would secure pole for the in-form Italian, but compatriot Bastianini snatched pole on his final lap of 1m28.772s aboard his year-old Gresini-run Ducati.

Miller completed the top three with Pramac’s Jorge Martin fourth and the first non-Ducati rider Quartararo on the factory Yamaha in fifth – the championship leader just 0.231s from pole.

He is sandwiched between both Pramac Ducatis, with practice pace-setter Johann Zarco sixth ahead of Maverick Vinales (Aprilia). 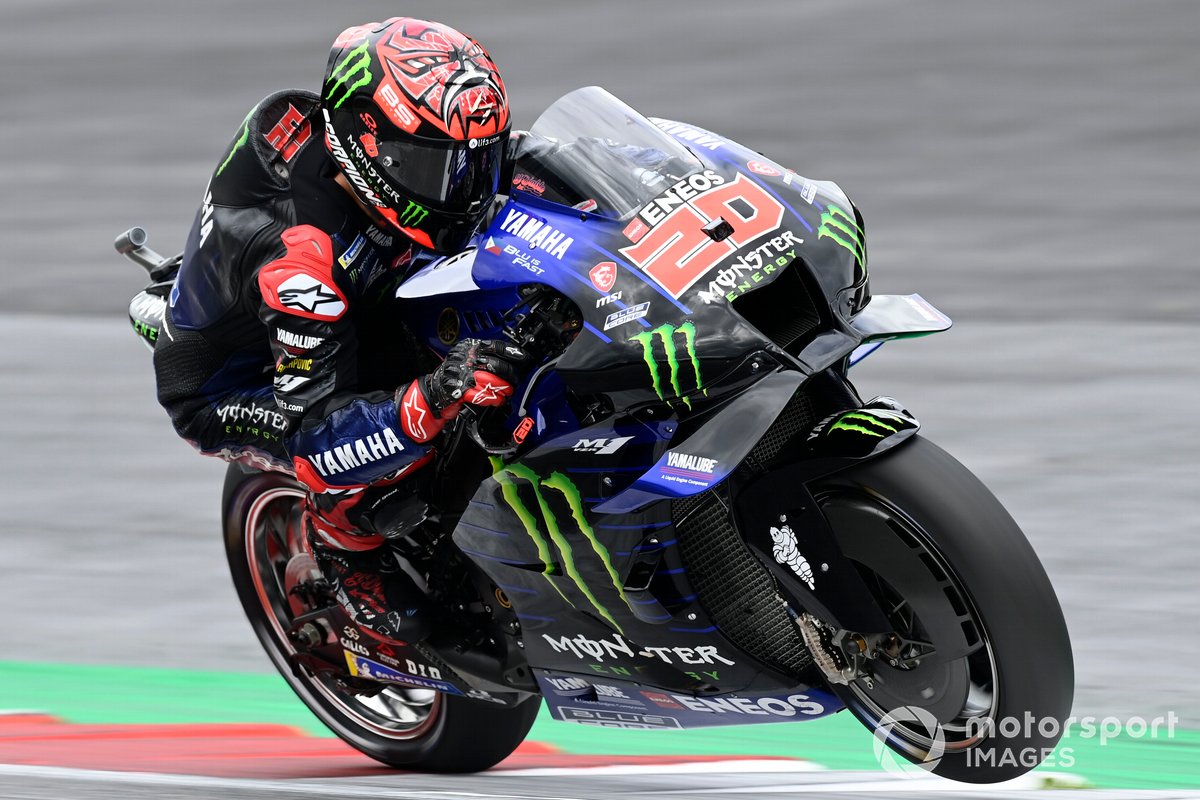 Joan Mir was eighth on the Suzuki ahead of Aleix Espargaro, with Fabio Di Giannantonio on the second Gresini GP21 coming from Q1 to qualify 10th.

Alex Rins was 11th on the second of the Suzukis, with Brad Binder only able to go 12th on his KTM.

VR46 Ducati’s Luca Marini was denied a place in Q2 by just 0.036s and will line up 13th, while a crash for his team-mate Marco Bezzecchi late on in Q1 at the new chicane left him down in 20th.

LCR Honda rider Alex Marquez crashed in identical fashion to Bezzecchi as he was tracking the Italian and paid dearly, the Spaniard starting last as no HRC runner was able to progress into the pole shootout session.

The top Honda was Takaaki Nakagami on the sister LCR bike in 14th ahead of factory team rider Pol Espargaro, with Yamaha’s Franco Morbidelli making a late improvement to 16th.

Miguel Oliveira was a disappointing 17th on KTM’s home turf ahead of Honda’s Stefan Bradl and RNF Racing’s Andrea Dovizioso in his penultimate MotoGP qualifying session.

Behind Bezzecchi came Darryn Binder on the sister RNF bike from Tech3 KTM duo Remy Gardner and Raul Fernandez, with Aprilia wildcard Lorenzo Savadori lining up ahead of Marquez.

The 2022 MotoGP Austrian GP will get underway at 1pm BST on Sunday.