Marquez was at the centre of controversy after the race at the Autodromo Termas de Rio Hondo race, attracting attention from the stewards for collisions with Aleix Espargaro and Valentino Rossi.

The second collision, which drew harsh criticism from both Rossi and watching pundits, came as Marquez scythed his way back through the order after serving a penalty in the early laps as a result of illegally returning to his grid slot after stalling his works Honda on the grid.

But when he explained that sequence events after the race, Marquez said there was no marshal instructing him to leave the grid when he indicated he had stalled, and that he was later given the all-clear to start along with the rest of the pack.

"When I start to arrive on the grid I had a problem with the engine and I stop - normally it never happens," Marquez said.

"In that case I put my hand up, but nobody was there. "Then I started to push my bike.

"Luckily the bike runs and at that time I didn't know what I needed to do - I knew that if the bike was [not running] I need to go off [the grid], but the bike was running.

"I asked [the marshal], because he is connected directly with race direction and I asked him, 'pitlane, or grid?'

"At that time he didn't know what was going on, and then I saw another guy.

"This marshal just put his hands out of my bike, and the other one made like this [a thumbs up], and I just understood that they start to go away and that I need to go my grid place.

"Then I start the race [and a] 'ride-through penalty' appears on the dashboard, something that I didn't understand, because if one marshal says you are allowed, why then in a few laps say you are not allowed and you need to have a ride-through?" 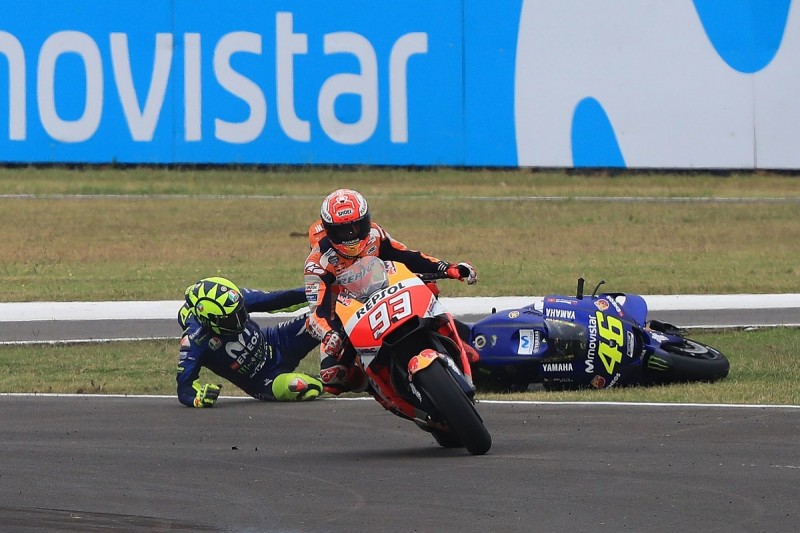 Honda team principal Alberto Puig backed up his rider's version of events, while admitting that the incident was the starting point for Marquez's incident-strewn race.

The reigning champion finished fifth on the road after his collision with Rossi, but was classified 18th after being handed a 30-second time penalty after crossing the line.

"For sure, the rider acted on what he thought and what he believed," said Puig.

"When he was seeing that situation - you can imagine, when you're on the starting grid, and you have 20 riders behind with engines on, you want to be in the same position - so he went to his position because he thought the marshals were telling him to go there.

"And nobody could take him out from that position, so that was the starting point of not a very good race."