Pedrosa was an early casualty at the Autodromo Termas de Rio Hondo, as he was the victim of a highside at Turn 13 that followed Tech3 Yamaha's Zarco attempt to muscle his way by in the battle for third.

While the two did not make contact, Zarco's move put Pedrosa onto a part of the track that was outside the racing line and was still wet from an earlier shower, giving him little chance of staying upright on his slick-shod Honda.

Zarco explained afterwards that he had been keen not to allow early leader Jack Miller and Marc Marquez, who was later penalised for illegally taking his grid slot after stalling his bike, to escape.

"Marc and Jack were in front and Dani [was] in third position and I felt I had a better pace and I didn't want to miss this pace from Jack and Marc," said Zarco.

"With these tricky conditions I tried to do that [overtake] in Turn 13.

"There was one good line, for the laptime, and another line inside [that was] still dry, so [I was] able to try the manoeuvre.

"I took this decision and I went wide to at least overtake Dani, even if I was going to lose a few positions because then Alex [Rins] immediately overtook me.

"Dani crashed, sorry for him.

"The wet patches on the outside, we knew they were there, but if you want to overtake you have to try.

"When I did it, my place was dry, and I did not even touch him."

Pedrosa will have an examination to assess a possible fracture of his right scaphoid.

"There's not much to say about the race," Pedrosa said in a statement.

"My race ended before I finished the first lap. Race direction needs to look after every rider's safety.

"Right now I have a lot of pain in my right wrist. I'll have it checked again in Barcelona on Tuesday." 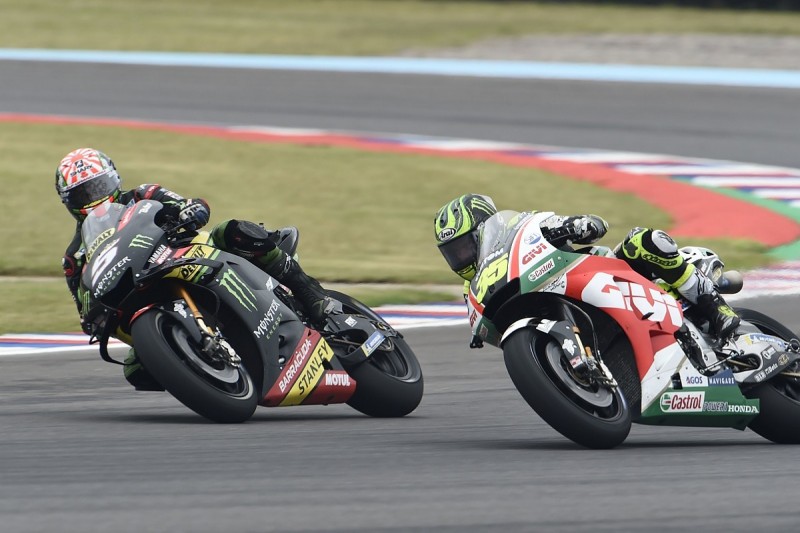 Zarco went on to finish second behind Cal Crutchlow, but felt a maiden MotoGP win had been possible when Marquez served his ride-through.

"All the weekend I was crossing my fingers [that I would] be able to fight for a victory," said Zarco.

"[Marquez] was much stronger but he had a complicated race.

"From the moment he went to the pitlane [to serve his ride-through penalty] I was thinking it was possible to win, so I stayed focused for that.

"[On the] last lap I was close but now I [have] heard that Cal was managing the race better than me, so second is just fantastic after a stressful Sunday."