Jack Miller says he was trying to keep his emotions in check during a bizarre grid sequence for MotoGP's Argentine Grand Prix, in which he was given a headstart by organisers

Shock polesitter Miller was the only rider to go to the Termas de Rio Hondo grid on slick tyres in the changeable conditions, with everyone else coming to the grid on wets.

However, with the track rapidly drying out after a brief shower, every rider bar Miller returned to the pits to make the switch to slicks, leaving the Pramac Ducati rider alone on the grid.

Race Direction took the decision to delay the start for safety reasons, but after a heated meeting among team bosses, it was decided to compensate Miller by giving him an advantage of six rows on the grid over the remaining 23 riders.

There was then further drama as Marc Marquez stalled immediately before the start, only to bump-start his works Honda to life again and retake his grid slot.

"I tried to ride smart, especially in the first laps with all the commotion that went on on the grid and stuff like that," Miller said.

"I just tried to keep my emotions in check and be as mature as I could be I guess, which sometimes isn't my strong point. 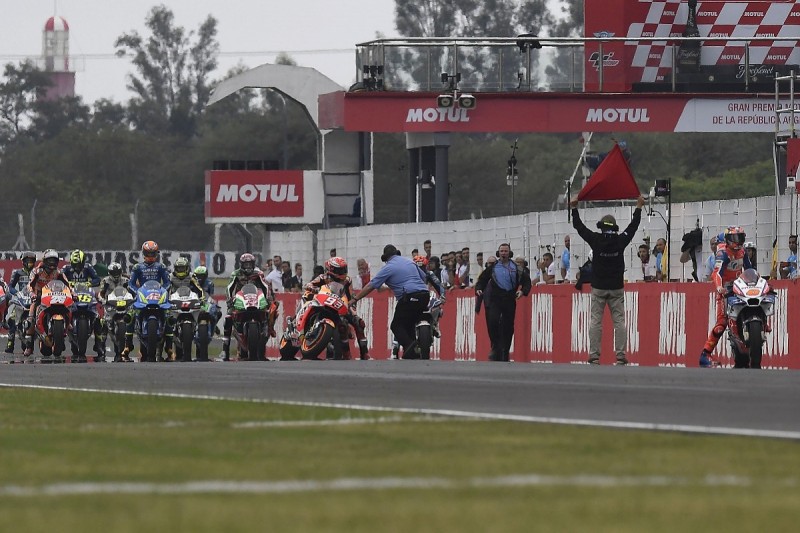 "I feel we did the right thing, and we can't say that anyone else did the wrong thing but it felt strange sitting on the grid when there's meant to be 24 bikes around me and there wasn't one. It was different.

"Then it started raining again and I was just thinking, 'oh Jesus, it's going to be a nightmare!', and then Marc's bike stopping on the grid, it was just chaos everywhere."

Miller was overtaken by a charging Marquez for the lead on lap two, but regained the lead when the reigning champion was forced to serve a ride-through penalty.

The Australian eventually made an error while being pressured for the lead by Cal Crutchlow, also dropping behind Johann Zarco and Alex Rins and finishing fourth on his second Ducati start.

"It's a bit bittersweet," Miller admitted. "After leading the race for so long, the pole and everything like that, it hurts a little to not come home with the podium, but all in all it was a good day.

"Just a couple of costly mistakes later on in the race at the front, feeling a little bit of pressure from the rear, ran wide at the last corner onto the wet stuff and then tried to make it all back up at Turn 1 and ran nearly off track, on to the wet shit again."