Joan Mir admits he is now feeling "a bit more pressure" in the MotoGP title fight, as he leads the standings by 14 points ahead of the European Grand Prix

The Suzuki rider strengthened his lead in the championship with a third-place finish in the Teruel GP last month, while Petronas SRT's Fabio Quartararo struggled to eighth.

Mir has so far refused to focus fully on the championship battle, repeatedly stating doing so would be a "mistake".

But with just three rounds to go in 2020 and six riders covered by 32 points ahead of this weekend's first Valencia race, Mir admits the pressure is beginning to mount.

"Yeah, for sure I'm feeling a little bit more pressure because the championship is getting closer," Mir said of Thursday at Valencia.

"So, every one of us feels this is going to finish soon. So, just enjoying the moment.

"We will see the positions we will finish on Sunday. I'm confident I can do a good job and in the end, we will see where we are."

Currently Mir, Quartararo, Maverick Vinales, Franco Morbidelli, Andrea Dovizioso and Alex Rins have a shot at winning the championship, and of all of them Mir is the only one to have won a race yet.

But the Suzuki rider admits he "doesn't care" about the other five riders and their positions in this championship battle, and is simply focused on his own race.

"Honestly, I don't care about the others," Mir said when asked if there was less pressure being a title protagonist in a large group. 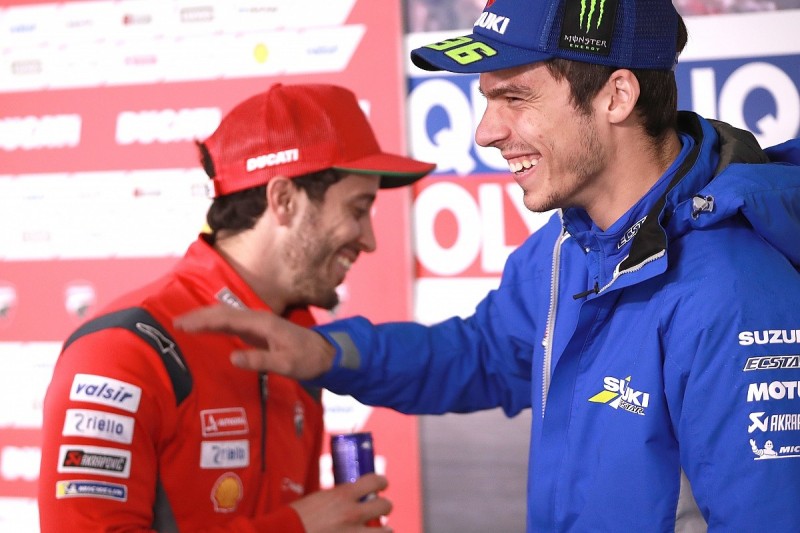 "I just care about my feeling, to get that great feeling on the bike, to give my 100% in all the weekends.

"At the end, we are in this position with three races to go that is not bad.

"But it's important to continue like that. For sure, we can see that there are a lot of riders, championship contenders, more than normal.

"But it is what it is, I don't care about the others."

Mir took over from Quartararo at the head of the championship after the SRT rider finished 18th in the Aragon GP.

Quartararo admits it was "tough to reset" after his tough Aragon double-header, and concedes he initially felt more pressure trailing in the championship having led it for much of the season.

"Most of the season I was in front of the championship and I was feeling no pressure," Quartararo said.

"But now I'm second and behind, I feel like I have a little bit of pressure. Actually, right now I feel much better, the confidence is here and of course we have a lot of contenders.

"We see that this year with the amount of races we've had, we've not so many points compared to the past years.

"So, everything can happen, 75 points in the game, so I think all of the riders that are here [in the top six] can win the championship easily.

"We need to stay focus and don't lose it, we have to try to take it race by race. I think it's the only way we can fight for the championship."