Marquez retired with smoke pouring from his engine at the end of the Hangar Straight while running third behind Valentino Rossi and eventual race winner Andrea Dovizioso.

Vinales, who was running fourth just behind Marquez at the time, said: "I just saw the explosion in my face.

"It was quite scary because I didn't know if it was oil or water, so I just braked maybe 30 metres earlier than I was braking before.

"I was happy that the oil or water did not touch the wheels because if it did it was a big disaster."

Vinales said the time he lost due to Marquez's failure proved costly in his bid for victory, where he came up short by 0.114 seconds to Dovizioso.

"I lost a lot compared to Valentino and Dovizioso in that braking point and they went away a little bit," he added.

"I felt really great on the bike from the first lap, just trying to save tyres until the end.

"It was quite hard when Dovi and Marc overtook me because I knew my strongest point was at the end, the last 10 laps - so I pushed at my 100% in the last five laps.

"We were able to catch back up and try to fight for the victory, and the bike was working well, so I am happy for that."

Marquez admitted the engine failure, which cost him the points lead to Dovizioso, could be a severe blow to this 2017 title hopes.

Dovizioso and Rossi were both made aware that Marquez had retired behind them, and Rossi said it was useful to know the former championship leader had hit trouble. 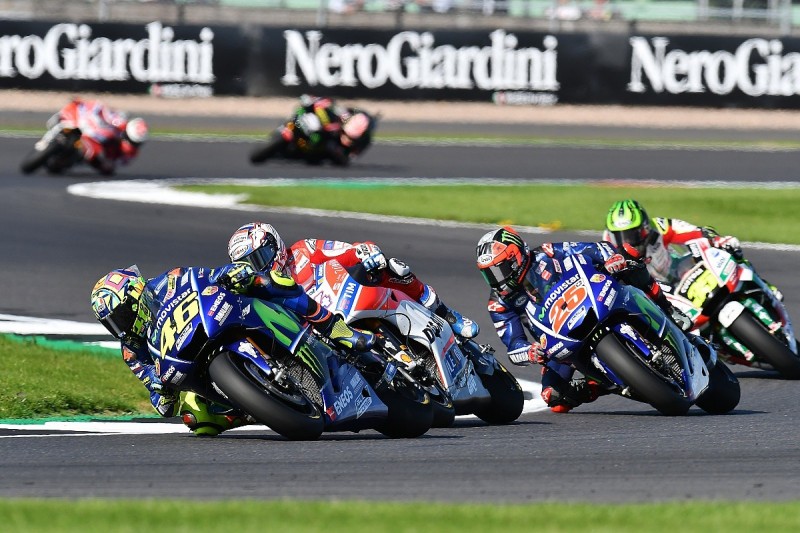 "I saw 'Marquez out', it's important to know during a championship fight like this," said Rossi.

"But nothing changed for me, I wanted to try to win, and I try at the maximum.

"It is not one race to go, it is six races to go, so you have to give the maximum anyway."

Dovizioso also received a signal about Marquez, but he said he was unaware he was fighting Vinales rather than Rossi for the victory at the end.

"I saw 'Marc out' one lap, but for the last five laps I didn't know it was four riders [at the front], I thought I was alone with Valentino.

"When I saw [Marquez was out] it didn't change my strategy because I felt comfortable.

"I saw Valentino drop a little bit, I saw him struggling with the rear tyre, so I thought I had to take this opportunity, to fight for it.

"At the end Maverick came back and I pushed 100% and it was very close, but I was able to manage it."

MotoGP to agree three-year deal with Buriram circuit in Thailand