Marc Marquez says he is “impressed” by his charge from 20th to seventh in the MotoGP Dutch Grand Prix and felt his Honda had podium potential at Assen.

The six-time world champion crashed in qualifying on Saturday and was forced to start from 20th on the grid for Sunday’s 26-lap Dutch TT.

One of only three riders to go for the soft rear, Marquez had leaped up to 12th after the first lap and would go on to finish seventh, narrowly pipping Aprilia’s Aleix Espargaro after a late battle.

The German GP winner expected Assen to be a tougher weekend owing to the physical nature of the track, particularly on his weak right shoulder.

But he admits this was the first race he finished on a clockwise circuit in 2021 where his physical condition was “in a good way” at the end of the grand prix.

“Today was not easy to approach the race starting on the last row of the grid, but I pushed a lot in the beginning, I used a lot of energy,” Marquez said.

“I was impressed by my performance during all the race and I’m proud because it’s the first race on right corner circuits that that I finished more or less in a good way.

“Of course, I had arm pump and I was struggling, but also this track is really demanding about physical condition.

“The bike today had the performance to finish in the podium and this is something that makes me happy.” 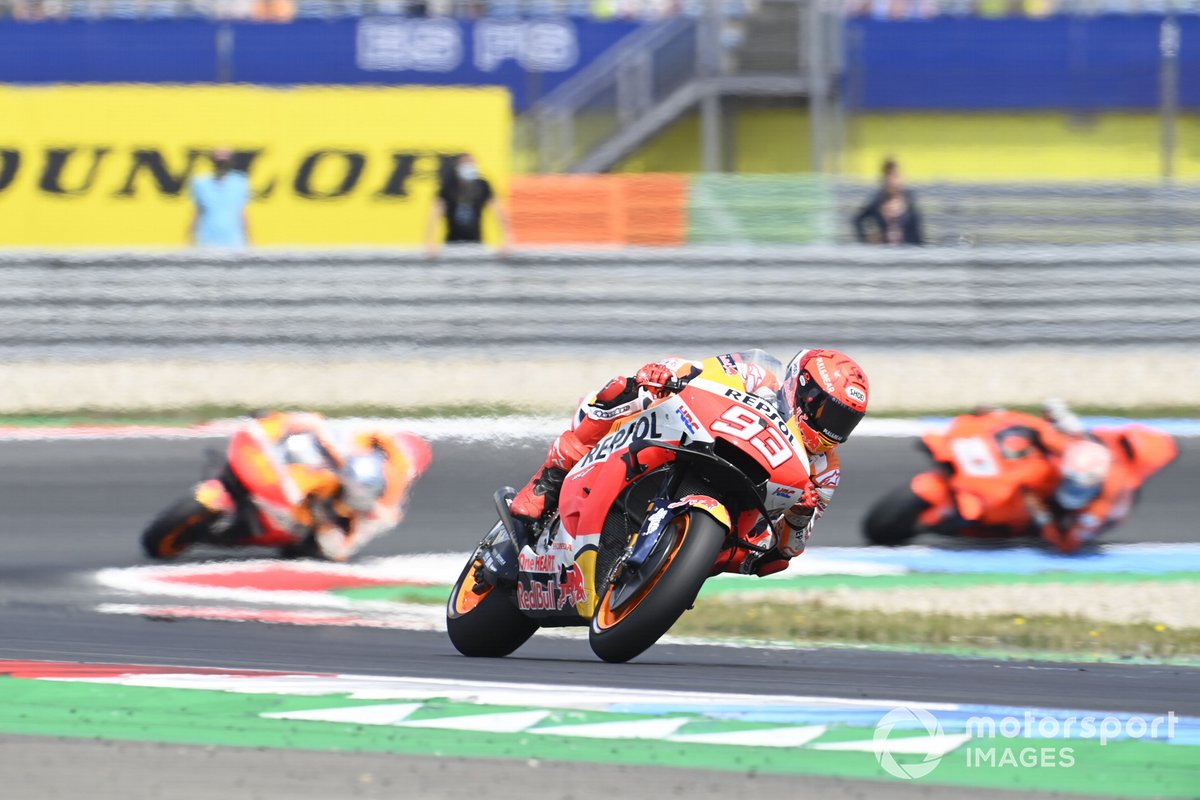 Marquez was left battered and bruised after a heavy highside in FP2 on Friday at Assen, which required him to go to hospital for scans on his ankle.

An electronics issues was blamed for his crash, with Marquez admitting he was “angry” after it - before Honda found a fix for Saturday which made him feel “more safe” on the bike.

“Yeah, of course the weekend was not an easy weekend with the big crash on Friday,” he added.

“But of course, about physical condition, especially yesterday, it was quite difficult.

“But it’s true that the first thing when I came back to the box, I just said thanks to all the team and to all the engineers from HRC because on Friday I was quite angry about what had happened and from one day to the next they did a really good job, they changed a few parameters on the electronics side.

“This on the mental side is easier to get the confidence again, so that was a big help, that quick reaction.

“Also, the bike was working better and I felt more safe. It’s true in qualifying it was my mistake more than the bike, but it was a consequence from Friday.”