Marquez and Pedrosa were among the stronger riders during practice at Misano, but having qualified fourth and eighth they opted for different tyre strategies for Sunday's race.

While most riders used the medium of the three front-tyre compounds, Marquez selected the hard, and Pedrosa the soft.

That worked in Marquez's favour early, as he ran third behind Yamaha pair Valentino Rossi and Jorge Lorenzo, but he faded to finish a conservative fourth as Pedrosa stormed to his first victory of 2016.

With Rossi and Lorenzo finishing second and third, Marquez still leads the championship by 43 points over Rossi with five grands prix remaining.

"Today's race was complicated and it was perhaps not one of my better days," Marquez admitted.

"I went out with great desire and I felt strong, able to recover the ground I had lost in the first few laps and close in on Valentino and Jorge.

"Then I saw I had problems with the front tyre, because I was losing it a lot.

"When Dani passed me, I tried to follow him, but I saw that it was more likely that I would crash than finish on the podium, so I concentrated on finishing the race.

"We have to keep improving, but the positive thing is that we only lost a few points during a weekend that had been good but that we weren't able to capitalise on in the race." 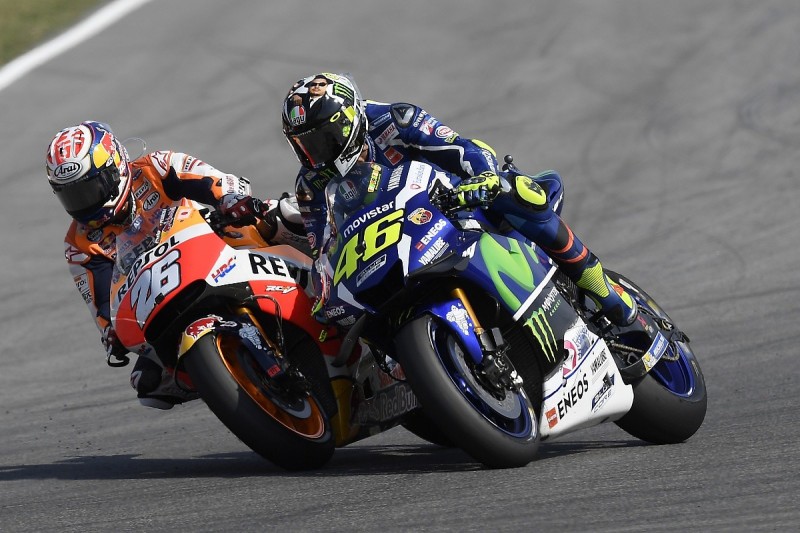 While Pedrosa's tyre choice was ultimately spot on, he was quiet in the first third of the race, running fourth and noting he was "alone for many laps. I wasn't really losing or recovering".

With his first victory since last October's Malaysian Grand Prix, and after a tough first half of the season, Pedrosa moves back up to fourth in the championship.

"I was worried at the start of the race," he said.

"I never used this tyre in hot conditions, I only used it in the morning practice. But my feeling was better with that tyre, I don't know why.

"The pace was really strong, in the middle and the end of the race. I just kept focused and doing my thing every lap.

"Little by little I could see I was starting to catch them, I knew the key was not to make any mistakes, and try not to fight much.

"A little later I could see I could catch Valentino, so I tried to keep focused for last part of the race, and actually take the chance for a victory today."