The Spaniard has managed only one podium finish in his 12 MotoGP starts since moving to Ducati from Yamaha, while team-mate Andrea Dovizioso has won four times and leads the championship.

Lorenzo says the situation has improved over the season, but not by enough and that he is still unable to extract the maximum from the bike.

"In the first part of the season, I had problems with the lack of front contact so with the experience I have with this bike and the way you have to ride this bike, still I don't get the maximum," said Lorenzo.

"I believe I can do better. Little by little, the team is working on the aspects that I think the bike still needs to improve for the future, for next year.

"We are getting some improvements in the last months, so also working through the settings to make the bike, especially for Dovi, even better and have more contact.

"But there is still a long way to work for the future to improve our weak points with this bike.

"The team is working to make the bike better suited looking to next year."

Lorenzo says that, despite his struggles, he is more confident in the bike now than he was at the start of the season.

Although his sole podium of the season came in the Spanish Grand Prix in May, his recent performances have been more consistent - qualifying and finishing in the top five in the recent Austrian and British Grands Prix. 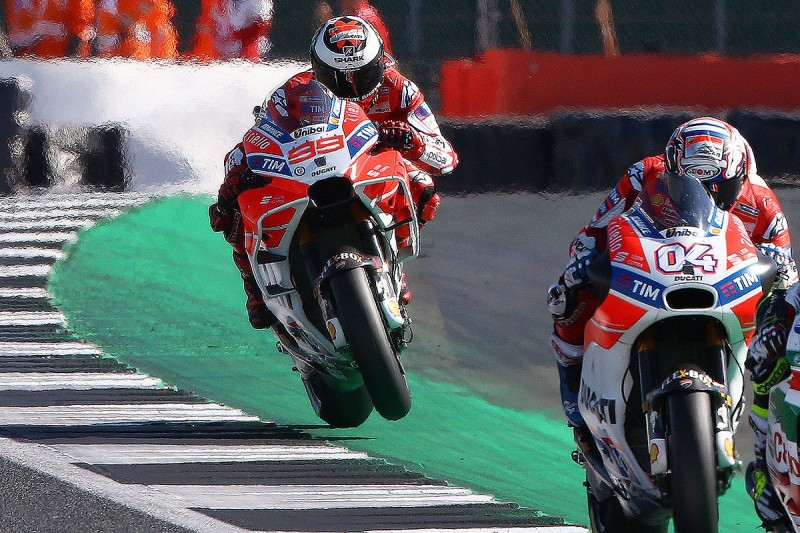 "Yes, it was," said Lorenzo when asked if his Silverstone ride was his best of the season. "It was in Austria, now it's here.

"I was closer, one position worse, but three seconds better [relative to the lead].

"We are getting much closer, I feel much more confident with this bike.

"I know the bike much more, especially to manage the degradation of the tyres.

"Until now I open the throttle more similar to the way I did with Yamaha, but with this bike you have to change a little bit to win the race.

"Finally I understood the way to keep more the tyre, this will help us at the next tracks."

Dovizioso believes Lorenzo's arrival at Ducati this year has played a part in supporting his feedback on the bike, but has not had a big impact on the overall competitiveness.

"My crew worked very well during this season, also last year, but this year even more," said Dovizioso.

"That made the difference in most of the races, especially when you have to manage the tyre and you have to take the right decision, in the way you have to ride the bike in the race.

"The arrival of Jorge helped to confirm to the engineers how is the bike.

"So it didn't help to improve a lot the bike because we didn't change a lot from the winter to now, but everything helps."