The Italian, who took his maiden win last year in the Austrian Grand Prix, was overlooked by Ducati in favour of Andrea Dovizioso for this year due to the arrival of Jorge Lorenzo from Yamaha.

While Dovizioso has outshone Lorenzo, winning four races with the Italian manufacturer and leading the standings with six rounds to go, Iannone languishes 16th in the championship with just four top 10 finishes to his name for Suzuki.

He has not qualified on the front three rows of the grid in any of the last eight races.

"We still have some problems which we have been unable to solve so far," said Iannone at Silverstone, where he crashed out while running in the lower reaches of the points positions.

"We've improved on some points, but I'm still lacking some effectiveness in the exiting of corners.

"I have a lot of slide, a lot of [rear wheel] spin, it's very difficult for me to control.

"We have some difficulties in the corners, we don't have very good grip with the throttle, and we struggle a lot, especially in this track.

"We are not turning well in fast corners, so the situation is a bit more difficult.

"We try to improve, we changed the setting on the bike but we don't get the improvement and we remain on the same level.

"I try to react every weekend, every race, but it's very difficult. I will never give up."

Team-mate Alex Rins matched his best finish of the year with ninth at Silverstone, which was his strongest result since returning from injury after missing five races.

Team boss Davide Brivio described the weekend as "another big step" for Rins, while conceding that Iannone "couldn't capitalise on the positive improvements we made during the warm-up where we found an effective set-up". 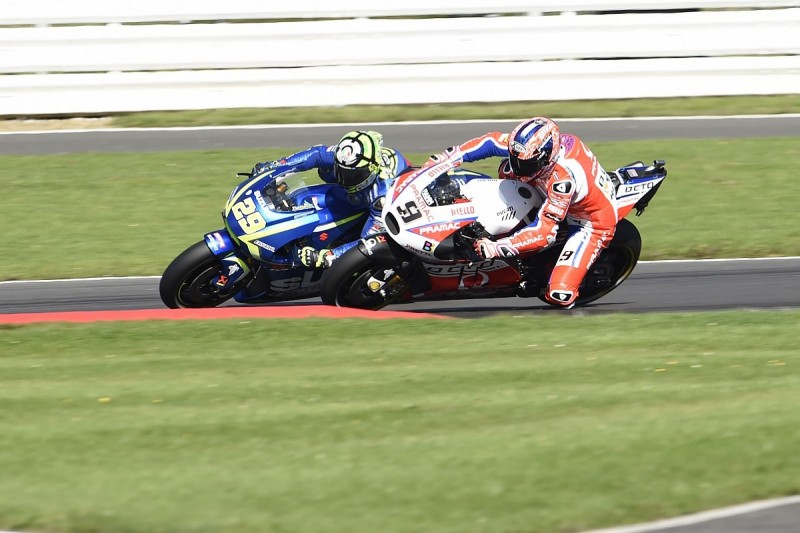 All clear with Petrucci after crash

Iannone fell as a result of Aleix Espargaro and Danilo Petrucci battling in front of him at Abbey corner, and he collected the latter in the process.

Petrucci called the accident "scary", but Iannone said there were no hard feelings between the two.

"Aleix overtook Danilo and they were very close, I think they touched," said Iannone.

"Danilo went out [wide], and when he came back, crossing the [racing] line, I braked to try not to touch him but I lose the front before crashing, before I touched him.

"I talked with Danilo, he doesn't have a problem, he understands the situation."