Ducati's 2017 MotoGP bike is "more comfortable everywhere", Andrea Dovizioso believes after his first two days on it at Valencia

The Italian manufacturer has improved its technical package since Luigi Dall'Igna was appointed to lead the programme in late-2013, and won its first races in nearly six years this season.

While Ducati's Desmosedici has the best acceleration and straightline speed in MotoGP, Dovizioso and now-former team-mate Andrea Iannone have highlighted weaknesses in turning the bike.

Following early work done by test rider Michele Pirro, Dovizioso focused on the 2017 package during Tuesday and Wednesday's test at Valencia, and believes small improvements have been made across the board.

"I think we have to be happy about the speed we have, for sure still we have to improve something for race distances," he said.

"Still the turning is something we have to improve. I think the bike is more comfortable, everywhere.

"We tried something more or less everywhere, also [suspension] from Ohlins and it was interesting, and the engine is a little bit smoother.

"A small step everywhere, and we confirmed the speed."

Jorge Lorenzo and Dovizioso were third and fifth-fastest on Tuesday, with Dovizioso third and his new team-mate eighth on Wednesday.

Changing direction at high-speed has been an issue for Ducati in recent years, while Dovizioso and Iannone also discussed how physical the 2016 bike was during the season. 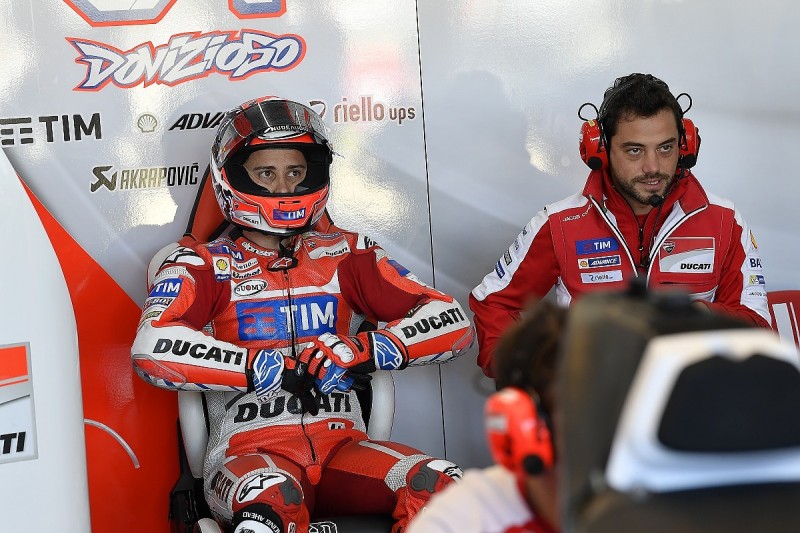 Dovizioso said the two were connected, and that early gains had not really made the bike less physical.

"Still that point is something we have to improve, because I think it's related to turning," he said.

"But more comfortable, I mean some vibration, but the way to make a lap time I think is safer.

"Still, the turning is something we would like to improve and I think it will be the key to it being easier to keep a good lap time in races."

Lorenzo spent all but one late installation lap of his first day with Ducati on the 2016 bike, but rode the '17 more on Wednesday.

Both factory riders will miss next week's test at Jerez, with Ducati instead sending Pirro, and kept the now-banned winglets on their bikes at Valencia to remove one variable from comparisons with the 2016 bike.

"We decided to keep the winglets to try everything we wanted from the chassis," Dovizioso explain.

"We had to confirm everything, because we will not test again until February.

"It was more important to fix all of these points."