The LCR Honda rider won a pair of MotoGP races this year on his way to seventh in the standings.

He completed the major test at Valencia on Tuesday and Wednesday after the season finale, setting the sixth-fastest time each day.

Crutchlow will not, though, take part in the multi-team test at Jerez next week, instead going under the knife in Manchester on Friday to have the middle finger of his right hand operated on.

The issue is comparable to arthritis symptoms, rather than being the result of an accident.

"I haven't even had it scanned yet," he said.

"I'm having it scanned on Friday morning and operated on on Friday afternoon. I didn't want to know what was wrong with it up until now.

"In the middle of the night I can't move the finger at all.

"After about an hour of the morning it's a lot better and when you're riding the bike with the adrenaline, I don't really feel it, but now it's killing me.

"It's the one I brake with. We'll see what it's going to be and go from there."

Crutchlow's next MotoGP running will be the first official 2017 pre-season test at Sepang, starting on January 30. 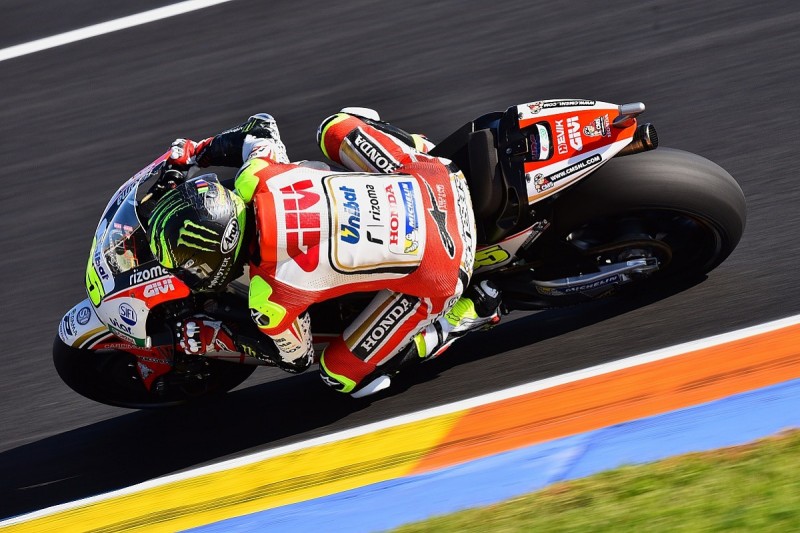 The Briton was also looking at having surgery on his knees, but has elected to postpone that, due in part to having become a father during the year.

"They're worn, just reacting to years of training, running, cycling, many things," he said.

"But if you have your finger done and two knees, how am I going to pick up my kid?

"I'll probably have to suck it up again for another year and see how it is next year.

"I have a couple of cysts in one knee, one on the inside and one on the outside.

"They pop in and out cycling and stuff like that, causes a bit of grief.

"I would like to clear that up, but I don't really have time."

Crutchlow tried Honda's 2017 MotoGP engine in a test at Aragon in September, then used it this week at Valencia.

He also tried a range of other Honda items during the two days, spending part of Tuesday with a Repsol-orange engine cover.

"We tried a few different parts from the Repsol team, but nothing that they've not been using over the year," he said.

"Tuesday was quite positive with our normal bike and then we were going through the motions with the new engine and [on Wednesday] we tested them both back-to-back again.

"Again, there's positives and negatives. I'm sure that Marc [Marquez] and Dani [Pedrosa] will give their comment as well, but it seems we're all saying the same thing as well.

"It's quite good for our direction, if we have one."