Yamaha MotoGP rider Valentino Rossi says the front tyre selection available at the Catalan Grand Prix in "not right", having been on the losing side of a post-Barcelona test vote last month

MotoGP held an in-season test at the Catalan Grand Prix venue, which has been resurfaced and has had a change of layout, in late May to help supplier Michelin define its tyre range for the race weekend.

Rossi, who will line up seventh for Sunday's Catalan GP, has now hit out at the three-compound front tyre allocation in the aftermath of qualifying.

"For me, like we spoke in [the last race at] Mugello, tomorrow will be a strange race because we don't have the right front tyre," Rossi said after qualifying.

"The tyre allocation from Michelin is difficult, is not right.

"At the end the soft is too soft, the medium don't have grip, so will be very difficult, maybe [it will be a] very strategic race, depending very much from the choice."

The seven-time MotoGP champion subsequently told Italian media: "There was a tyre in the middle that could be brought, but for some reason they didn't bring it.

"In my opinion, Michelin is working very well because the tyres have improved anyway - but I have to say that in the last two races they have made the wrong choice of the tyres in front."

When Rossi's comments were put to Michelin MotoGP chief Piero Taramasso, he revealed that a rider vote in the test played a big role in determining the range. 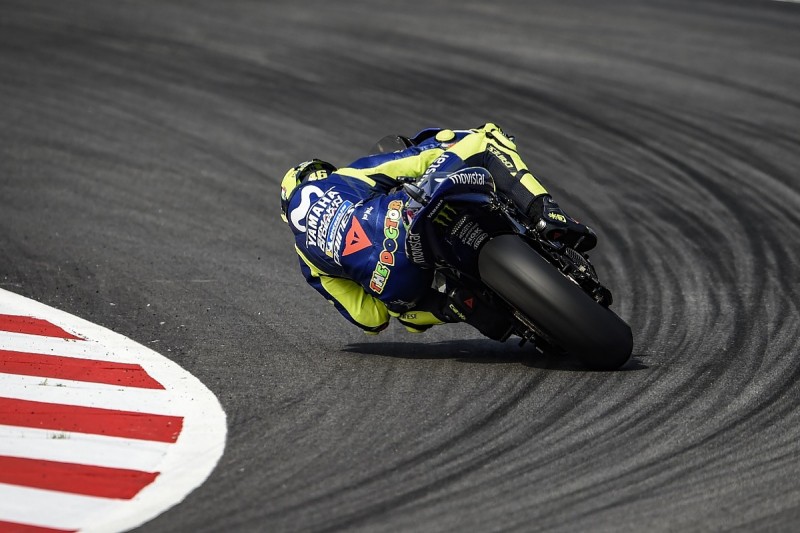 "When we came here three weeks ago, we did the test, most of the riders were there, and they choose the tyre," Taramasso explained.

"We start with the four front and four rear, then everybody agree about the rears, they said we have to take off this one [compound], so we bring the three rears they chose.

"And the choice between two medium, they choose [this] medium. Was a big majority, was 13 riders who said 'we wanted this one', only six said 'we prefer the other one'.

"Valentino was one of the minority."

Asked whether the vote was split between the quicker riders and the rest of the pack, Taramasso said: "In the six that want the other tyre, we have two top riders, one was Jorge [Lorenzo] and one was Valentino.

Michelin had brought four front tyre compounds to the previous round - the Italian Grand Prix at Mugello - similarly following an earlier in-season test at the track.

But, when queried on why a similar approach wasn't adopted for the Barcelona race, Taramasso explained that private testing at Mugello did not allow Michelin to canvass rider opinion the same way as the official Barcelona test.

"Here we did the test with 20 riders, so almost everybody was there, had the chance to test," he said.

"Mugello was just some official [factory bikes], more than half the grid was missing, so you cannot make the choice for the people that were not there."